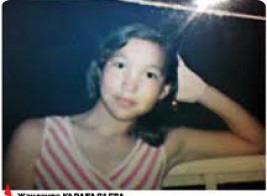 Background information: Zhansaule Karabalaeva, born in 1993, daughter of Kudaibergen Karabalaev, a trade-union activist, a worker of the Management of Hole Bores (UOS-1) of the production branch “OzenMunayGaz”.

On 24 August, 2011 in the suburbs of the city of Zhanaozen (the Western Kazakhstan), Zhansaule Karabalaeva, 18-year-old daughter of Kudaibergen Karabalaev, a trade-union activist and a worker of the Management of Hole Bores (UOS-1) of the production branch “OzenMunayGaz”, was found dead with multiple stab wounds.  The striking oil industry workers link the murder of the girl primarily to the fact that her father, Kudaibergen Karabalaev, took active part in the strike and was elected by the striking workers of the production branch of “OzenMunayGaz” for the position of the head of the trade union of the UOS-1 in the beginning of July, 2011. Thus, Kudaibergen Karabalaev’s colleagues noticed that after he was elected, he has constantly been under pressure.

Zhansaule Karabalaeva, the daughter of the trade-union leader, was last seen on 19 August, after her driving lessons. The striking workers state with indignation that this way the authorities want to intimidate oil industry workers and city dwellers.