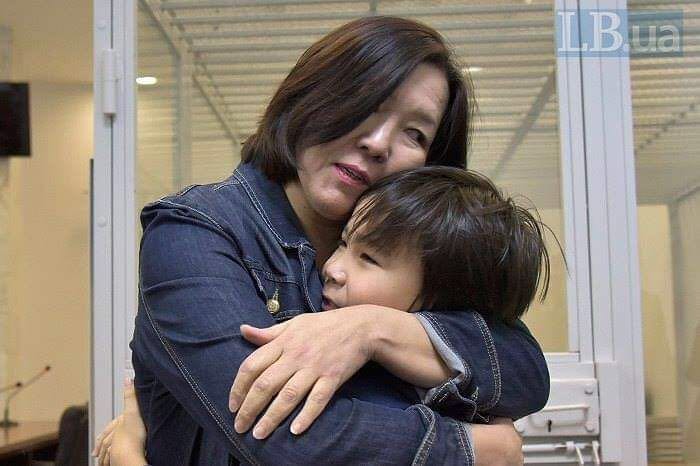 Zhanara Akhmetova risks extradition: a test for the new authorities of Ukraine

On 14 January 2020,
a trial will be held that will finally decide whether the Kazakhstani
journalist Zhanara Akhmetova will be granted asylum in Ukraine. Akhmetova is
one of the leaders of the opposition movement ‘Democratic Choice of Kazakhstan‘
(DCK). The Migration Service of Ukraine has denied granting her refugee status for
two years. In 2018, the Kyiv Court of Appeal and the Supreme Court ordered that
the Migration Service reconsider its decision and take into account the
information about the persecution of Akhmetova for her opposition and
journalistic activities. Still, officials turned a blind eye to this fact and
denied her asylum for the second time.

In case of the extradition
of Akhmetova, Ukraine would violate several ratified international conventions.
For the new government, this case would become one of the first serious exams in
the observation of the rights of refugees and extradition procedures. Will the
new authorities of Ukraine pass the test in the cooperation with dictatorial
regimes?

In October 2017, Zhanara Akhmetova was arrested in Ukraine based on the extradition request of Kazakhstan. This case received wide publicity amongst human rights organisations, the media, MPs and the international community. In November 2017, the court released her from custody.

Kazakhstan put Akhmetova on the wanted list in connection with the ‘fraud’
case in the period between 2005-2008. She was accused of default in connection
with the purchase of real estate and the return of debt. In this case, in 2009,
a Kazakhstani court sentenced Akhmetova to seven years‘ imprisonment. The
execution of the court sentence was delayed until her child reaches the age of
14 (i.e. until 2021).

Since 2013, Akhmetova began to actively engage in journalism and opposition activities. In particular, her articles were published in the opposition newspaper ‘Tribuna’. The newspaper was closed after a Kazakhstani court handed down a suspended sentence with regard to its editor-in-chief, Zhanbolat Mamay, and banned him from engaging in journalistic activities.

Due to Akhmetova‘s journalistic activities, the authorities set her up, using the ‘fraud‘ case. In 2016, an amnesty was declared in Kazakhstan, according to which, as stated by Kazakhstani counsel Serik Aitbayev, Akhmetova should have been released from serving her sentence. But this did not happen even despite the fact that she repaid all civil claims in the case of ‘fraud‘.

In early 2017, Akhmetova was subjected to administrative fines three times for “posting on Facebook, an appeal for an unsanctioned rally.” On this basis, the Kazakhstani authorities canceled the deferral of execution of the ‘fraud‘ case. Still, such legal grounds are not provided for in the Kazakhstani legislation.

In March 2017, Akhmetova, along with her young son, arrived in Ukraine in order to apply for political asylum. The Kazakhstani authorities put her on the wanted list to serve her sentence in connection with her conviction for the ‘fraud‘. However, the real motive for her persecution is political.

Zhanara Akhmetova is one of the leaders of the opposition movement ‘Democratic Choice of Kazakhstan‘ (DCK). On social networks, she criticises the Kazakhstani regime, calls for peaceful rallies and highlights the incidents of politically motivated prosecution in the country.

In March 2018, at the request of the prosecutor’s office, a Kazakhstani court recognised the DCK as an ‘extremist‘ organisation. The court stated that the DCK ‘incites social discord‘ and ‘creates a negative image of the authorities‘. At the same time, on 14 March 2019, in its resolution on human rights in Kazakhstan, the European Parliament noted the peaceful nature of the DCK.

Based on the decision to ban the DCK, in the period between 2018-2019, participants in peaceful rallies were subjected to violent arbitrary detentions, unprecedented in the history of Kazakhstan. During this period, more than 6,000 people were detained, including journalists and human rights activists.

The decision to
ban the DCK serves the Kazakhstani authorities as the grounds for accusing activists
of ‘participating in the activities of an
organisation which has been declared ‘extremist‘ (Article 405 of the
Criminal Code). In the indictment acts in the DCK cases, investigators indicate
such ‘criminal offences‘ as ‘reposting materials from the DCK pages‘, ‘publishing
posts on social networks that discredit the Head of State and the current government‘,
‘chanting slogans at rallies that create a negative image of the authorities‘ .
Based on these charges, three people are currently in prison and more than 16
people received conditional sentences.

It is important to note that in the indictment acts, Akhmetova is labelled the ‘leader of a banned movement‘. Reposts from Akhmetova’s Facebook page became the basis for the criminal prosecution of activists Akmaral Kerimbayeva and Gulmira Kalykova. The authorities of Kazakhstan put forward new charges against Akhmetova, accusing her of ‘being the leader of an extremist organisation’.

Immediately after Akhmetova’s arrest, Kazakhstani pro-government media reported the arrest of ‘Mukhtar Ablyazov’s accomplice’. This was another confirmation of the political nature of the case. Mukhtar Ablyazov is the leader of the DCK opposition movement. The authorities of Kazakhstan have been persecuting him for many years. On 9 December 2016, the State Council of France refused to extradite Ablyazov and emphasised the political nature of the case. The decision noted that Kazakhstan had illegally influenced the Ukrainian and Russian investigations in this case.

In Kazakhstan, several persons accused in the DCK case (Kenzhebek Abishev, Almat Zhumagulov, Ablovas Dzhumayev, Aset Abishev, Erkin Kaziev, Aset Nurzhaubay) were subjected to torture and ill-treatment in an attempt to force them to give testimonies about the activities of the DCK and Mukhtar Ablyazov. The most high-profile case is connected with cruel torture of Iskander Yerimbetov, whose sister is Ablyazov’s counsel. The UN bodies pointed to the torture and demanded that Yerimbetov be released, but Kazakhstan is ignoring the demand.

It is obvious that Akhmetova, as one of the leaders of the DCK, would also face torture in Kazakhstan.

Akhmetova repeatedly reported the fact that representatives of the Kazakhstani special services have been surveilling her and her house in Ukraine. They tried to kidnap her twice. Akhmetova notes that she filed appropriate reports with Ukrainian law enforcement agencies, but they were ignored.

Migration Service systematically refuses the granting of asylum to Akhmetova

On 18 October 2017, the Migration Service of Ukraine denied the granting of refugee status to Akhmetova, having considered that she was being prosecuted ‘on the basis of non-political allegations of fraud’. Akhmetova appealed the decision of the migration service in court. On 27 March 2018, the trial court dismissed her complaint.

However, on 31 July 2018, the Kyiv Court of Appeal and on 17 September 2018, the Supreme Court imposed anobligation on the migration service to reconsider Akhmetova’s report and take into account the information about her opposition and journalistic activities. In a decision of 31 July 2018, the court drew attention to the fact that Akhmetova was a member of the DCK opposition movement, which was recognised as ‘extremist’ in Kazakhstan, and that the Migration Service unilaterally and biasedly examined the information about Kazakhstan.

Still, the
Migration Service, in fact, ignored the decisions of the courts and denied the
grating of asylum to her for the second time on 22 December 2018.

Zhanara
Akhmetova’s counsels point to a conflict
in Ukrainian law that makes asylum seekers defenseless before the Migration
Service. Due to discretion of its authority, the court may establish a
violation of the rights of the asylum seeker, oblige the Migration Service to
reconsider the asylum application and take into account certain facts. However,
at the same time, the court cannot directly oblige the Migration Service to
issue a specific decision, for example, to grant refugee status. Thus,
according to the current legislation, it is possible to win the case with the
Migration Service, and the body, in turn, will formally ‘reconsider’ the case
and, issue the second decision to deny the granting of asylum. Thus, there is
no way to defend in court against the arbitrariness of the state body.

Akhmetova again
appealed to the court, demanding that the court oblige the Migration Service to
grant her refugee status. On 19 September 2019, the trial court dismissed her
lawsuit.

Soon, on 14 January 2020, the appellate court will hold a meeting at which it will finally decide whether Zhanara Akhmetova will be granted refugee status. The court decision will enter into force immediately. Therefore, if the court decides that Akhmetova should be denied refugee status, the procedure for considering Kazakhstan’s extradition request will be resumed immediately. At any time, they will be able to hand her over to the Kazakhstani authorities.

Assistance
rendered to authoritarian states: how to avoid repeating the mistakes of the
past

The practice of recent years confirms that Ukraine violates extradition procedures and renders assistance to post-Soviet countries, such as: Russia, Kazakhstan, Azerbaijan, Tajikistan in their activities connected with political persecution. This is facilitated by its membership in the Minsk Convention on Legal Assistance and informal close ties between law enforcement agencies that have been developed over many years.

In February 2019, a report, prepared at the request of the European Parliament subcommittee on human rights, entitled ‘The Abuse of INTERPOL’s Red Notices and The Impact on Human Rights’ was published. As one of the examples of such abuse, the report cites the case of Akhmetova.

In 2017, in
addition to Akhmetova, Ukraine arrested two more journalists: Fikrat Huseynov
(at the request of Azerbaijan) and Narzullo Okhunzhonov (at the request of
Uzbekistan). International publicity helped prevent their extradition. Human
rights activist Alovsat Aliyev also barely escaped extradition from Ukraine to
Azerbaijan, although he enjoyed refugee status.

The cases when, secretly, with the cooperation of special services, asylum seekers are kidnapped or extra-procedurally expelled from Ukraine, are particularly apalling. Over the past few years, such sad examples have been the cases of Aminat Babayeva, Vladimir Yegorov (they were sent to Russia), and Alexander Frantskevich (he was sent to Belarus).

Previously, the Open Dialogue Foundation has already drawn the attention of the public to the fact that Ukraine remains dangerous for refugees and asylum seekers. According to the ‘Right to Protection’ Charity Fund, in 90% of cases, the Ukrainian Migration Service has denied asylum. According to statistics, in 2018, the courts overturned 39% of the decisions of the Migration Service, which is an indicator of the lack of professionalism of the work of this body and the long-overdue need for its reform.

The support of Ukrainian and international public

In November 2017, the case of Akhmetova was discussed in the Ukrainian parliament at meetings of the Human Rights Committee and the Committee on Freedom of Speech. Ukrainian MPs from different factions stressed that this case had political overtones.

Ukraine will blatantly violate its international obligations if it extradites Akhmetova

Ukraine is a party
to these agreements. Therefore, the extradition of Akhmetova would be a direct
violation of Ukraine’s international obligations. In this case, rendering assistance
to the authoritarian regime of Kazakhstan, one of Russia’s closest allies, would
discredit Ukrainian law enforcement agencies.

President Volodymyr Zelensky issued an instruction to develop mechanisms aimed at simplifying the granting of Ukrainian citizenship to people who became victims of human rights violations in their countries. When addressing the post-Soviet countries, he stated: ‘Look at us. Everything is possible’.

We hereby urge representatives of the civil society, MPs and diplomats to come to the Sixth Administrative Court of Appeal of the city of Kyiv on 14 January 2020 at 10:20 a.m. in order to carry out the monitoring of the case of Zhanara Akhmetova. We wish to draw your attention to the facts that indicate the existence of all grounds for granting her refugee status. Ukraine should not allow the extradition of an opposition journalist to the authoritarian regime of Kazakhstan.