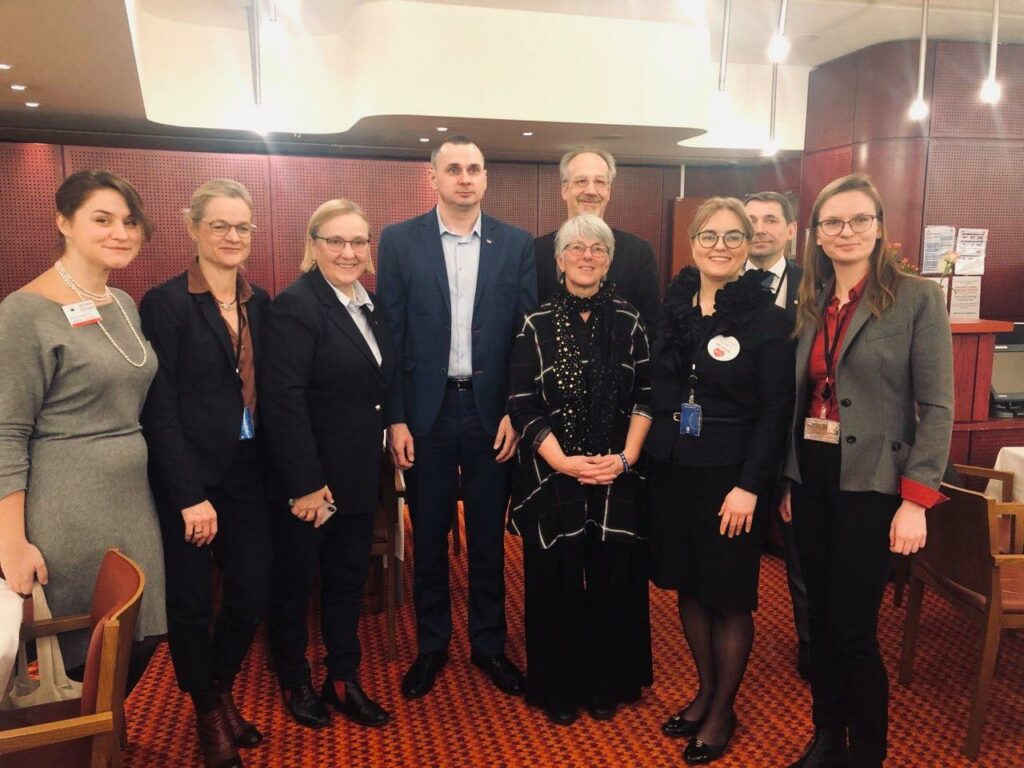 On 26 November 2019, the Open Dialogue Foundation (ODF) and the Center for Civil Liberties (CCL) hosted a European Parliament breakfast under the title “Ukrainian Hostages of the Kremlin: How to Release Them All?”. The event was organised upon the initiative of the MEPs Petras Auštrevičius (Renew Europe; Lithuania), Viola von Cramon-Taubadel (Greens/EFA, Germany) and Julie Ward (S&D; UK).

We proudly welcomed Oleg Sentsov, Ukrainian filmmaker, 2018 EP Sakharov Prize Laureate and the most famous former political prisoner in Russia. Sentsov reminded he cannot discuss culture without mentioning the tragic events that are happening to the Ukrainian people in the occupied territories of Crimea and Donbas. This was echoed by the opening remarks by Antoine Arjakovsky, a historian at Collège des Bernardins who stated that teaching European history is crucial to stop Russia’s imperialism.

In an informal and friendly environment, MEPs Bernard Guetta and Michael Gahler and the co-host MEP Viola von Cramon-Taubadel discussed how to guarantee the territorial and political integrity of Ukraine and to ensure full access to media and international observers to the Russian-controlled territories of Ukraine.

Meanwhile, the co-host MEP Petras Auštrevičius urged his colleagues to join efforts to release all Ukrainian hostages of the Kremlin unconditionally, to test Ukrainian president Zelensky’s promises and not to compromise with Russia on freeing prisoners.

We are happy to have had with us MEPs Julie Ward, who has been advocating for artists at risk for many years, as well as Róża Thun and Magdalena Adamowicz, long-time supporters of human rights.

Ambassador of Ukraine to the EU Mykola Tochytskyi and our Lyudmyla Kozlovska delivered a strong message by reminding of the need to stop human rights abusers – like the leader of the Russia-backed separatists in Donetsk Denis Pushilin – from entering the EU and apply targeted sanctions against them. Oleksandra Romantsova of CCL stressed that 87 Ukrainian political prisoners are still imprisoned in Russia and in occupied Crimea, while 227 are kept as hostages in occupied Donbas.

In the closing remarks, ODF has strongly encouraged the EP to work together with civil society organisations from Ukraine, Russia and the EU to release all hostages of the Kremlin.