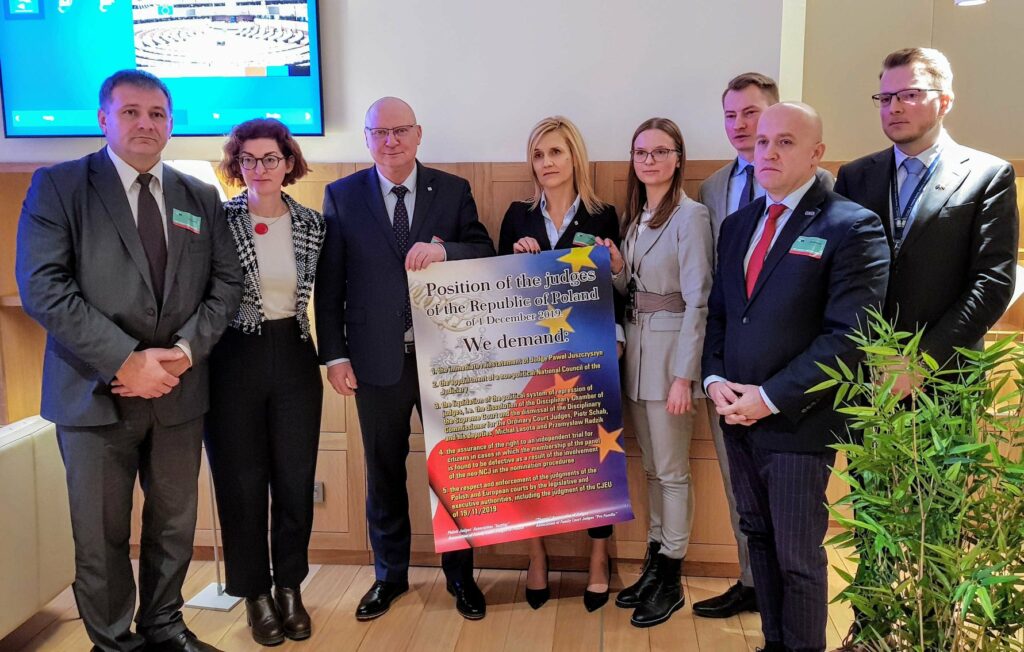 We are pleased to inform that on December 12, 2019, we organized a series of meetings involving “defiant” Polish judges and prosecutors – the main victims of politically motivated persecution. Among them were judges Waldemar Żurek and Dariusz Mazur as well as prosecutors Krzysztof Parchimowicz and Ewa Wrzosek.

The main event of the day was “Law and Justice’s Campaign against the Polish Judiciary” – a European Parliament lunch debate co-organised with Renew Europe, hosted by some of Poland’s best friends in the EP, Sophie in ‘t Veld & – as we’ve learned – Michal Šimečka, with crucial input from the uncompromising Róża Thun & our Lyudmyla Kozlovska.

We’re proud to say the room was packed as hardly ever seen at this type of events and media coverage was quite significant – from some 10 reports across state TV, through a thorough material in private Polsat, to a dozen publications across web portals (from independent like Gazeta Wyborcza & Dziennik to pro-government).

The whole event can be viewed on our fanpage on FB.

Recordings of the event are also available on our YouTube channel:

Directly following the debate we had a very pleasant discussion with the always-supportive Human Rights Watch. Then two high-level meetings, which one could expect to rather be a courtesy, but which turned out to be highly productive, with concrete next steps agreed upon: with European Commission Vice-President Věra Jourová & Justice Commissioner Didier Reynders. Among our main appeals to them was requesting interim measures from the ECJ regarding the repression faced by judges – something that we’re glad to say the Commission has just said would happen! As could be predicted though, soon after our meeting the right-wing and state media – including the main state TV news Wiadomości – accused the EC Vice-President, who had issued a letter in defence of the judiciary, of “seeking anarchy”, since she had met with “well-known radicals” from ODF.

Last but not least, to end the day we had an – unfortunately rushed – open meeting for experts, officials & friends, kindly hosted by the Amnesty International European Institutions Office.

Suffice to say we were met with a heart-warming, unexpected wave of support from the EU for some of the last-standing heroes of the independent judiciary in Poland. The prevailing message: “stay strong, we have your back!”.