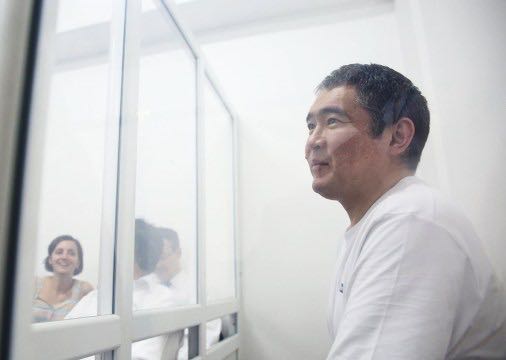 On December 30, 2019, we learned with great relief of the release of Kazakh political prisoner Iskander Yerimbetov. Unfortunately, as we have reported before, Iskander’s health is critical and, following months of torture, he requires immediate care. He also still faces the risk of re-imprisonment.

Nevertheless, international solidarity and the continued efforts of the family of Iskander who tirelessly campaigned with numerous human rights defenders and MPs for his release proved successful in the end. We are grateful for all the support we have received during these years.

Still, at least twenty other political prisoners remain in prison in a country where torture in detention facilities is a common practice. ODF has listed all of them in one of the reports concerning prosecuted persons in Kazakhstan.

Iskander Yerimbetov is a businessman and the brother of Bota Jardemalie, a prominent human rights defender and lawyer from Kazakhstan. Ms Jardemalie was granted political asylum in Belgium as she is prosecuted in her homeland due to her work concerning Mukhtar Ablyazov,  an opposition politician and leader of the “Democratic Choice of Kazakhstan” peaceful opposition movement, as well as victims of political persecution. In 2018, Yerimbetov was convicted to 7 years’ imprisonment under false charges of ‘fraud’ and subjected to torture.

Facts established by independent experts confirm that the authorities subjected Yerimbetov to criminal prosecution and torture in their attempts to force Jardemalie to return to Kazakhstan and “cooperate with the investigation bodies” in the case of Ablyazov. As a result of continuous inhuman treatment and beatings in the detention facility, Yerimbetov’s health deteriorated and up to the present he still suffers from the detrimental consequences of torture. These unprecedented violations from the side of Kazakh authorities confirm the political nature of the trial.

Yerimbetov’s case triggered harsh reactions among the international community. Fellow human rights NGOs as Norwegian Helsinki Committee and the Italian Federation for Human Rights immediately declared the political nature of the verdict and demanded the Kazakh authorities to stop Yerimbetov’s torture and urgently release him. Moreover, the subjectivity of his arrest and detention was highlighted by the UN Working Group on Arbitrary Detention in 2018, and the call for his release was supported by the European Parliament in its resolution on human rights situation in Kazakhstan dated 14 March 2019.

Additionally, 17 US Senators called on President Tokayev to investigate the torture allegations and take appropriate measures towards the ones responsible.