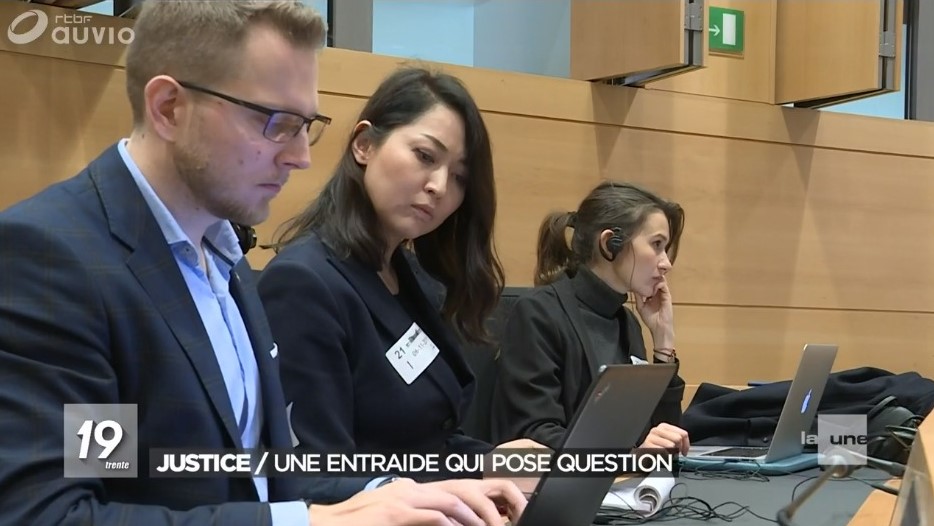 On 6 November 2019, Members of the Federal Parliament of
Belgium’s asked questions to the Minister of Justice Koen Geens, during a
Justice Committee hearing. Five parliamentarians, Georges Gilkinet
(Ecolo), Georges Dallemagne (cdH), Khalil Aouasti (PS), Sophie Rohonyi
(DéFI) and John Crombez (sp.a) asked questions regarding the
controversial judicial cooperation between Belgium and Kazakhstan in
conducting a raid of the apartment of Kazakh political refugee and human rights lawyer, Botagoz Jardemalie. ODF has been monitoring the case since the beginning and is now supporting lawmakers investigating it.

All
parliamentarians raised their serious concerns regarding the nature of
such judicial cooperation and questioned whether Belgium should have
accepted it or not. “Mrs Jardemalie has been the subject of a request
for judicial cooperation from Kazakhstan – a country from which the political refugee status, granted to her by Belgium in 2013, is supposed to protect her” started Georges Gilkinet.

“It seems that our judicial police services cooperated with the Kazakh police at the expense of this lawyer who had been granted political asylum precisely because of the serious threats that the Kazakh dictatorship poses to her security” added Georges Dallemagne.

“Belgium
has therefore acted upon a request for legal assistance from a country
recognized by an independent Belgian public authority, the Office of the
Commissioner General for Refugees and Stateless Persons (CGRA), as persecuting the person who was finally searched” stressed Khalil Aouasti. “What is worse (…) is that the search was conducted in the presence of two non-identified Kazakh policemen, who were able to access documents of the refugee, who is also a lawyer of the New York Bar. All of this took place in the absence of the President of the Brussels Bar,
who was informed of the search after it happened, while on the contrary
it is expected, although this lady is not a member of the Brussels Bar,
that he be warned and have the possibility to be present or delegate a
member of the Council of the Order to ensure compliance with the
principles governing the legal profession” he added, pointing out
another violation in the procedure of the search.

Referring to the materials seized during the search, Sophie Rohonyi insisted upon the risks “that if these documents, hard disks and computers are not returned, they will likely be used by the Kazakh courts against the lawyer but also against the political opponents that this lawyer represents”. “Was the confidential nature of the documents sufficiently represented by having the search carried out in this way? Was the President of the Bar asked for the presence of a member of the order so that the confidential nature of the documents could be protected? If not, why didn’t that happen?” asked John Crombez.

Moreover, concerns were raised by both Rohonyi and Dallemagne regarding the seizure of passwords and the hacking of accounts that followed:
“Since the submission of my question, I learned that some passwords
found during this search, including for mailboxes, Facebook, Instagram
and other social networks, have been used in the meantime to access Mrs
Jardemalie’s accounts. It is particularly serious to realize
that items that have been seized may have been used by third parties to
search the correspondence for information that they did not normally
have access to legally” underlined Dallemagne.

The
questions were answered by the Minister, but were very limited due to
the ongoing investigation, as he explained. His primary justification
for the cooperation was properly conducting the investigation.
Nevertheless, many elements in the reply provided remain problematic. In
particular:

1)    The Minister replied to the complaints about
the absence of the President of the Bar by saying that the decision to
notify him or not is taken by the examining magistrate (juge d‘instruction).
He added that two lawyers of Mrs Jardemalie reached the apartment while
the search was occurring and they made no objections. This statement
does not correspond to reality: the search continued for two hours
without the presence of a lawyer. When, around 8:30 am, Jardemalie’s
lawyers, Ronit Knaller and Antoine Matz, reached the apartment, the
police prevented them from entering it, claiming without basis that they
would interfere with the search, and refused to provide them with a
valid search warrant.

2)    The Minister justified the need for
cooperation on this case in order to not send a message of impunity.
Nevertheless, as pointed out by Khalil Aouasti during the debate, the
accusation brought against Mrs Jardemalie were already in place in 2013,
when she was given the status of political refugee by Belgium. The
Geneva convention on the status of refugee provides exception for the
granting of refuge under article 1F, which include as a criterion for
exclusion the commission of a serious crime in a country different from
the country of refuge prior to being admitted for refuge. The alleged
crime quoted by the Minister was committed prior to the arrival of the
person in 2013 on the territory. The Office of the Commissioner
General for Refugees and Stateless Persons (CGRS), in granting refugee
status to Mrs Jardemalie, examined this exclusion criterion. Despite
this, the CGRA, an independent authority, granted her the refugee status
in 2013.

3)    The Minister explained the presence of
two Kazakh officers (one judicial police and one from the
anti-corruption bureau, according to the Minister) during the search as
normal practice. However, it must be underlined that this led to
potential immediate violation of sensitive data which may have been
photographed and sent to Kazakhstan. Moreover, within hours of the
search, at least three of Jardemalie’s e-mail accounts and her iCloud
account were accessed by unauthorized persons, very likely the Kazakh
authorities, who obtained access to her accounts in the course of the
search. The e-mail accounts contained confidential and privileged
information.

4)    At no point during the search did the Belgian
police provide a search warrant, despite being asked for one by
Jardemalie’s family and the lawyers. The Minister did not address this
issue.

5)    The Minister claimed it was normal to conduct a
search of a political refugee’s home together with representatives of
the state the refugee is being protected from. He in fact stated that
this has happened many times, and several of these specifically with
Kazakhstan. Considering, that in this case Bota Jardemalie’s brother is a
political prisoner being tortured in Kazakhstan (as confirmed by the
UN, EP, OSCE and US Senate, among others), would it be normal –
according to the Minister – e.g. for the prosecutor responsible for
these atrocities, to be present at the search and have unrestricted
access to his sister’s documents, online accounts and belongings? Would
this also be the case for refugees from any other authoritarian regime,
or just from Kazakhstan? Doesn’t that go against the institution of
political asylum itself?

6)    The Minister avoided commenting on
the country that sent the request of mutual cooperation. As reminded by
Dallemagne, the accusations of corruption were made by a “regime,
infamous for corruption cases involving Belgian and French
personalities. Everyone here remembers the lamentable Kazakhgate
affair”. Despite this, the Minister only acknowledged that, certainly,
greater attention must be paid when mutual assistance requests are
received from “certain countries”, but did not seem to be concerned
about the possibility that this may indeed affect the reliability of the
nature of the request itself. It is difficult to believe that the
Minister would be unaware of Kazakhstan being considered an
authoritarian, non-democratic regime by international institutions, with
constant human rights violations, rampant corruption and lack of an
independent judiciary.

The
Open Dialogue Foundation has raised its concerns over this case with
the Members of the Belgian Parliament and has closely followed it, with
ODF Advocacy Officer Xheni Dani commenting on it for national RTBF news
following the proceedings. More background information on the
persecution of Bota Jardemalie, as well as her brother, political
prisoner Iskander Yerimbetov, can be found in our reports:

For further information on the parliamentary proceedings: