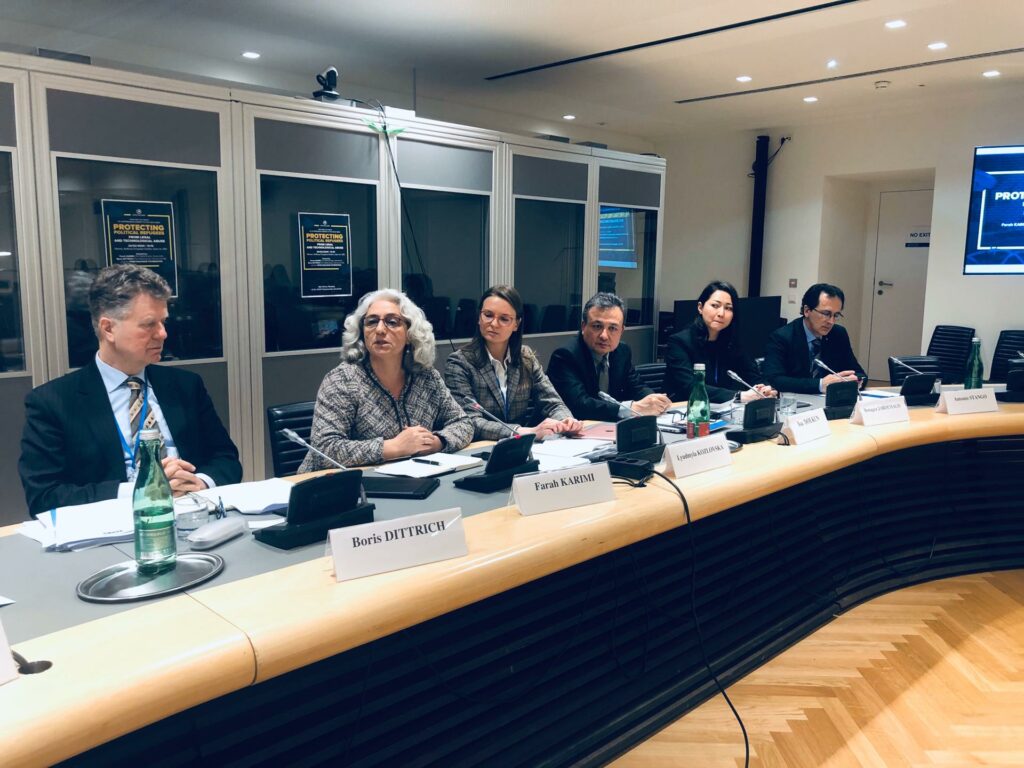 Our guest speakers who, in the majority, are themselves dissents from oppressive regimes, shared their experience and expertise on legal and technological abuse.

Isa Dolkun, president of the World Uyghur Congress, explained how China mastered Digital Authoritarianism using it to surveil, repress and manipulate their population as well as Uighurs who have fled the country. Dolkun affirmed that China consistently goes to impressive lengths to surveil exiled dissenters. Furthermore, he shared statistics which show that in the past 20 years, over 300 Uyghurs have been returned to China from over 16 countries. In the majority of cases, it was impossible to track what happened to them after the forceful repatriation.

Bota Jardemalie shared her testimony of how Kazakhstan is going to outrageous lengths to surveil its political refugees. She only realized that she hadn’t left the “surveillance state” behind when Kazakhstani agents were allowed to search her apartment in Belgium, despite her holding an asylum status there. ODF has advocated for her right to protection in Belgium.

Turkey presents yet another case of Digital Authoritarianism, described by our guest speaker C, an exiled Turkish lawyer. In particular, our guest explained how via a “profiling tool” the regime hunts its real and imaginary opponents. Most worrisomely, the arbitrariness of the software’s algorithm means it’s enough to have a distant cousin sympathizing with the Gülen Movement to be jailed, stated C.

In the case of Russia, the regime’s arm can reach even ordinary citizens. Daria El Zhed shared her story as one everyday civilian and a peaceful activist of Open Russia, who had to flee the country to seek asylum and is now placed on the Interpol wanted list.

Our last guest speaker, Antonio Stango from the Italian Federation of Human Rights, explained how disinformation campaigns became a part and parcel of Authoritarian States’ coercive toolkit, used to repress potential opposition at home but also exiled dissidents. He also identified how the Interpol has been abused by autocrats to pursue their opponents abroad via the issuance of Red Notices for specific individuals.

Later, at the OSCE PA Joint Session of the General Committees, our co-host of the side-event, Senator Karimi, explained the urgency of the issue of politically motivated abuse. She pointed out that the topic of misuse of extradition procedures and mutual legal assistance has been reviewed by OSCE PA several times in the past and it is present in the Luxembourg Declaration of 2019. However, the problem remains unsolved: “We called on these states to stop using Red Notice and Diffusion to harass political opponents, journalists members of civil society and businesspeople beyond their own borders” – said Karimi, who called for the implementation of OSCE declarations, especially at national parliaments.

During the two-day OSCE Parliamentary Assembly, members of our delegation also met with several delegate MPs, including President of the OSCE PA, George Tsereteli, and US Congressman Alcee L. Hastings.