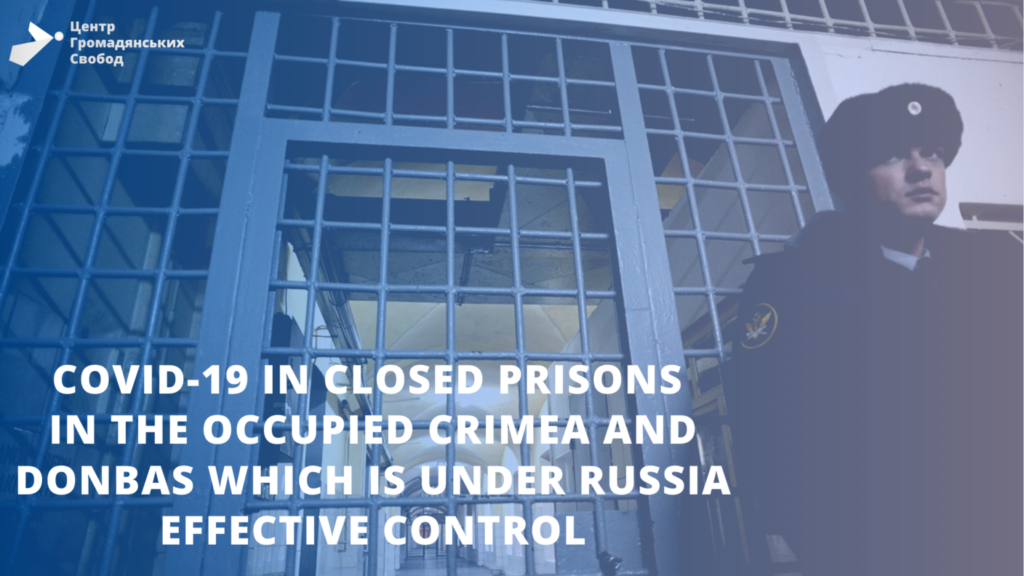 Statement on the COVID-19 in closed prisons in the occupied Crimea and Donbas which is under Russia’s effective control. An immediate response from international organizations is required.

We, the undersigned, appeal to the international organizations and their member states to prevent the coronavirus contagion in the detention facilities (prisons and pretrial detention centers) in Crimea which is temporarily occupied by the Russian Federation, in the Donbas which is under Russian effective control, and in the territory of the Russian Federation itself.

Situation in the Occupied Crimea and the Russian Federation

Since March 16, 2020, the Federal Penitentiary Service of the Russian Federation (FSIN) suspended all visits to detention facilities to prevent the spread of the disease among the suspects, those accused and convicted, as well as workers of the penal system.

At the same time, penitentiary administrations are unable to implement WHO recommendations against the spread of coronavirus. The health services of these institutions lack staff, medications, and equipment. They are not capable of coping with common widespread diseases, let alone a global health crisis.

Moreover, detention facilities present an extremely high risk for the transmission of infectious diseases. The buildings are often poorly ventilated, and the prison authorities cannot ensure adequate sanitation and hygiene conditions, i.e. sufficient access to water to wash hands. The detainees continue to be exposed to high risks daily during work, gatherings, showers, etc. The prison authorities conduct personal examinations of detainees and perform searches of cells on a daily basis, entering in body-to-body contacts with inmates. Masks for the people showing symptoms of respiratory diseases, both inmates and staff, are not available.

“On March 19, the ambulance requested in court that I should be taken to the hospital, but no one ever took me there. I was just taken to a small box in the courtroom. There, I was lying on the floor until 9 pm, because there was very little room on the bench, and I wanted to lie down, as I was cold and shivering. The schedule of the court hearings is very intense, we are on our feet for 12-14 hours without water and food. I returned to my cell close to 11 pm. I went to another paramedic, but he did not give me any medication besides the antibiotics. Since that day, I had a temperature of 39.3 C, and then it has even risen to 39.8 C. I have a very dry, unpleasant cough. The nose is stuffy. It is difficult to breathe. Three to four other people are also sick in the cell. They are also given aspirin and the same antibiotic. As of today [March 23], I do not know how high my temperature is. I wrote a statement asking for a doctor to listen to my lungs. But I was taken to a videoconference to participate in a court hearing, and I was never taken to see a doctor. I do not want to complain, but this is torture. In prison, a person simply does not have an opportunity to protect himself,” comments Server Mustafayev, a prisoner of conscience, the coordinator of the Crimean Solidarity.

The situation is considerably aggravated by the overcrowding of Russian prisons and detention centers, with inmates being kept in poor sanitary conditions and the transfer of prisoners from the occupied Crimea into the Russian Federation taking a long time in breach of the norms of international humanitarian law. Due to the prevalence of torture in Russian prisons, restricting the contact of prisoners with the outside world further increases the risk of ill-treatment, especially during crisis situations.

The situation in the Donbas effectively controlled by the Russian Federation

The situation in the Donbas which is under the effective control by the Russian Federation looks even worse. After 6 years of war, even the International Committee of the Red Cross has no access to detained people. In addition to the so-called official detention centers, there is an extensive network of secret detention facilities. One such place was mentioned in the latest report of the Office of the United Nations High Commissioner for Human Rights. It is called “Isolation”, located in the building of a former plant in Donetsk. The conditions of detention in both “official” and secret detention facilities can be equated to torture and ill-treatment and are inappropriate even for short term detentions.

“I was held in the 13th post of the Donetsk detention facility, considered one of the “best” ones when it came to the conditions for the prisoners. Cell conditions were appalling: poor sanitation, lots of bugs and cockroaches, I could not even use the mattress — it was all dirty and riddled with bed bugs — so I slept on the metal bunk, under which I put a blanket sent to me from home. Part of the window was broken, so the air in the room was constantly cold. In the 10th post, which is the worst one, the situation is extremely critical: there are rats, and the sewage often overflows into the cell. There is almost no space – cells barely fit two people, darkness, no daylight, since the post is located in the basement of the detention facility” – comments Donetsk journalist Stanislav Aseev, who was released during an exchange in December 2019.

The report of the Office of the United Nations High Commissioner for Human Rights highlights the widespread practice of torture and ill-treatment of detained persons. Recently released detainees reported beatings, including with electric shocker, strangulation (“wet” and “dry” methods), sexual abuse, torture, the removal of body parts (nails and teeth), deprivation of water, food, sleep, or access to the toilet, imitation of execution, threats of violence or death, and threats of harm to the family.

The quality of medical care in these institutions is described in testimonies provided to the OHCHR by several “Isolation” detainees. According to them, a medical worker was present during their interrogations and torture. He revived those who had lost consciousness and pointed out how to torture in order to inflict the greatest pain but not to cause death. He also examined the detainees before the torture began, asked about their illnesses, measured their blood pressure or checked their pulse, and made injections.

Even in those facilities where the detention of people is officially confirmed (as opposed to the situation with secret detention centers), the prisoners are provided with necessary medicine and goods by their relatives. For the quarantine period, restrictions were imposed on crossing the demarcation line in the Donbas. Today, those prisoners, whose relatives live in the territory controlled by Ukraine, will not be able to receive the necessary medicine and goods.

Therefore, there are no illusions that there will be any medical assistance in case of the spread of coronavirus in prisons and detention centers of Donbas which is currently under the effective Russian control. Moreover, the question arises as to what measures will be undertaken by the Russia-controlled illegal armed formations in charge of the territory to deter the spread of the coronavirus in prisons and detention centers, in the first place, to protect themselves from contracting the disease.

The aforementioned problems in the penitentiary institutions and detention centers in the Ukrainian territories occupied and controlled by Russia pose a real threat not only to prisoners and staff but also to the general population. And because, according to scientists, the pandemic can continue in waves, it can threaten the populations of other countries.

In view of the foregoing, and taking into account the position of the European Committee for the Prevention of Torture and Inhuman or Degrading Treatment or Punishment of March 20, 2020, we call for the urgent reaction of the international organizations, the United Nations, the Council of Europe, the European Union, the OSCE, and their member states to:

We also urge the Ukrainian authorities to comply with all the recommendations set out in the appeal of the European NGO’s regarding COVID-19 in the detention facilities, according to Ukraine’s international obligations to protect the life and health of persons who are under its effective control during the pandemic.