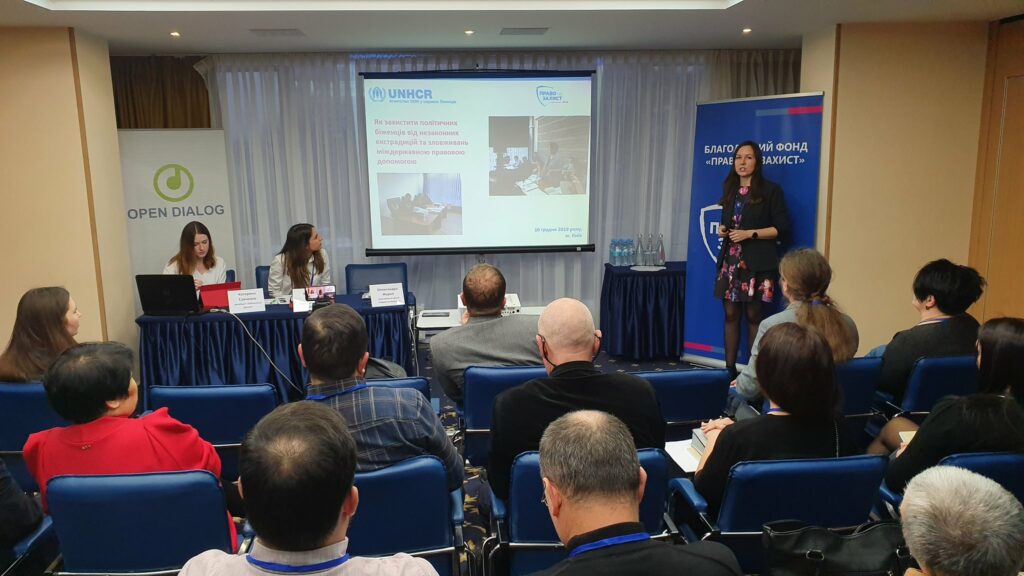 The protection of political refugees and illegal extraditions: debate in Kyiv

On 10 December 2019, in Kyiv, a discussion was held on the topic: “How to protect political refugees from illegal extraditions and misuse of interstate legal assistance?“. The event was held as part of the 4th National Human Rights Non-Conference. The Open Dialogue Foundation, the Right to Protection Charitable Foundation, the Kharkov Institute of Social Studies, and the Human Rights Agenda Coalition were among the organisers of the event.

More than 30 people took part in the discussion in a filled room. They included human rights activists, experts, lawyers, journalists, activists, as well as refugees and asylum seekers from Russia, Kazakhstan and Tajikistan. As regards the authorities, the event was attended only by an ombudsman office employee. Meanwhile, representatives of the General Prosecutor’s Office, the Ministry of Justice and the Migration Service did not respond to invitations.

The misuse of INTERPOL: launching an illegal extradition procedure

The event discussed the topic of how authoritarian states, hunting refugees and political opponents, misuse the mechanisms of INTERPOL, extradition and legal assistance in criminal cases. For more than six years, human rights defenders, the EU and PACE bodies have been working on this problem.

First, the experts identified cases in which international human rights agreements prohibit extradition: the case when prosecution has political overtones; the case when there is a threat of torture in an unfair trial; the case when a person with refugee status faces potential extradition to his homeland; and the case when an asylum seeker’s application is still being processed.

Kateryna Savchenko noted that the misuse of INTERPOL begins the illegal extradition procedure. Article 3 of the Constitution of INTERPOL prohibits the organisation from interfering in politically motivated cases. The expert reported the first results of a reform carried out by INTERPOL.

Subsequently, the speakers focused on the examples of abuses of extradition procedures and international legal assistance on the part of Ukraine. Thus, Ukraine renders assistance to authoritarian countries, such as: Russia, Turkey, Kazakhstan, Azerbaijan and Tajikistan in carrying out their politically motivated prosecution.

Prosecutorial bias of Ukrainian
prosecutors and courts in extradition cases

Attorney Dmitriy Morgun recalled that extradition in Ukraine is handled by two bodies: the General Prosecutor’s Office and the Ministry of Justice (the latter has the authority to extradite convicted persons). However, in practice, the Ministry of Justice passes relevant instructions to the General Prosecutor’s Office. At the same time, the lawyer emphasised that the unreformed prosecutor’s office is inclined to grant extradition requests.

“Within the framework of extradition procedures, the Ukrainian Prosecutor’s Office and the courts often ‘automatically’ issue decisions on arrest. At the same time, the Prosecutor’s Office is trying to justify its actions by citing the authority of INTERPOL. However, INTERPOL’s request is not a ‘warrant of arrest’. The state in whose territory the person was found decides independently on the measure of restraint and whether to extradite the person or not,” Kateryna Savchenko explained.

Extradition
arrest decisions are issued even when there is obvious evidence of fabrication
or political motivation of the charges. Attorney Dmitriy Morgun stated that, in
practice, the Ukrainian court verifies only compliance with formal requirements
for extradition requests.

Mikhail
Savva, the head of the civil society organisation “The Sova Expert Group”, who
has been granted refugee status in Ukraine, emphasised the need to consolidate
the political expertise tool at the legislative level. Thus, the migration
service and judges will need to attach this expert opinion to the case file and
take into account additional documentary information about the case or country
of origin.

Political masterminds behind
extradition cases and abduction of asylum seekers

Lawyer Morgun noted that the
movement of extradition documents is carried out through diplomatic channels,
and expressed the opinion that there is an element of political pressure in
every extradition case. “If there is a
political mastermind behind the case, the procedure is going to be carried out
regardless of any human rights obligations,” the lawyer emphasised.

As an example, he cited the cases of Alovsat Aliyev and Kemal Kutan. Ukraine tried to extradite them at the request of Azerbaijan and Turkey, respectively, although they had been granted refugee status in Germany. Kateryna Savchenko spoke about another similar case, namely, the case of journalist Fikrat Guseynov. He has been granted refugee status and citizenship in The Netherlands, but still found himself on the verge of extradition from Ukraine to Azerbaijan.

“The cases when asylum seekers are abducted or
extra-procedurally expelled from Ukraine, are egregious. This is carried out
secretly, without observing legal procedures, as a result of collaboration
between law enforcement agencies and special services of both states. This is
especially characteristic of the post-Soviet member states of the Minsk Convention
on Legal Assistance,” Kateryna Savchenko emphasised. In
particular, the cases of Aminat Babayeva, Vladimir Yegorov, Alexander
Frantskevich, Yusuf Inan and Salikh Zegi Igit have become well-known.

The expert of the Kharkov Institute of Social Studies, Andrey Chernousov, added that over the years, the long-lasting informal ties of members of the Minsk Convention have led to many violations. Frequently, human rights activists learn about the case only after the person has been illegally expelled. Experts also tackled the problems of the close collaboration between Ukraine and Russia. At the same time, Russia is carrying out military aggression and persecuting Ukrainian citizens through misuse of INTERPOL. Representative of the Ombudsman’s Office, Andrey Mamalyga recalled the case of his colleague, a participant in the military actions in the ATO zone, Igor Mazur. In November 2019, he was detained in Poland based on a request filed with INTERPOL by Russia, and he was successfully saved from extradition. Andrey Mamalyga expressed the opinion that it is necessary, within the framework of bilateral international contacts, to send warnings about mutual non-fulfilment of requests from states that systematically misuse INTERPOL.

Violations of the rights of asylum
seekers by the Migration Service

In addition, those gathered at the
event discussed an important aspect as to why, following their arrival in
Ukraine, political refugees are not relieved of their problems; instead, they
have to face new ones. Moreover, the problems begin as early as at the moment
of their arrival at Ukrainian airports.

Alexandra Zhurko, an attorney for
the Right to Protection Charity Foundation spoke about asylum seekers who are
detained in transit zones of Ukrainian airports without any decision by the
competent authorities. The Migration Service refuses to accept their asylum
application, after which they are expelled. The representative of the
Ombudsman’s office, Andrey Mamalyga, believes that persons detained at airports
should receive support from free legal aid centres.

According to Alexandra Zhurko, in
90% of cases, the Migration Service of Ukraine refuses to grant asylum or
additional protection. Subsequently, the asylum seeker has to go through a
lengthy appeal procedure in the courts, which may last as long as several
years. All this time, the person has with him only a certificate of having
contacted the Migration Service for protection; a document that does not even
prove his or her identity. “With this
document, a person cannot get a job, register children, get married, or open a
bank account; the person can do nothing but try to survive and hope that their
problem will be resolved sometime,” Alexandra Zhurko concluded.

When illustrating the groundlessness
of the decisions by the Migration Service, Kateryna Savchenko reported that
Russian activists who have been persecuted for supporting Euromaidan (Petr
Lyubchenkov, Sergey Anisiforov, Alexey Vetrov and Sergey Sakharchuk) had been
denied asylum. “The Ukrainian Migration
Service explained its decisions by the fact that, according to Russian law,
Russia is a ‘democratic state abiding by the rule of law’, where ‘no torture is
exerted”, Savchenko stated, expressing her surprise at the quoted
statement.

Alexandra Zhurko spoke in more
detail about another case, namely, the case of Zhanara Akhmetova, a journalist
and activist of the opposition movement “Democratic Choice of Kazakhstan”. The
Migration Service has twice denied her asylum, despite the fact that the
Ukrainian courts found these decisions ungrounded and demanded that they be
reconsidered. Zhurko noted that this problem is also characteristic of other
cases.

Zhanara Akhmetova spoke about Kazakhstan’s intelligence agencies, which are shadowing her in Ukraine, and suggested that the Migration Service may be providing intelligence bodies with information about her. The opposition activist from Tajikistan, Makhmadsobir Saygoziyev, spoke about Tajik special services, which threatened him and informed him that he would be denied asylum in Ukraine. Immediately after that, he found out that the Migration Service, indeed, did so.

Kateryna Savchenko listed several
recommendations of the Open Dialogue Foundation for the Ukrainian government
and other Council of Europe states, and also called on colleagues to jointly
promote them: