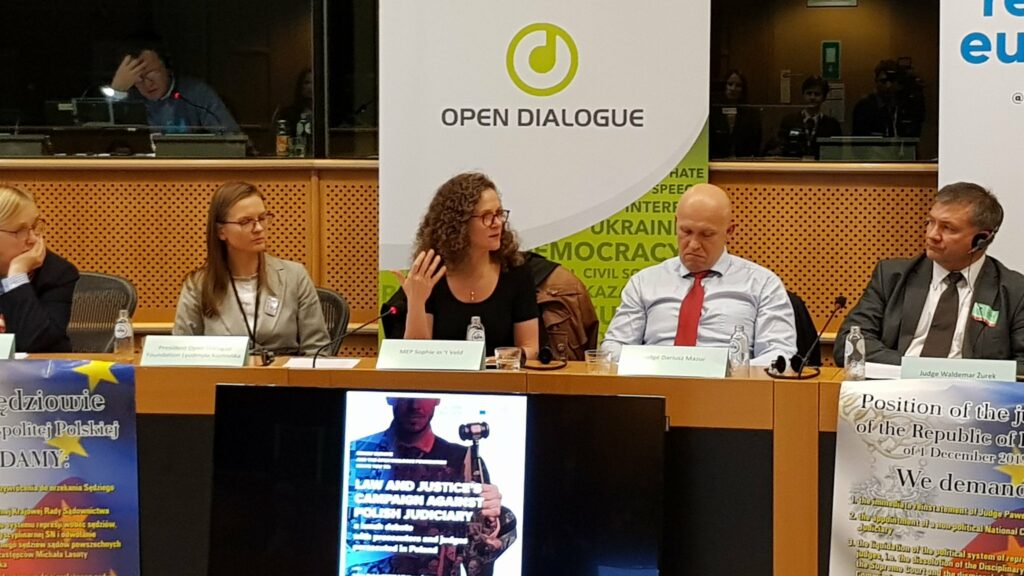 The event was co-organised by Sophie in ‘t Veld MEP (RE, Netherlands) and Michal Šimečka MEP (RE, Slovakia), and featured:

The event started with opening remarks by Michal Šimečka MEP (RE), who – despite being a first time MEP – already very well understands the gravity of the situation in Poland and laid it out for the guests.

It was followed by welcome remarks from Sophie in ‘t Veld MEP (RE), who is a leading defender of the rule of law and European values in the European Parliament and chairs the Civil Rights Committee’s Democracy, Rule of Law and Fundamental Rights Monitoring Group.

Last but not least, the participants were greeted by Lyudmyla Kozlovska, President of the Open Dialogue Foundation, who explained why this issue is so important for our foundation.

A more in-depth introduction to the rule of law crisis in Poland was then provided by well-known Polish EPP MEP Róża Thun.

The floor was then given to Judge Dariusz Mazur, spokesperson of the Themis Association of Judges, who gave a presentation on the Justice Ministry’s hijacking of the justice system and defamation campaign against disobedient judges.

Following judge Mazur, Judge Waldemar Żurek presented his own case, as he is often referred to as the most hated judge in Poland, as well as cases of his fellow judges from the Iustitia judges’ association.

Next, the topic shifted to the demolition of the institution of public prosecutor & repression against prosecutors, with a report presented by Prosecutors Ewa Wrzosek & Krzysztof Parchimowicz of the Lex Super Omnia association.

The opening statements were followed by a vivid discussion, starting with very kind words from Greens MEP Tinneke Strik, who congratulated the judges for their courage.

The whole Q&A session can be viewed on our YouTube channel.

Among our favourite fragments we have to thank the wonderful Róża Thun MEP for her kind words about ODF:

“The Open Dialogue Foundation reaches much further than the European Union, they’re active in Eastern Europe outside of the EU, in Central Asia and everywhere where people are being harassed for their political involvement and human rights are being broken. We have here Mr Kramek and Lyudmyla Kozlovska, and her story also is worth a book, and it’s not finished. I wish you a lot of courage, thank you very much for organising this, but you know what is characteristic, what’s going in in my beloved homeland – with ODF people from today’s government, Mrs Kempa, Mr Jaki, Saryusz-Wolski, Czarnecki etc, cooperated as far as I know, very well, with the Open Dialogue Foundation, up to the moment when the Foundation started criticising breaches of law in Poland, and then they underwent an incredible attack from the side of public media (which aren’t public any more) and from the side of the government. But you don’t give up, and please do not give up, continue your involvement, not only for Poland, it’s the whole Europe and further than that”,

but the most relevant quote to the current situation in Poland, has to go to Sophie in ’t Veld:

It’s a sad takeaway from the debate, but unfortunately it is true what many experts are warning us about, that if the Polish government keeps excluding the country from the EU’s legal order it simply means that Poland is heading towards a Polexit. We must therefore do all we can to support the courageous judges and prosecutors who are often risking their careers to stop that from happening.

Following the event, several of the participants and speakers commented on the importance of the debate. Among the most noteworthy was Michal Šimečka MEP, who highlighted the courage of the judges and prosecutors:

Another speaker, Róża Thun MEP, quoted our guests judge Waldemar Żurek and prosecutor Krzysztof Parchimowicz, noting the persecution they face for performing their duties, including the quite shocking revelation that members of the prosecutors’ association, Lex Super Omnia, have been under surveillance since the association’s founding.

The entire debate as well as other selected fragments can be viewed on our Youtube channel.