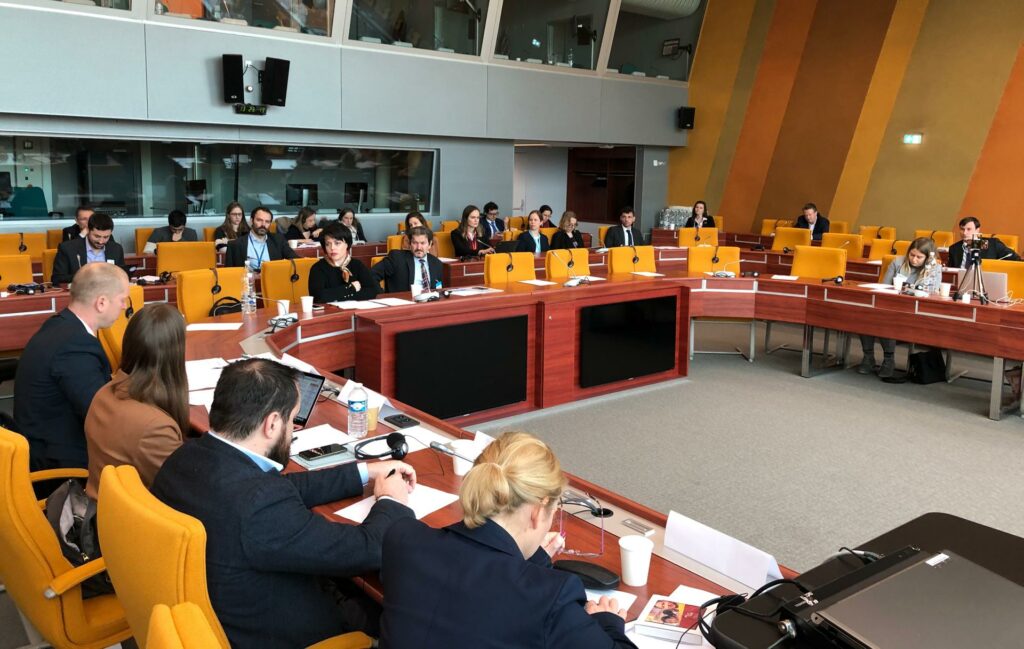 Functioning of democratic institutions in Poland: ODF fights for a resolute PACE report

As is by now tradition for us, we were proud to be present during the 2020 Winter Session of the Parliamentary Assembly of the Council of Europe, held on 27-31 January 2020 in Strasbourg, France. Our delegation consisted of ODF President Lyudmyla Kozlovska, Kazakhstani activist from the ‘Qaharman’ human rights movement Dana Zhanay and Polish persecuted judge Dominik Czeszkiewicz from the Suwałki District Court, member of the Themis Association of Judges.

Together with Dominik Czeszkiewicz, the very first Polish judge to be persecuted by PiS, we gathered support from PACE MPs to amend the report on “The functioning of democratic institutions in Poland”, which eventually led to the opening of the monitoring procedure with respect to Poland. During a heated debate, the Assembly adopted 6 amendments proposed by ODF and tabled by PACE MPs from different political factions and countries before the Plenary.

Below an overview of the most important amendments promoted by ODF and adopted by the Assembly:

11. The Assembly deplores the abuse of disciplinary proceedings against judges and prosecutors in Poland. It reiterates its concern that the political control of the Minister of Justice over the initiation and conduct of these proceedings does not provide the required safeguard against their abuse. The very high number of investigations opened against judges and prosecutors, on subjective grounds, which are subsequently neither formally ended nor result in the start of formal proceedings, deprive the judges and prosecutors concerned of their right to defence and have a chilling effect on the judiciary. This therefore undermines its independence. The credible reports that disciplinary investigations have been opened against judges and prosecutors solely for being critical of the justice reforms, and the fact that disciplinary investigations have been opened against judges as a result of decisions they have taken when adjudicating cases in their courts, needs to be condemned. In this context, the credible reports that a politically motivated smear campaign was organised against members of the judiciary by, and with the involvement of, high ranking officials in the Ministry of Justice and National Council of the Judiciary, are both deplorable and concerning; this undermines both the independence of, and the public trust in, the judiciary. The organisation of these smear campaigns needs to be fully investigated and those responsible identified. It is clear that an investigation by the prosecution service under direct control of the Minister of Justice, which is also a potential party to the investigation, would lack the required independence and credibility. The Assembly therefore calls upon the Polish authorities to establish, at the earliest opportunity, but no later than 31 March 2020, an independent public inquiry into these smear campaigns and those responsible for them.

17. The legal reforms and their detrimental effects on the rule of law in Poland have an overall negative effect on the effective functioning of democratic institutions in Poland. Regrettably, there are no indications that this issue will soon be resolved. The Assembly therefore resolves to continue to closely follow the developments with regard to the functioning of democratic institutions and the rule of law in Poland. The Assembly therefore decides to open the monitoring procedure in the respect of Poland until the above-mentioned concerns are addressed in a satisfactory manner.

7.4. the reform of the Supreme Court, the Assembly deplores the attempts to force a considerable number of Supreme Court judges into early retirement, in violation of European standards. The Assembly therefore expresses its satisfaction that these judges were reinstated following the judgment by the Court of Justice of the European Union. The introduction of the possibility of a so-called extraordinary appeal, on wide-ranging and subjective grounds, against judgments that have already been finalised and whose appeals process has been terminated in accordance with the law, is of serious concern as it violates the principles of legal certainty and res judicata. The Assembly is concerned that the introduction of the extraordinary appeal could considerably increase the number of applications against Poland before the European Court of Human Rights. The composition and manner of appointment of the members of the disciplinary and extraordinary appeals chambers of the Supreme Court, which include lay members, in combination with the extensive powers of these two chambers and the fact that their members were elected by the new National Council of the Judiciary, raise questions about their independence and their vulnerability to politicisation and abuse. This needs to be addressed urgently.

8. The Assembly takes note of the ruling by the Polish Supreme Court of 5 December 2019, issued on the basis of the guidelines contained in the judgment of the Court of Justice of the European Union of 19 November 2019, that the National Council of the Judiciary cannot be considered an impartial and independent body, and that the new disciplinary chamber of the Supreme Court cannot be considered to be a court within the meaning of European and Polish law. The Assembly also takes note of the Supreme Court’s resolution of 23 January 2020, which states that any judges appointed by the National Council of the Judiciary are not authorised to adjudicate. The Assembly is deeply concerned by the Polish Government’s reaction to the resolution, which it considers to be unlawful. It calls upon the Polish authorities to fully abide by the judgment and resolution and to address without further delay these fundamental shortcomings in the Polish legal system.

During the side-event “Law and Justice’s Continued Campaign against the Polish Judiciary”, which took place on January 28, 2020, and hosted by Italian Senator Roberto Rampi with the participation of MP Barbara Nowacka, judge Czeszkiewicz opened the panel explaining the urgency of protecting the independence of the judiciary in Poland:

“My name is Dominik Czeszkiewicz and I am a judge in the district court in Suwałki, a small town in north-eastern Poland. I’m 40 years old (which is important and what I will talk about next). I have always thought that, as Alexis de Tocqueville claimed, “a good judge is a judge who does not want to be promoted.” The current reform of the justice system shows that in Poland we have several dozen judges who are judges only in order to be promoted – which means they do not deserve to be judges. I will come back to this point at the end.

For the past four years, we have been witnessing the so-called ‘great reform’ of the justice system in Poland, which includes hundreds of amendments to acts of law, including basic laws, such as the Act on the Organization of Ordinary Courts, the Act on the National Council of the Judiciary as well as an entirely new Act on the Supreme Court. In this landmark period for the justice system, it is worth asking whether the objective of implementing the ‘great reform of the justice system’ is – as representatives of the executive authority say – to contribute to an increase in the independence of the courts, expedite court proceedings, ensure the effectiveness of disciplinary proceedings against judges, de-communize the courts and remove corruption, which is allegedly common among the Polish judiciary. Unfortunately, the answer to these questions is unequivocally negative”.

Among the key messages we delivered to the MPs during bilateral meetings and at the side-event “Law and Justice’s Continued Campaign against the Polish Judiciary”, hosted by Italian Senator Roberto Rampi with the participation of MP Barbara Nowacka and judge Czeszkiewicz, were:

The side-event was live-streamed and you can watch it on our Facebook fanpage.