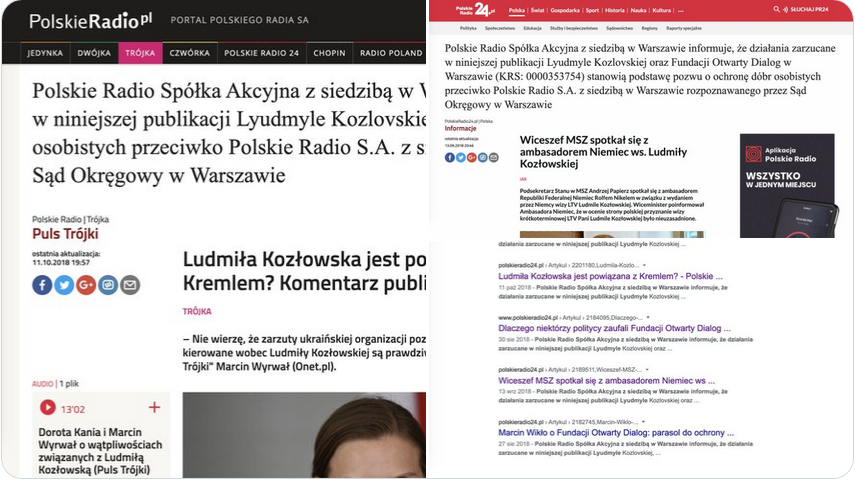 Due to the decision issued by the District Court in Warsaw on March 13, 2020, state broadcaster Polskie Radio S.A. secured a claim on personal rights protection of ODF, Lyudmyla Kozlovska and Bartosz Kramek. As a result, Polskie Radio updated multiple articles in three language versions (Polish, Russian and Ukrainian) with information regarding pending lawsuits, which we had filed to defend our good name.

This is the second court decision regarding the interim measures of personal rights  protection we have received due to the lawsuits filed by us against politicians representing the Law and Justice party and the media machine supporting them. Earlier, we have extensively reported about more than 20 lawsuits at a press conference in Warsaw on 10 October 2019.

On 25 September the District Court in Warsaw found sufficient prima facie evidence to secure the Foundation’s claims by obligating TVP to publish nearly 40 announcements on its website to notify the audience of the proceedings which had been instituted against it. Hence, TVP is forced to question the reliability of its own coverage of any issues related to ODF. To reach such a decision, the Court took into consideration numerous infringements of the personal interest of the Open Dialogue Foundation including, among others, ‘manipulations’, ‘obscure allegations’, ‘lack of specific evidence’, ‘inaccuracies’, ‘assessment of facts having nothing to do with reality’, and ‘completely biased opinions’.

For the time being, TVP’s appeal is pending. Despite the requirement of immediate enforceability (regardless of the appeal), TVP has not yet fulfilled its obligation. Therefore, we will be taking legal measures against it.

The conflict between Law and Justice and the Open Dialogue Foundation was ignited in July 2017 following ODF activist Bartosz Kramek‘s statement on civil disobedience in response to attempted violations of the independence of the judiciary in Poland.