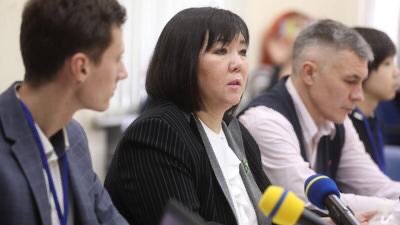 On May 14, 2020, the Supreme Court of Ukraine, acting as a last instance court, reversed the decision of the previous instance and declined to grant asylum to a prominent Kazakhstani journalist and oppositionist, Zhanara Akhmetova. The hearing was held without the presence of Akhmetova’s attorney. Akhmetova can be extradited to Kazakhstan anytime. If extradited, she faces torture and unfair trial. With all avenues for appeal having been formally exhausted, it is only the international community that can block the unlawful expulsion.

Zhanara Akhmetova is a journalist, a program director of the Kazakhstani opposition TV channel “16/12” and one of the leaders of the country’s biggest opposition movement, “Democratic Choice of Kazakhstan” (DCK). Fearing prosecution, she fled Kazakhstan and applied for asylum for her and her 12-year old son in Ukraine.

Her legal battle stretches back to 2017 and involves interventions on her behalf by numerous dissidents and stakeholders, including the head of the U.S. Helsinki Commission. Despite the support of the international community and human rights organisations, and the facts indicating she will be prosecuted in Kazakhstan, the Migration Service and the Supreme Court have refused to acknowledge the political context of her prosecution. What seems to constitute yet another breach of due process is the fact that the last hearing took place without her participation or the participation of her lawyers. Akhmetova learned about the decision today, on May 19, 2020, i.e. five days after the ruling was made.

Since all avenues for appeal have been exhausted, Akhmetova can be extradited anytime. In fact, according to our sources, the Prosecutor General’s Office is already preparing her extradition. Akhmetova’s lawyers will attempt to block it by appealing to the European Court of Human Rights (ECHR; under Rule 39). Hence, it is of crucial importance now for the international community to exert pressure on the Ukrainian authorities. In the past, numerous prominent officials and human rights organisations spoke in her defense, including the head of the U.S. Helsinki Commission, Members of the European Parliament [1] [2] and the Italian Parliament, Reporters Without Borders, the Italian Federation for Human Rights, Ukrainian Helsinki Human Rights Union, the Kharkiv Human Rights Protection Group, Kharkiv Institute for Social Research, Human Rights Centre ZMINA, Center for Civil Liberties, and Open Dialogue Foundation.