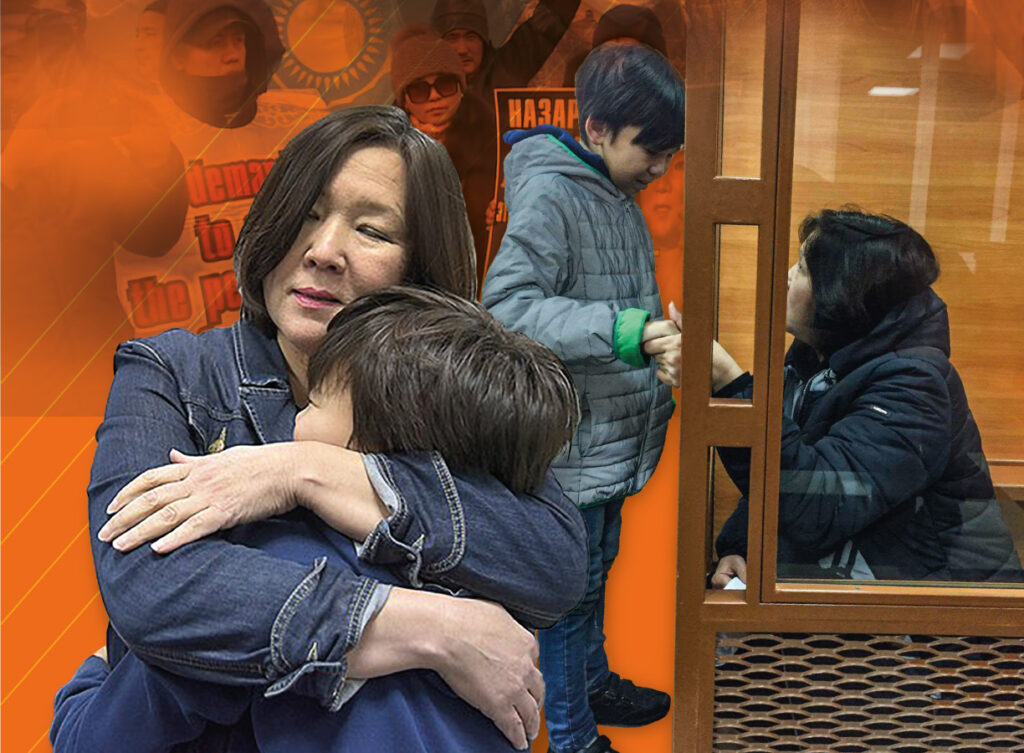 The Case of Zhanara Akhmetova: Ukraine Is in Haste to Arrest and to Extradite Kazakhstani Journalist

A prominent Kazakhstani journalist and opposition activist Zhanara Akhmetova could be illegally extradited from Ukraine to Kazakhstan at any time. According to our sources, the Prosecutor General’s Office of Ukraine is already preparing to place her under extradition arrest. On 19 May 2020, Akhmetova got a decision by the Supreme Court of Ukraine depriving her of the chance to be granted asylum. The decision was adopted in haste during the quarantine. It was also adopted without taking into account the arguments of Akhmetova’s lawyers.

A few days before, a new extradition treaty between Ukraine and Kazakhstan was ratified. Several disturbing facts point to the political order and extra-procedural cooperation of Ukrainian law enforcement agencies and Kazakhstani special services in this matter.

The U.S. Helsinki Commission, human rights organisations, Members of the European Parliament and the United Nations Special Rapporteurs recognize the political context of Akhmetova’s persecution and the inadmissibility of her extradition. The UNHCR Office in Ukraine calls for protecting Akhmetova from forcible return to Kazakhstan. However, the new Ukrainian authorities are one step away from ignoring their international human rights commitments for the sake of the dictatorial Kazakhstani regime, Russia’s closest ally.

Zhanara Akhmetova is a program director of the Kazakhstani opposition media “16/12” and one of the leaders of the opposition movement “Democratic Choice of Kazakhstan” (DCK). Kazakhstan is seeking her extradition from Ukraine, persecuting her for opposition and journalistic activities.

For three years, Akhmetova has been litigating with the Migration Service, seeking refugee status.

On 16 April 2020, the Supreme Court considered the complaint of the Migration Service – the cassation proceeding was opened. The court notified Akhmetova’s attorneys about the possibility of replying to the complaint of the Migration Service “within 10 days from the day of delivery of a copy of this decision with the extension of the period of time for quarantine” due to the Covid-19 pandemic. Her lawyers asked to participate in the hearing and were planning to reply within the time period set by the court.

The events may indicate an interest in starting the extradition procedure as soon as possible.

The decision of the Supreme Court was adopted 15 days after the Ukrainian parliament had ratified new treaties on extradition and legal assistance in criminal matters with Kazakhstan. In addition, on 15 April 2020, a meeting was held between the President of Ukraine and the Ambassador of Kazakhstan, where they discussed the intensification of bilateral relations.

Several facts which indicate the active involvement of Kazakhstani special services in this case are also concerning.

3. Why does Akhmetova deserve asylum: a refutation of the arguments of the Migration Service

In official documents and during court hearings, the Migration Service provided arguments trying to justify the denial of asylum. However, these arguments are refuted by objective, confirmed facts. On 31 July 2018 and 25 February 2020, the courts referred to some of these facts pointing to the illegality of the denial of asylum.

A) Economic charges for extradition

The Migration Service believes that Akhmetova “is trying to avoid criminal liability” while being prosecuted “on the basis of non-political fraud charges”. Nevertheless, they ignore the arguments of human rights defenders and the international community that the economic case is just an instrument for political persecution.

Kazakhstan put Akhmetova on the wanted list in connection with the ‘fraud’ case (not returning the debt) in the period between 2005-2008. In this case, in 2009, a Kazakhstani court sentenced Akhmetova to seven years’ imprisonment. The execution of the court sentence was delayed until her child reaches the age of 14 (i.e. until 2021).

Akhmetova began to actively engage in journalism and opposition activities, after which the Kazakhstani authorities began to put pressure on her. Akhmetova was subjected to administrative fines three times for “posting an appeal for an unsanctioned rally on Facebook”. On this basis, in 2017, the Kazakhstani authorities canceled the deferral of execution of the “fraud” case. The true motive for such a decision is political. The Ukrainian court also drew attention to it in the decision of 31 July 2018.

Kazakhstan demands extradition of Akhmetova due to “not returning the debt”, despite the fact that she repaid all civil claims. In 2016, an amnesty was declared in Kazakhstan, according to which Akhmetova should have been released from serving her sentence.

B) Activities in the opposition movement DCK

The Migration Service stated that “there is no information about Akhmetova’s participation in the opposition DCK movement,” and supposed that Akhmetova “creates the image of an oppositionist”. However, this is an outright lie.  In the indictments, Akhmetova is labelled the “leader of the banned DCK movement”. Statements by the General Prosecutor’s Office of Kazakhstan state that Akhmetova “is spreading the propaganda of DCK’s ideas”.

On 13 March 2018, at the request of the Prosecutor’s Office, the Kazakhstani court labelled the DCK as an “extremist” organisation. The court stated that the DCK “incites social discord” and “forms a negative image of authorities”. Nevertheless, on 14 March 2019, the European Parliament adopted a resolution on human rights in Kazakhstan, in which it noted the peaceful nature of the DCK’s activities.

In 2018-2020, based on the decision to ban the DCK, unprecedented arbitrary detentions of peaceful rally participants took place in Kazakhstan. During this period, more than 6500 people were detained, and more than 40 people were criminally prosecuted.

“Reposts from the Facebook page of Zhanara Akhmetova became the basis for the criminal prosecution of several activists in Kazakhstan. This gives grounds to believe that a new criminal case has been initiated against Akhmetova on charges of ‘organising the activities of the extremist organisation’”, Ukrainian Helsinki Human Rights Union and other human rights organisations noted. In Kazakhstan, several opposition activists were detained for publicly supporting Akhmetova. The police threatened them with criminal prosecution.

PACE [1], [2], UN bodies [1], [2] and members of the European Parliament drew attention to the massive political persecutions in Kazakhstan due to the ban on the DCK.

C) The threat of torture and unfair trial in Kazakhstan

The conclusion of the Migration Service about the “absence of objective facts that would indicate the use of torture” in Kazakhstan is particularly blatant. This suggests that either information about the country of origin has not been analyzed at all, or obvious facts have been deliberately ignored.

Torture in Kazakhstan and impunity for its use are systemic. Annually, the NGO Coalition Against Torture registers approximately 200 incidents of torture in penitentiary institutions in Kazakhstan. In October 2019, human rights defenders cited data according to which one person dies as a result of suicide, torture or tuberculosis every day and a half in Kazakhstani places of detention. The UN Human Rights Council notes that Kazakhstan still does not have an effective mechanism for investigating torture, and most cases are closed.

The Migration Service completely turned a blind eye to events suggesting that if extradited to Kazakhstan, Akhmetova would face not only torture, but also death.

In addition, over the past 7 years, the US State Department in its annual reports [1], [2] has emphasized the lack of a fair trial in Kazakhstan, especially in politically motivated cases. However, the Migration Service did not take this into account.

The Migration Service has demonstrated a selective approach to working with information sources. This body refers primarily to dubious blog posts that have clear signs of being ordered and violating journalistic standards. These publications are actively disseminated by Kazakhstani propaganda.

The Migration Service and the Supreme Court ignored the conclusions of human rights defenders and representatives of international organisations which noted the political nature of the persecution of Akhmetova, as well as the inadmissibility of her extradition. In particular, it was announced by:

4. The Prosecutor General’s Office is preparing the decision on extradition

Since the last appellate instance has issued a decision denying asylum, Kazakhstan’s extradition request is expected to be recommenced soon. Many years’ practice confirms that in extradition cases the unreformed Prosecutor General’s Office of Ukraine acts with accusatory bias, and the courts often “automatically” grant requests for extradition arrest.

According to our sources, in the next few days, the Prosecutor General’s Office is going to prepare the decision on extradition and to request a change of the preventive measure on extradition arrest. Akhmetova can be extradited to Kazakhstan anytime.

There is a high risk that Akhmetova may be expelled without the possibility of appealing the decision on extradition. For example, in November 2017, the prosecutor’s office had requested the extradition arrest of Akhmetova before she received the decision denying her asylum. At that time, thanks to the quick reaction of Ukrainian and international community, it was possible to stop the illegal extradition.

Extra-procedural expulsion (in fact – forced abduction) is a common practice in Ukraine. Over the past few years, such sad examples have included the cases of Aminat Babayeva, Vladimir Yegorov (both sent to Russia), and Alexander Frantskevich (sent to Belarus) who were expelled from Ukraine with the cooperation of special services.

On 20 May 2020, Zhanara Akhmetova sent a renewed application for asylum to the Migration Service, demanding consideration of the case under the new circumstances. In particular, Akhmetova points to the increasing mass repression and political assassination of DCK activists in Kazakhstan.

Extradition is not possible while the asylum application is underway. Akhmetova’s lawyers will attempt to block the extradition by appealing to the European Court of Human Rights (under Rule 39).

We appeal to the President of Ukraine, the Prosecutor General of Ukraine, the Minister of Internal Affairs, the Minister of Justice, the Minister of Foreign Affairs and the Head of the Migration Service so that the new authorities pass the test of noncooperation with dictatorial regimes. Kazakhstan is not just an authoritarian state, but the closest ally of Russia, which “accepted Russia’s decision” regarding the accession of the Crimea “with understanding”. A new President Kasym-Zhomart Tokayev (Nazarbayev’s protégé) is of the same opinion.

In this case, the Ukrainian authorities are not just going to exchange human fate for benefits in bilateral relations between states. Akhmetova’s extradition will be primarily an indicator of how the new authorities are adhering to international human rights obligations. In addition, signs of corrupt cooperation with the Kazakhstani authorities in the context of the persecution of an opposition journalist discredit Ukraine’s image as a country undergoing law enforcement and justice reform.

We urge that the extradition of Zhanara Akhmetova be stopped immediately, that she be provided with protection, as well as that the facts pointing to extra-procedural cooperation between the Migration Service and the Security Service of Ukraine with the Kazakhstani authorities in this case be investigated.