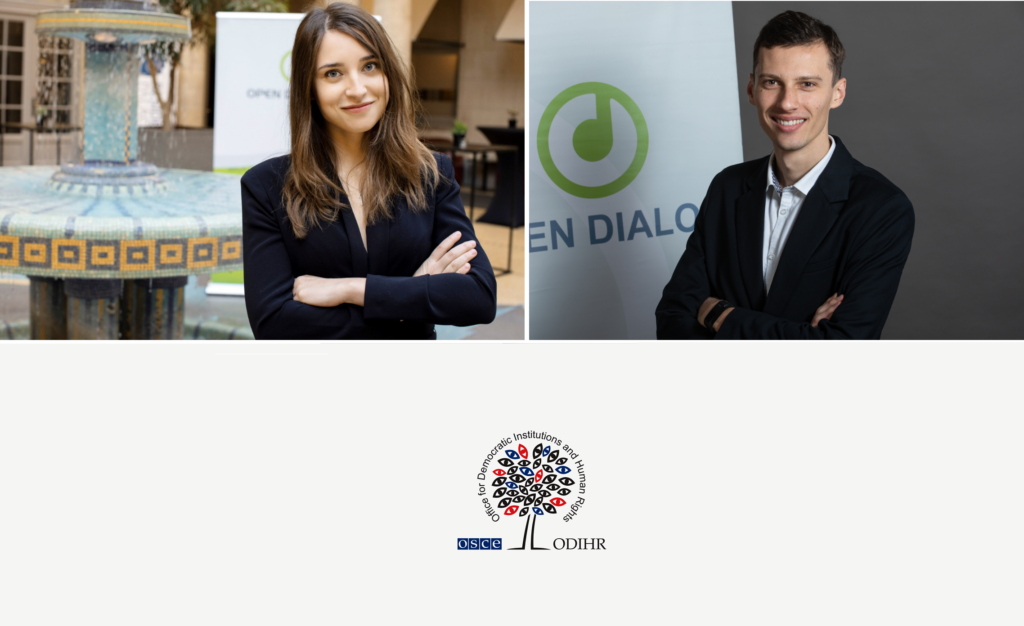 On May 25-26th, our Maksym Sytnikov and Katarzyna Szczypska, addressed the issues of ethnic tensions and ethnic discrimination in Kazakhstan and state-sponsored hatred by the public media in Poland at the Supplementary Human Dimension Meeting (SHDM).

SHDM is a platform for the OSCE participating States and civil society to discuss progress made by the former in implementing OSCE commitments. The latest meeting – that for the first time in the organisation’s history was held virtually due to the COVID-19 constraints – was devoted to addressing all forms of intolerance and discrimination. Taking the opportunity, the representatives of the Open Dialogue Foundation, Maksym Sytnikov and Katarzyna Szczypska, issued statements on the challenges and recent forms of discrimination in Kazakhstan and Poland, respectively.

In particular, Maksym Sytnikov raised the alarm about the conduct of the Kazakhstani authorities towards ethnic minorities, illustrating on a few examples that Kazakhstan priding itself on tolerance reeks of hypocrisy. Most alarmingly, in February 2020, an outbreak of violence in southern Kazakhstan saw members of a local Muslim ethnic minority of Chinese origin come under attack. Eleven people were killed, dozens were wounded and thousands fled to neighboring Kyrgyzstan as clashes broke out between ethnic Kazakhs and members of Kazakhstan’s Dungan community. The police and the security services did not prevent the pogrom from happening. As Sytnikov pointed out “it is hard to believe that the Committee of National Security did not notice 1000 armed people in the country where every citizen’s step is registered by Hikvision cameras”. Furthermore, the investigation that followed lacked transparency. The authorities forced local people to keep quiet and extracted confessions from Dungans through torture. They also refuse to recognize the incident as an ethnic conflict, presenting it as merely criminal.

Sytnikov also mentioned the situation of Uyghurs and ethnic Kazakhs from the Xinjiang Uyghur Autonomous Region of China. The Kazakhstani authorities deny asylum to inmates of the Chinese internment camps, as well as initiate criminal cases for “illegal crossing of the border” against Uyghurs and send them back to China, where they face human rights violations.

“The provided examples blow a huge hole in Kazakhstan’s official narrative of tolerance”, Sytnikov concluded and urged the authorities to stop the persecution of Dungans, Uyghurs and ethnic Kazakhs from China, and for the OSCE to react.

At a different working session of the SHDM, Katarzyna Szczypska examined the discriminatory practices that creeped into the Polish public media in the times of the pandemic. In particular, Szczypska showed how the public broadcaster incites prejudice and discrimination against migrants. For instance, on April 2nd, “Wiadomości”, the main news programme of Poland’s national broadcaster, TVP1, showed a material in which it accused refugees in camps in Greece of spreading the coronavirus. The material was a response to the EU Court of Justice ruling that Poland, Hungary and the Czech Republic broke the law by not complying with the EU relocation mechanism. In the TVP material, full of manipulation, the judgment of the CJEU was utilised to present refugees as an epidemiological threat and also to once again link them to the “Muslim terrorists” responsible for the attacks in Europe (since 2015 this has been a recurring motif in state media). The material failed to mention, however, the high risk of an epidemic outbreak in overcrowded and poorly equipped refugee camps.

Szczypska also reminded about the August 2020 review conducted by the UN Committee on the Elimination of Racial Discrimination, assesing the Polish authorities’ actions aimed at fulfilling the country’s obligations under the Convention on the Elimination of All Forms of Racial Discrimination. One of the key recommendations, highly unusual for the Committee, was for public figures to take clear positions on hate speech. It further asked the Polish delegation to provide specific examples of statements by officials opposing the use of hate speech in public debate. Despite the assurances that counteracting prejudice is important to the government, the delegation could not point to such statements.

Yet, the situation is worse still, as Szczypska highlighted: “we currently see worrisome incidents of state-sponsored hatred with the use of the government-controlled public media”. She added that “the pandemic was utilized to reiterate previously prevalent anti-immigrant rhetoric” and argued that this provides yet another justification for the urgent need to depoliticise the Polish public media.