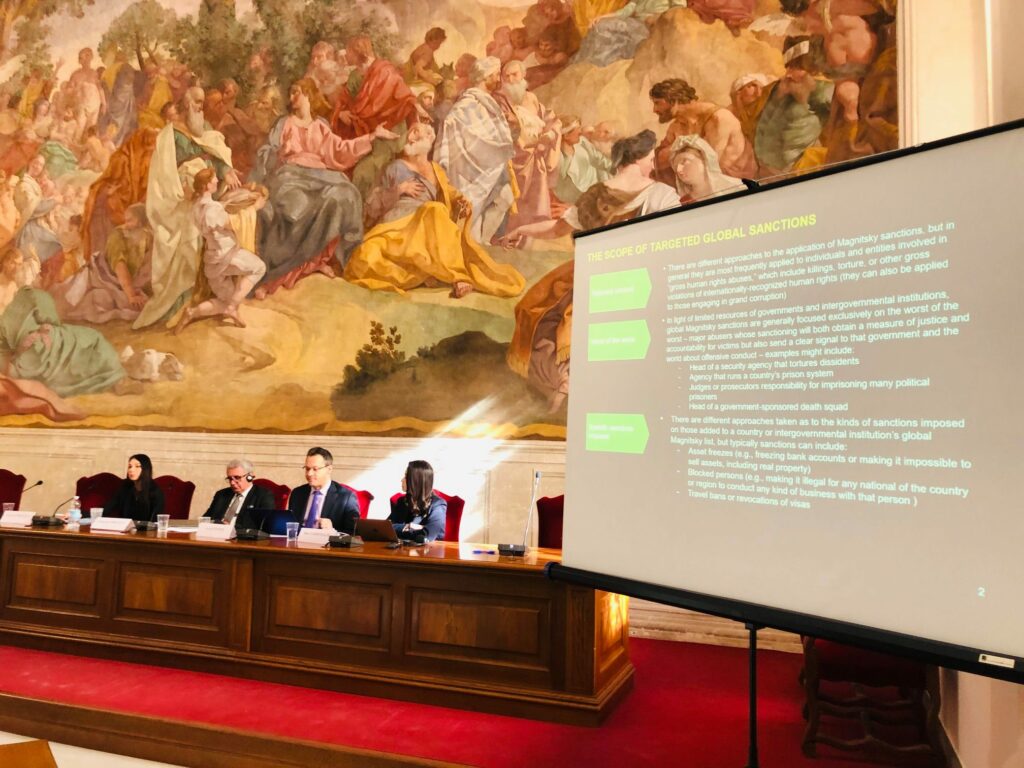 On February 6-7, 2020, a delegation of the Open Dialogue Foundation went on a two-days mission to Rome with the aim to relaunch the draft bill for an Italian Magnitsky Law, following a series of events in the Chamber of Deputies and the Senate on the matter.

Paola Gaffurini, Advocacy Officer at ODF, was accompanied by Bota Jardemalie and Ana Ursachi, both lawyers and human rights defenders, from Kazakhstan and Moldova respectively. Eleonora Mongelli, Vice President of the Italian Federation for Human Rights, also accompanied the delegation as one of the key campaigners for the adoption of the Magnitsky law in Italy.

On the first day, February 6, we had the pleasure to discuss examples of systematic human rights abusers as well as possible sanctions against them in the Italian parliament. Among the lawmakers we met with were: the President of the Human Rights Committee of the Senate, Stefania Pucciarelli (Northern League), as well as MPs Mauro Del Barba (Democratic Party) and Lia Quartapelle (Democratic Party), both actively engaged in advancing US-like Magnitsky laws at the Italian Chamber of Deputies.

In particular, speakers presented the scope and benefits of Magnitsky-type sanctions, general guidelines that must be met by governmental bodies to justify a listing, the political and financial consequences of limiting one’s ability to travel, access one’s assets and to do business in different places in the world and the role of non-governmental organisations in the process of evaluating and listing human rights abusers and selected case studies.

Specifically,  Bota Jardemalie introduced the case of Vladimir Plahotniuc, Moldovan fugitive tycoon and media mogul, who, thanks to the efforts of anti-corruption activists and the opposition, has been sanctioned by the United States, Switzerland and Liechtenstein, with his name made public in international fora. Jardemalie also presented a case of potential listing, namely the one of Nazarbayev’s son-in-law, Timur Kulibayev – also called the “oil prince” – who benefits from full impunity due to the extensive PR efforts of Kazakhstani state officials in Switzerland and elsewhere.

Right after the event, we had the pleasure to present this instrument to Italy’s Ministry of Foreign Affairs encouraging the government to adopt this tool to fight impunity in non-democratic countries.

We thank all the speakers for joining this important discussion and Radio Radicale for streaming and recording the event. We reiterate our support for the adoption of an Italian Magnitsky Law and we encourage Italy’s Chamber of Deputies to continuously work on a legislative proposal, similar to the one adopted by the Senate on March 6, 2019.