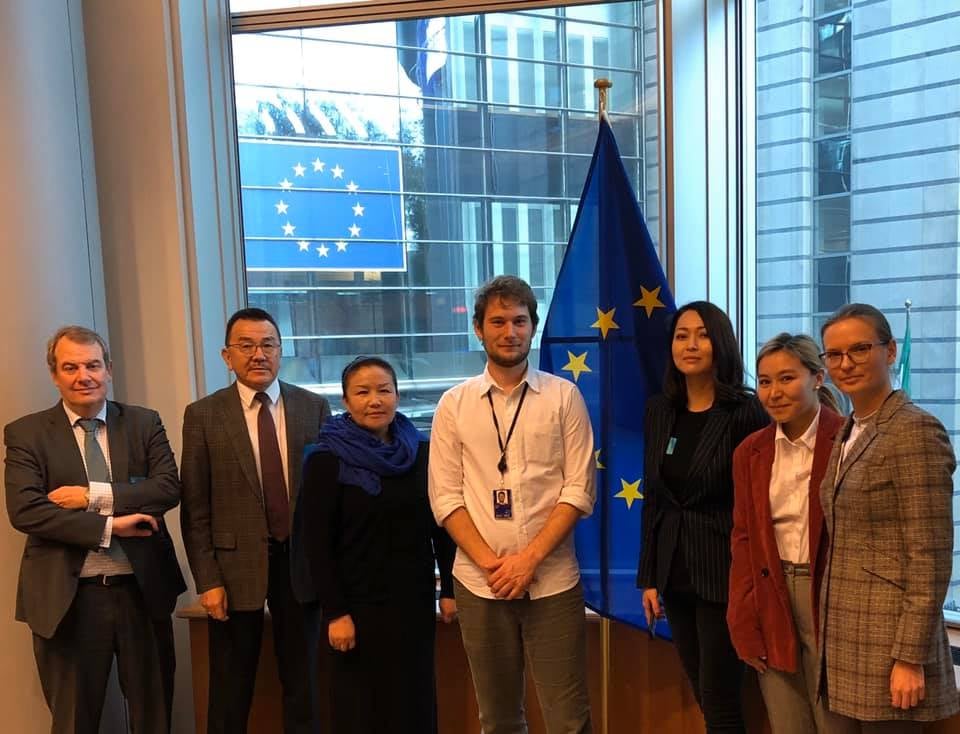 China’s Contribution to Human Rights Abuse in Kazakhstan: Event at the EP

Over the past years, China has increased its presence in Kazakhstan, thus making their economic and political relations more robust. Importantly, human rights and the survival of civil society are at stake, as Kazakhstani activists are afraid of the growing dependence onChina, a country which has been often perceived as a bearer of abuse and corruption, and whose influence in the country is re-shaping the domestic human rights policy according to the Chinese methods of repression. Our event “Strengthened China-Kazakhstan Relations: What Impact on Human Rights?” was dedicated to this matter.

The event was organised by the Open Dialogue Foundation (ODF) and the Italian Federation for Human Rights (FIDU) and co-hosted by MEPs Nacho Sanchez Amor (Spain; S&D) and Niklas Nienaß (Germany; Greens/EFA) on November 19, 2019. Moderated by our President Lyudmyla Kozlovska, the discussion at the European Parliament in Brussels brought together experts, human rights defenders and lawmakers involved in the topic.

We thank MEPs Nacho Sanchez Amor and Niklas Nienaß for their speeches in support of civil society and human rights defenders in Kazakhstan, as well as victims of political persecution both in Kazakhstan and in the Xinjiang region of China. Both MEPs reminded the audience that business relations cannot flourish if there is no mutual trust among the parties involved and exposed the potential human rights consequences of the slogan “economy first”.

Lawyer and human rights defender Bota Jardemalie explained how the economic dependency of Kazakhstan on China has affected the country’s policies towards activists, particularly against those defending ethnic Kazakhs and victims of China’s internment camps. During her intervention, Jardemalie stated that “the authorities in Kazakhstan are trying to hush up the issue of so-called re-education camps, or, more accurately, concentration camps in East Turkestan, Xinjiang.  Kazakhstan’s Minister of Foreign Affairs even stated that “there are no ethnic Kazakhs” in those camps”. “To preserve its relations with China, Kazakh authorities routinely deport or extradite refugees from Xinjiang, unless cases become publicly known” she added before listing the most recent individual cases, such as those of two Chinese citizens, ethnic Kazakhs Murager Alimuly and Kaster Musakhanuly, who, in October 2019, illegally crossed the border of Kazakhstan to ask for political asylum and are now facing deportation to China.

Aizhan Kassymova, an activist of the Qaharman human rights initiative, discussed the rising of anti-Chinese protests and the systematic repression of fundamental freedoms in her country. In particular, she explained in detail the wave of protests that swept through the whole of Kazakhstan in September 2019 – protests that have been brutally squashed by the authorities. She also presented individual cases of Kazakhstani mothers who have been prosecuted for ‘extremism’ just for participating in peaceful protests.

Ryan Barry – Project Coordinator & Researcher at the World Uyghur Congress – presented a comprehensive context of Sino-Kazakh relations, with a focus on its negative impacts on the Uyghur population. He notably stated: “the Kazakh Government finds itself in a difficult position: China exerts incredible pressure and control in the country due to its leveraging of predatory loans, BRI projects & investments and political pressure. To avoid offending China, the Kazakh Government has addressed the situation bilaterally and in private, focusing on ethnic Kazakhs held in the camps”.

The statement of Eleonora Mongelli – Vice-President of the Italian Federation for Human Rights – focused on the role of the Chinese authorities’ strategies for mobilizing its international allies, including its neighbouring countries, in detriment of human rights. Specifically, she declared that the Chinese government “is leading a fast growing «community of authoritarian regimes» that tends to vote compactly in international instances”, thus fighting back any international criticism of human rights violations.

We were also honoured to have listened to the testimony of Sayragul Sautybay, a Chinese teacher and ethnic Kazakh, who had escaped from China’s internment camps. In Kazakhstan, she was denied political asylum, but was granted refugee status in Sweden.