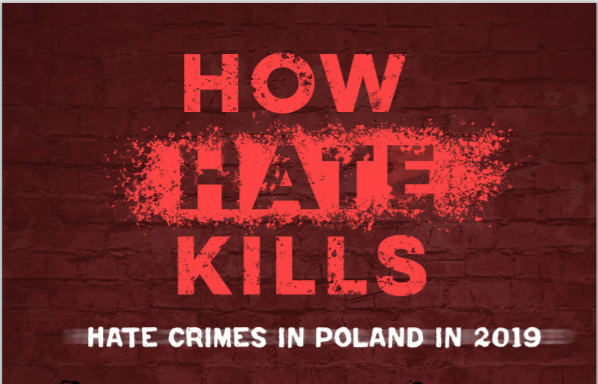 Over 70 instances of hate crimes on racist, homophobic, anti-semitic, xenophobic and other grounds. This grim record is a result of Open Dialogue’s latest investigation into hate crimes in Poland. The report covers the period stretching from January to December 2019, and complements the Office for Democratic Institutions and Human Rights (ODIHR) annual reporting on “hate incidents” across the OSCE area. Most alarmingly, the report reveals a hate crime-conducive environment with the authorities turning a blind eye, or – worst still – being complicit in endorsing and spreading intolerance, stigmatisation, discrimination or even incitement to violence.

As assessed by ODIHR, hate incidents are substantially underreported in Poland, and it is only knowledge of the scale of the problem that can help combating hate crimes effectively. To address the issue, the Foundation, for the second year in a row, joined the ODIHR’s “Hate Crime Reporting” initiative that will result in a hate crime database published by the organisation every year on the International Day for Tolerance (16 November).

Based on in-depth media research, cross-checked for the accuracy and reliability of data, our report describes 73 instances of hate crimes that took place in Poland in 2019, grouped in the following six categories: (1) crimes on the basis of race and national origin; (2) homophobic crimes; (3) crimes based on religion; (4) anti-semitic hate crimes; (5) hate crimes based on nationalist and nazi views; and (6) politically motivated crimes. Following the OSCE criteria, the report defines hate crime as an act constituting an offence under criminal law that is motivated by bias. In turn, bias motivation is understood as stereotypical assumptions, intolerance or hatred directed against a particular group sharing a common characteristic, such as race, ethnicity, religion, nationality, or sexual orientation. Hate crimes described in the report take different forms of threats, property damage, assaults, or even murder; and are directed against individuals, groups or property (e.g. places of worship).

Each section is, however, preceded by a brief summary of the most important developments in a given area since the coming of the Law and Justice party (PiS) to power in 2015. Taking into account the political context is vital. The described hate crimes occurred against the background of the PiS rule notorious for its nationalist and anti-LGBT rhetoric and an uncompromising authoritarian political style that has exacerbated the discrimination and violence towards marginalized groups. The hate crime-conducive environment is created by the authorities on at least two levels: (a) hateful rhetoric echoed by the ruling party’s top echelons and the state-owned media; and (b) insufficient intervention by state institutions that creates an atmosphere of impunity.

Although the report gathers instances of hate crime committed throughout Poland in 2019, it wouldn’t do justice to omit its political dimension. In particular, in 2019, the authorities were especially keen on resorting to an anti-LGBT rhetoric. PiS and other conservative parties based their 2019 election campaign for the European Parliament on homophobic slogans, with the government presenting support for LGBTI rights as “an attack on children and families”. One of the most disturbing examples of the state-sponsored homophobia was also a country-wide action in which more than 80 Polish cities declared themselves to be “LGBT-free zones” or “LGBT ideology-free” (the Lublin Province Governor even gave awards to local officials “for fighting LGBT”).

PiS also hasn’t abandoned its play on anti-immigrant sentiments that was the leitmotif of the party’s triumphal campaign to the parliament in 2015. For one thing, the radical language of public debate has remained unchanged, which significantly affects the way immigrants are perceived in Poland. Simultaneously, some of top PiS politicians’ proclamations as well as government’s policies incite anti-Semitism and, at least implicitly, encourage and embolden radical nationalists, right-wingers.

In fact, after gaining power in 2015, PiS built a propaganda machine which uses a language of hatred of an intensity unknown in Poland after 1989. Many Poles are convinced that it was the creeping pervasiveness of the government-sponsored hate speech targeted at the ruling party’s political opponents that has contributed to the tragic death of the mayor of Gdańsk. In January 2019, Paweł Adamowicz, known as an advocate for tolerance and critic of the PiS government, was stabbed in the heart while he spoke at a charity event. The 27-year-old assailant – whose sanity is still questioned – killed Adamowicz while shouting political slogans against the party which the mayor used to be a member of. The tragedy sent shockwaves through Poland, demonstrating painfully how hate kills.