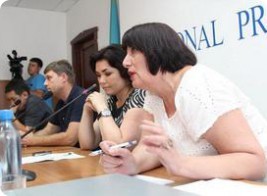 Stan tv and its connection with the protest movement in Mangystau

Journalists from the VIDEO PORTAL “stan” were thrown out from their own offices and disconnected from internet BECAUSE OF COVERING THE SUBJECT OF STRIKES IN MANGISTAU (WEST KAZAKHSTAN).

Three inspection services at once – the Fire Department, Health Inspection and National Service of architectural and building control – came to check out the “Stan” video-portal editorial offices for violations. The reason for the check-up were the complaints of building residents (where editorial staff settled their equipment) against satellite dishes (which allow watching satellite TV and internet connection). They are supposed to be radioactive.

Health inspectors rapidly filed a suit based on those complaints against editorial board demanding to shut down their activity. The funny thing is – they’ve won: journalists were forbidden to use their own offices and dishes. Simultaneously, it never occurred to the judges that the whole city is crawling with exactly the same satellite antennas, rented from providers which had presented all Permits to Use the equipment.

“STAN” is a team of journalists that show life within a country in picture shots and reports. They don’t have legal permission to show those materials on public and national TV channels and put them into their video portal on the internet. “STAN” is a unique project – there’s nothing like it in other countries of Central Asia where even words “independent TV channel” are extremely rare.

For another thing “Stan” collaborated with independent Central Asian TV channel “K-PLUS” which long ago had become an eyesore to Kazakhstan Ruling Body. “K-PLUS” is well-known for their hard-edged interviews with politicians Akejan Kajelgelidin, Mukhtar Ablyazov and with president Nazarbaev’s ex-son-in-law Rahat Aliev. Also for four months “K-plus” has been making reports about striking oil workers in Mangistau which are disgruntled at working environment. Since “K-plus” is registered in the European Union, Kazakh leaders are helpless when it comes to shutting down its activity, the only thing they can do is to shut down its partner in that region – “Stan”.

“Stan” has two offices in Almaty. Both are rented to legal entities. First is “Stan-production Company” which is the home for the main staff of the “Stan” channel. Second legal entity has been created not so long ago as an individual project – a “Nemistan” journalistic investigation agency. The government has complaints against both companies and that means that the whole “Stan’s” editorial team is in the firing line.

WHAT where residents complaining about? Or were they residents?

The official reason for shutting down the videoportal. Complaints, which, according to the words of those who filed them, were drawn up under the pressure of the militia agents, served as the reason for the check-ups.

“I’ve signed because they came to me from the Criminal Police. And they’ve told me… at first they enquired after my health. How do you feel? I’m fine thank you. I’m under treatment right now actually. It’s because you have a radioactive dish on your roof, he says. So take it off, what seems to be the problem? I answer. We cannot just simply take it off you need to right a complaint to proper authorities. Ok, I answer, then you should tell it to the people that live here, they should know that there’s a radioactive dish on the roof. Let them decide themselves. Well, if the people decide they will tear it off and that would be illegal, he tells me then. It’s better to make everything legally. Ok then, I say, let’s do this…

….All these comrades that visited me, you see (shows telephone numbers and names). How should I know what dish is that? If he said so – he’s a representative of authority. He came and asked why they always have their windows closed all the time? What is it? What if there’re terrorists there? What if they all are…?

It’s a radiation, they say, all cockroaches are dead. We don’t have any cockroaches. Of course, I start to worry, I’m a spiritual person actually and I don’t need all of this, but for the good of people…

…They’ve been here already, some colonel came. I’m not happy with all this but I’ve already signed all this…

It is worth mentioning that all the “dishes” (antennas) installed on the rooftops are mostly common ones. There’re thousands all across Kazakhstan roofs and all are similar to these ones. They are rented out by companies that provide citizens with internet and satellite TV services. And the editorial board has contracts signed with providers regarding equipment rental and offering services.

But health inspectors weren’t satisfied. They stated that editorial board needed a permit from Sanitary & Epidemiological Service to use internet and watch TV channels.

“But there’s no such law to make an organization that uses internet to ask Sanitary & Epidemiological Service for permission to connect to internet, says the lawyer from “Stan” confusedly, we showed them a contract with “Kazakhtelecom”, a contract with “Icon” regarding satellite TV channeling, but that’s probably not enough for them”.

Interesting is “Astel” service provider presented all legal permits (among other things permits from health inspectors) for the “dish” installed for the “Stan” team to the judges. Sadly that didn’t help at all.

Are you sure you’re healthy enough to work in mass-media?

As it turned out later all complaints initiated by law machinery were not even a half of the story. This gang up on “Stan” team could solve only one problem – to leave the journalists without their portal so they could not work online. Second objective was much harder to accomplish – they had to boot the redaction board out from their office.

Apart from it, health inspectors demanded to present them health certificates from ALL editorial personnel. Even though that kind of information is private and confidential it didn’t stop the health inspectors.

The journalists from “Stan” had decided to play along and to get all the certificates needed, and also to have all contracts intact, to measure the amount of noise and temperature level in all offices by an independent licensed research company. Still, that didn’t satisfied men from SES so they came with their own equipment. After two arrivals they found a violation in one of the office rooms – the temperature was about 2 degrees higher than normal estimated rate. This was exactly the fact which constituted the ground to file a suit demanding termination of any activities in that office.

And this way, now, following the court’s decision, the editorial board cannot perform any activities in their own offices. Journalists are forced to work on the street in the proper sense of the word.

Who BENEFITED FROM SHUTTING “STAN” DOWN?

Journalists and “Stan” editorial staff have no doubts that all check-ups and all legal actions initiated by government agencies are dedicated to one thing – to force “Stan” to shut down all activities and to prevent the company to work in normal operating conditions. They call attention to some facts:

1.       All three inspecting government agencies came to both “Stan” offices at the same.

2.       The shut-down was coordinated from one source – journalists found out that across the street from one of the offices someone has established so called “headquarter”. There were some strange people in business suits with portable radio sets hanging there around all day. And those people were strangely attracting inspectors’ attention all day.

“I think all of this was ordered from above, says Elina Jdanova. I gear it to “Stan” activities.  We always have our own point of view. Particularly at present “Stan” gives coverage to strikes in Magistau. Probably it’s connected to our collaboration with foreign television companies – we provide with information all large agencies like “Reuter”, “Associated Press” as well as many Russian agencies. Also we collaborate with “K-plus” TV channel which becomes more and more popular in our country. I think that’s the reason for their attempts to shut us down”.