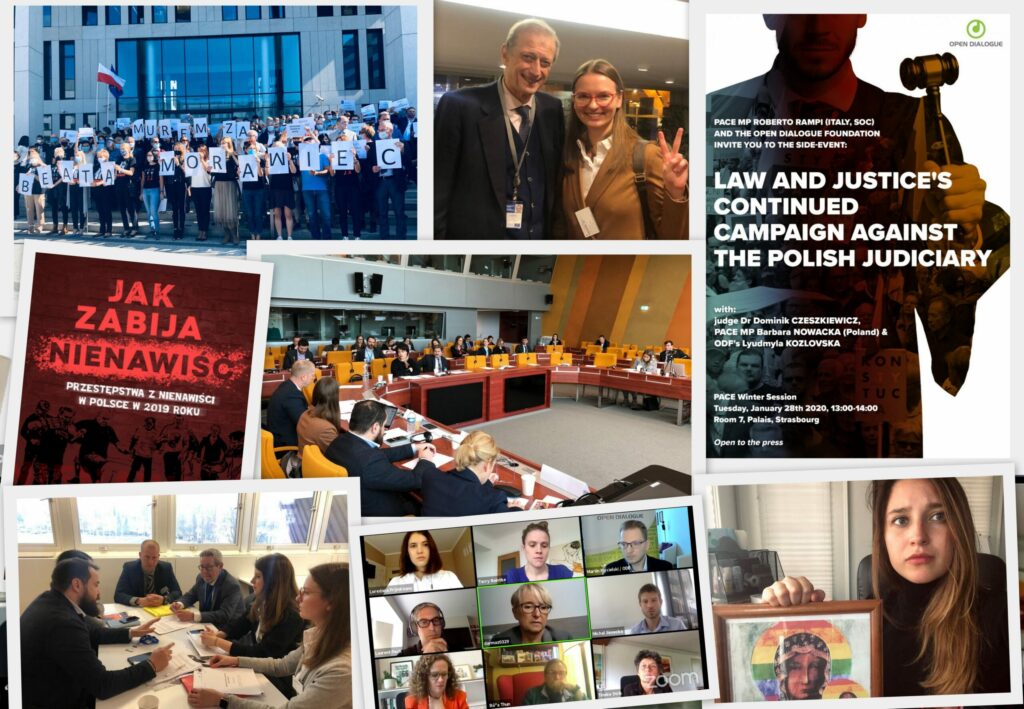 It’s time to take stock: how we fought for the rule of law in Poland in 2020

The tumultuous year 2020 is coming to an end. It is time to sum up what we have managed to do in the fight for the rule of law in Poland.

The pandemic was not an easy time – forced austerity and accelerated adaptation to new conditions. We closed our offices and moved our democracy and rule of law activities into the digital space. Despite these upheavals, we organised a series of events, initiated open letters and appeals, and published reports for a number of European and international institutions to mobilise them to respond to the progressive erosion of the rule of law in Poland.

We view the brutality of the smear campaign and other persecution used against us by the Law and Justice (PiS) government and its subordinate institutions as recognition of the effectiveness of our actions.

We have been called various things on TVP and in other centres of party propaganda. What has been said and written about us? Judge for yourself: “Preparation for political lynching”, “Soft treason”, “The state is too weak in the face of agents of influence”, “The scenario of exclusion of the state implemented in the Senate and the Supreme Court”, “They are blatantly bluffing!”, “Street riot”, “Betrayal of Polish interests!”, “What a bottom!”… and so on.

What were the actions that so infuriated the authorities in power at the time?

We organised a series of meetings with judges persecuted for their independence, including Beata Morawiec, Dariusz Mazur and Dominik Czeszkiewicz, with members of the European Parliament and members of PACE (Parliamentary Assembly of the Council of Europe);

We initiated a series of appeals and open letters signed by leading experts and legal circles in connection with the crisis of the rule of law and attacks on women’s rights in Poland, including:

– an open letter to the European Commission to oppose the takeover of the Supreme Court and to take steps on the so-called “muzzle law” (April);

– an open letter to the independent judges of the Supreme Court to continue their fight for independence from political pressure (May);

– a letter to the European Commission in defence of the persecuted judge Igor Tuleya (June);

The data collected by our monitoring have been included, among others, in the PACE resolution on the functioning of democratic institutions in Poland, the ODIHR report on hate crimes in OSCE member states, the European Commission report on judiciary in Poland (EU Justice Scoreboard 2020), the first Rule of Law Report of the European Commission, which monitors the rule of law in the community.

In addition, there are a number of lawsuits for the protection of our personal rights against leading PiS politicians and the media supporting them, which we brought against them, and one investigation for abuse of power to our detriment. The current state on this front was recently summed up by Onet: What do the Internal Security Agency and Ministry of Foreign Affairs have against Kozlovska? Nothing, but the hunt goes on.

We also have bad news for our psychophans from the power camp: we are not going anywhere. We promise to mess it up at the highest level even more in 2021. 😉

More on this topic:
Poland , Open Dialogue , persecution of lawyers , rule of law in Poland , PiS