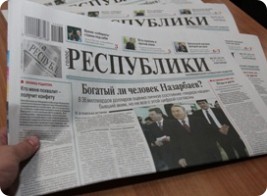 Is ‘Respublika newspaper’ going to be closed for… spreading extremism?

Today in Zhanaozen police officers stopped the car transporting the copies of the newspaper “Voice of the Respublika.”
According to the information obtained by the editors, representatives of the coalition “People’s Front of Kazakhstan” bought our edition with the aim to freely distribute it among the striking oil workers in Zhanaozen. However, the traffic police stopped the car and illegally confiscated 200 copies of the newspaper, allegedly on the grounds that  the newspaper contains “the signs of extremism”.

The driver of the car was apprehended. Now he is in the police station and he is writing a an explanatory statement to the worker of the Department to Combat Extremism. The worker of the department said that a copy of the newspaper will be sent for examination, because “the paper may contain materials of extremist character.”

The Editors are convinced that the incident which occurred – the confiscation of the newspaper and unfounded accusations of extremism – is not nothing else but a new attempt to close the newspaper, which criticizes the government and tells the truth about the events in Zhanaozen.

Yermukhamet Yertysbaev,  President Nazarbaev’s advisor on political issues has once mentioned the possibility of such a turn of events with regard to the newspaper. Now, as it seems, his words begin to come true.

Let us remind the fact that since September circulations of the newspaper are printed in a printing house in Russia, which means that the journalists found ways to circumvent the blockage of the printing houses in the country. Apparently, this fact has also played a role in the decision of “Ak Orda” to launch a campaign aiming to shut down the opposition newspaper.