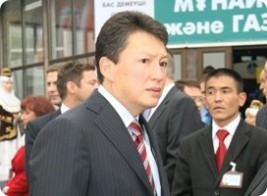 Zurich. A criminal investigation in Switzerland has been opened into allegations of money laundering against Timur Kulibayev, son-in-law of Kazakhstan President Nursultan Nazarbayev.

The Office of the Attorney General of Switzerland opened a criminal investigation in September 2010 into allegations of money laundering against Timur Kulibayev, one of his associates, Arvind Tiku, and others.

The investigation focuses on allegations of laundering approximately US$600 million held in bank accounts in Switzerland.  The funds are alleged to have been initially obtained from bribes paid to Kulibayev and other proceeds fraudulently obtained by Kulibayev between 2000 and 2005 in relation to the sale of Kazakhstan state-owned oil and gas assets.

Pursuant to Swiss law, the Office of the Attorney General of Switzerland only opens a criminal investigation where there are sufficient grounds to suspect that a criminal offence has been committed.  Acts under investigation were allegedly committed in Zurich, Geneva and Lugano Switzerland.

The Office of the Attorney General of Switzerland is acting pursuant to charges being brought by a group of Kazakhstan citizens opposed to the state-sponsored corruption prevalent in Kazakhstan under the regime of President Nursultan Nazarbayev.  The parties filing grievances are all domiciled in Kazakhstan and wish to keep their respective names anonymous given the severe risks of retaliation.