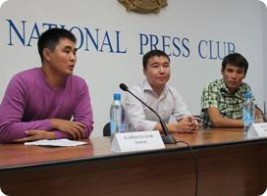 On 19 September Sherniyaz Shagatai, a journalist of the Kazakhstan team of Stan TV,  who was at Kalmakan’s municipal hospital No 7, was summoned to the Doctors’ Meeting Room by a nurse. An unknown man was waiting for Shagatai there. The nurse told Shagatai that they needed to have a talk and left. A stranger introduced himself as an agent of Kazakhstan’s law enforcement agencies. However he did not show his official identification or mentioned his name.

At the same time, the stranger was well informed about Sherniyaz Shagatai’s personal life and that of his family and friends. He related in detail what time Shagatai leaves for work, what time he returns, and quoted addresses of the journalists’ colleagues. In the course of the conversation he actively inquired about Stan.kz’s activities. He was particularly interested in salaries of the staff, how many employees there are, who does what, if the leadership often makes business trips, what constitutes television technology of the companies and how TV channel K+ uses video materials by Stan.kz.

In a word, he demanded full information about activities of the team and about the people who work at the channel. Sherniyaz Shagatai categorically refused to do so.

After several days two more strangers came to see him at the hospital. Having said that they are also officers of some unidentified law enforcement agency, they reiterated their demands. This time after he journalist declined, they started threatening him saying that no good will come out of this. They hinted that he or his family can meet with an accident or alternatively a criminal case may be opened against them.

The same “business offer” was sent to a different journalist of the Kazakhstan team of Stan.kz Azamat Esbergen. During his recent business trip to Mangystaunskaya Region where he collected data about oil workers on strike, he received a call from a certain Azamat. Having introduced himself as a law enforcement officer, he said that he was involved in founding a club for young journalists, which would raise ethnic problems, and offered to become a member of the club. He then offered to meet in order to discuss the work of the club. Azamat Esbergen declined saying that he was on a business trip.

The second time the caller introduced himself as Dimash and offered to meet again.  When the journalist replied that he was on a business trip, the stranger said that he was well aware of when the journalist had returned to Almaty. The last time, when ringing a week ago, the stranger again demanded a reply to his offer. Having received a refusal, he hung up the receiver, dropping a phrase that a journalist will regret…

The editorial team of the video portal Stan fears provocation directed at their journalists and considers it essential to immediately inform the public and law enforcement organisations of these unprecedented cases of pressure against journalists.

The editorial team also will demand immediate involvement in the situation on the part of law enforcement agencies. Threats against journalists’ lives and those of their families coming from unknown people who position themselves as officers of law enforcement agencies are not compatible with the principles of rule of law. This is a telling example of pressure against independent press and an attempt to hinder professional activities of journalists.