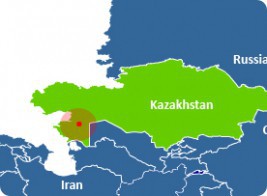 Strikes of oil and gas industry workers in western regions of Kazakhstan have been continuing for over five months now. A deep legal and factual analysis of the situation has been conducted by Paul Murphy, MEP, who was in Kazakhstan with official visit, as well as by other independent experts, human rights defenders and social activists. But for an external and unengaged observer, it is somewhat difficult to understand the multitude of facts and evaluations. It is even more difficult to understand the context of this situation and its possible economic, political and even geopolitical consequences.

Kazakhstan is the key country in Central Asia, which has very strong and influential neighbours (particularly Russia and China). Also, the presence of another strategic player – the United States of America – is strongly felt. However, over the past 20 years, during which the country has been ruled by President Nursultan Nazarbayev, Kazakhstan has managed to achieve some stability, even in such a competitive environment. Although at a considerable cost.

Internal stability was ensured by restricting the activity of independent civil society organizations and gaining control over the informational space. The external balance has been achieved by providing more or less uniform access to the extraction of raw materials to companies of the most influential countries in the region. But large-scale protests by Kazakh oil workers, of which the world first heard in May and which are lasting until now, have become a litmus test and shed light on the fragility of such stability.

The cause of the mass strikes of oil workers (with subsidiary companies of Kazmunaigas -Karazhanbasmunai and Ozenmunaigas – as epicenter of protests) were the demands of better working conditions  (which do not always meet the standards of safety), obtaining fair payment for their work in adverse conditions and demand to equal their salaries with the salaries of foreign workers, which work with them side-by-side.

The administration of the oil company Karazhanbasmunai did not meet the demands of trade unions and even the oil industry did not want to carry out further negotiations. Instead, with the involvement of local authorities and security forces, the administration tried to break the strike several times, which resulted in massive clashes between protesters and security forces. The similar situation was observed with Ozenmunaigas and Ersai Caspian Contractor companies (Italian holding ENI is the co-owner of the last one), when workers of those companies decided to support their colleagues from Karazhanbasmunai.

In the context of understanding the causes and consequences of these developments, it is necessary to draw attention to two points. Firstly, it is the reaction of national and local authorities. Secondly, the reaction of citizens from other regions of Kazakhstan, recorded in the results of opinion polls and comments in the materials related to the strikes on information portals and social networks.

As for the reaction of the authorities, at first glance it can be surprising how rigid and bias their position was. Neither the government nor the federation of trade unions or the Ministry of Oil and Gas, or the Ministry of Labor and Social Policy did not try to act as a mediator in this conflict, by which they aggravated the situation in the region and exacerbated social tensions. It is even more strange that both the state and local government protected exclusively the interests of employers and completely ignored the opinion of the workers, who are also the most numerous voters.

But the situation is starting to be a little clearer, if you look at those whose interests are represented in the employing company. Since 2007, the co-owners Karazhanbasmunai have been the company Kazmunaigas, which is in 100% controlled by the Kazakhstan Holding for Management of State Assets “SK”, and China’s state investment company CITIC Group. If we consider that China was one of the few sources of financing of Kazakhstani economy in the crisis year 2009, and that the activities of local government bodies depend heavily on Chinese sponsorship and local investments (which form 30% to 50% of the regional budget), then  possible motives for the local and national governments are becoming clearer.

Probably an important role in suppressing conflict by security forces plays also reluctance on the part of President Nazarbayev and his son and a possible successor Timur Kulibayev (who is also the Chairman of the Board of Directors of KazMunaiGas and the Chairman of the Board of SK) to allow the creation of an environment in which this organized professional protest can be politicized and may contribute to the emergence of competing political forces. Given his advanced age, as well as the latest information about the deteriorating health of President Nursultan Nazarbayev (which provokes a revival among the potential candidates to replace him), this factor must also be considered.

However, his authoritarian style of government, as well as inherent censorship and limitations of any independent social activity, can have dire consequences, which are not always immediately apparent and even more so – are not always predictable. In particular, we are talking about strengthening the split in the non-monolithic Kazakh society in the area of regional, ethnic and social discrimination, as illustrated by the response of citizens from other parts of the country to the events in western Kazakhstan.

Thus, according to a study conducted in major cities of Kazakhstan by the Institute for Policy-making (July 2011), about 30% of respondents reported indifference to the question of how they relate to strikes of oil workers. And nearly 30% said that the salaries of oil workers and so are quite high and their protests are groundless, and 20.5% of respondents believe the protests are a “dangerous precedent that could serve as a role model.” The most skeptical toward the protesters were residents of the eastern regions and the capital of Kazakhstan, while the most supportive  were those from the western regions.

At the same time, according to the analysis of critical reviews of protesters in the featured articles on the Internet, most critics did not even know / do not take into account the fact that the western region of Kazakhstan, which is the most conservative, religious, and has its own specifics. Most of the families have many children, the wives in these families do not work, and the father has to  provide for 3-5 other family member. Also, in the western part of Kazakhstan, where industry is more developed, the products are significantly more expensive than in the eastern part of the country (where agriculture is more developed).

The lack of understanding between different regions of Kazakhstan widens the gap between them and contributes to the radicalization of their western part. This year there have been two explosions near government buildings (one – in the western city of Aktobe, where a suicide bomber blew up, the second one – at the building of the National Security Committee in Astana). Such trends in the long term may threaten the growth of terrorism and separatism, which were not typical for Kazakhstan.

The protests of Kazakh oil industry workers, when considered in the context of regional specifics as well as political and economic processes in the country, speak for themselves. But the more so, they pose questions to anyone who wants to live in this country, whether to invest in it and cooperate with it.

More on this topic:
Kazakhstan , strike