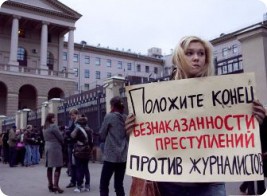 When 19 years ago the whole world watched USSR collapse, it seemed, with the fall of communism the freedom of press and media to be the problem only in the much distanced African countries. It also seemed to be once and for all on the territory of OSCE the complete freedom for journalists’ self-expression and a free access to information for the citizens.

Now these expectations are considered to be very naive. The main assumption, turned out to be wrong, is the idea of identical orientation of social and political processes in different post-soviet countries. Instead of one progressive process of consolidation of media freedom, though proceeding with different speeds, the further developments turned out to be just the opposite in reality.

During the “Yeltsin era” 1990 – 1994 (95) we observed a period of rapid prosperity of independent media, achieving a significant progress in freedom of press; and at the same time, a period of “hot journalism”, when the state was unable to defend its journalists from criminal threats, but still was least of a threat for journalists itself.

But then in period of Putin, Nazarbayev, Lukashenko and Kuchma 1994 (95) – 2004 the state has gradually restored its control over the media – not directly but first of all by force of submission of the business interests of media-owners to the state apparatus. Many incidents of obviously ordered murders and kidnappings of journalists happened during this period, with almost unmasked participation of state employees, and row of trials against mass media. In Belarus and Kazakhstan journalists are public judged on political articles. At the same time there is another widespread repression form in Ukraine and Russia: periodicals are closed down for alleged “financial violation”, and fines are imposed for “defamation”, when the claimant is usually a state official.

Modern time, considered to have a starting point together with the “Orange revolution” in Ukraine in 2004. After the “Orange revolution” success, for the first time did the protective regimes in Russia, Kazakhstan and Belarus see the true value and political potential of network media, which were gradually developed after electronic and print media were set under state supervision, and since 2000 they had grown to practically fully satisfy a demand of a civil society for independent timely information. The confrontation between the state and media is taken to the Internet and it is not mass media (a legal entity or just a team of journalists) that is the main figures in this confrontation, but individual web-reporters, or even bloggers.

The problem of protection of Internet network environment, as well as individual network journalists and bloggers from the pressure of the authorities today has to seek attention of the international community, interested in spreading of the principles of liberty of speech and information across the former Soviet Union. This is a completely new situation and some old organizations, primarily addressing the protection of professional journalists officially belonging to the «reporter’s guild», were largely not prepared to it. The line between a journalist and an active citizen is rapidly wiping out, and active citizens of Kazakhstan, Russia, or Belarus, in fact, are already equated in their states to reporters based on the risk of their activities, but not in terms of protection by the international community. Hopefully this imbalance will be removed in the nearest future, at least partially, and the traditional protection of reporters would be extended to also cover every citizen availing of the Internet for the purpose of dissemination of independent information. It is a fast and efficient way to establishing a real civil society in the countries where large media are experiencing pressure of the government control.