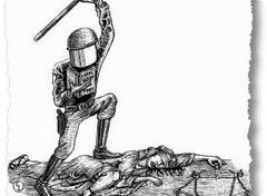 Protests of the oil sector workers: social organizations and mass media under increased level of pressure

The protests of the oil sector workers did not leave other residents of Western Kazakhstan indifferent; they fueled tension between the authorities, NGOs and independent media. The culmination of the conflict was the arrest and conviction of the labour union activist, Natalia Sokolova, who was sentenced to six years’ imprisonment on charges of inciting social discord.

Natalia Sokolova worked as a lawyer in the labour union of the employees of the Karazhanbasmunai company. Prior to passing the sentence on the 8th of August, she had been fined twice for organizing an unsanctioned meeting on 17th and 21st of May.  Since the night of the 25th of May, she had been initially kept in administrative custody for 8 days, and since the 1st of June – due to a preliminary investigation in criminal case for inciting social discord, which was initiated by law enforcement agencies on the request of Yuan Mu, the president of Karazhanbasmunai, a citizen of China.

At the same time, according to Natalia Sokolova’s husband, Basil Chepurnov, the union’s first demands to increase the level of pay for oil sector workers were put forward as early as in 2009, and during the trial  some documents and records emerged, proving that his wife demanded from the employer to reopen the arbitration on controversial issues in April, 2011. These facts confirm that Natalia Sokolova has complied with all formal standards of non-conflictual resolution of the situation, but they were not taken into consideration in the court, which sparked new unrest among the protesting oil sector workers.

Freedom House, an international human rights organization, demanded to immediately release Natalia Sokolova, and a famous British singer Sting decided to cancel his concert in Kazakhstan after receiving the information about the repressions of the protesting oil sector workers, which was passed to him by Amnesty International organization.

Arresting of Natalia Sokolova was followed by detentions of other representatives of the labour union movement and civil initiatives of solidarity with the protesting oil sector workers. On the 17th of August, Akzhanat Aminov, an activist of the strike of the oil sector workers employed in OzenMunaiGaz was convicted to one year of suspended imprisonment with a 2-year trial period. A day earlier, on the 16th of August, Zhanbolat Mamay, the leader of the youth organization Rukh Pen Til was arrested for ten days. On that day he had just returned from Moscow, where he participated in a mass meeting and a press conference in support of the striking oil sector workers of Mangistau.

As of today, the following persons are under pressure from federal authorities: Kuanysh Sisenbaev, one of the leaders of the labour union of the Karazhanbasmunai (driven to a susicidal attempt, later admitted at hospital); Natalia Azhigalieva, an activist of the strikers of the Ozenmunaigaz; Nuryash Abdreymova, a politician (fined for participating in an unsanctioned rally, beaten by unknown delinquents in front of the Department of Internal Affairs in the city of Zhanaozen); Dmitry Tikhonov and Armand Ozhaubaev, participants of the rally in support of Natalia Sokolova (they were arrested for 5 days), Zhanna Baytelova, a journalist of the newspaper “Voice of the Respublic” (she was arrested for 14 days).

The events that fanned the flames of social discontent are, in particular, a murder of Zhansaule Karabalaeva, a 18-year-old daughter of an oil sector worker and Zhaksylyk Turbaev, a 28-year-old labour union activist. The protesters link their assasination to their participation in the strikes. A very recent dramatic event is the death of Abay Abenov, a 30-year-old former worker of Ozenenergoneft, which took place at night on October 3, 2011. The striking workers explain the tragedy as a consequence of a desperate situation in which most of them find themselves, since they have not received their salary for the last four months.

In total, during the strike at least two and a half thousand employees of the oil companies were dismissed. Most of them may face serious problems with employment because of the reason and the procedure of their dismissal. The situation may significantly increase the social tension in the cities of Zhanaozen and Aktau.