On October 26, 2011in the city of Zhanaozen, at approx. 5.30 p.m. local time, an armed attack was carried out against Yestay Karashaev, a  dismissed striking oil sector worker. The  attack  occurred at the entrance to his  residence  in close to the  door of his apartment building 25 of the 3rd Microregion flat 58 in the city of Zhanaozen. Two unknown assailants ran towards Y. Karashaev and used aggressive force which resulted in  his falling down the stairwell. He  also suffered severe blows to the head before gunshots also to the head which were fired from a firearm loaded with plastic ammunition; as a result, he lost consciousness. His relatives called an ambulance and  the police who found a rubber bullet at the scene. 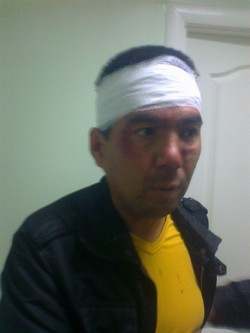