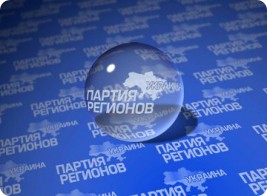 The moment I received an e-mail titled “The Party of Regions is heading left,” my first guess was that it’s still another politician dropping another unrealistic slogan. Yet what I read later topped all my expectations – the Party of Regions signed a memorandum on cooperation with the Group of the Progressive Alliance of Socialists and Democrats.

Theoretically this shouldn’t even be surprising as such situation has happened before – for instance, the Ukrainian Green Party is member of the European Green Party, and Yuliya Tymoshenko’s Block has worked with the European People’s Party. I probably don’t need to mention that both these alliances were caused exclusively by the political circumstances. The union between BYUT and the conservatives was particularly remarkable, because back in 2006 Yuliya Tymoshenko sought to be part of the Socialist International. In any case, it is nothing compared to the “socialist” Party of Regions.

Is that supposed to mean that the richest Ukrainian citizen Rinat Akhmetov, oligarch and member of Parliaments from the Party of Regions, has decided to remember about social responsibility? Or does it mean that the Donbass will now cease to be the largest Ukrainian pollution source? Or that its inhabitants will now be working in normal and safe conditions? I have big doubts about that.

I don’t hold out much hope for the Party of Regions caring about the citizens more than about the unobstructed and jam-free passage of its leaders on the Kyiv VIP highway. Or for the Prime Minister Mykola Azarov, who was the one signing the memorandum with the S&D Alliance, to turn into a feminist and apologize for his sexist words (“implementation of reforms is not a women’s business”), and plus to that to find offices for more women in the largest European government. Instead, as a result of the new political orientation we may expect replacement of the liberal Vice Prime Minister on Economics Serhiy Tigipko by a socialist or a social-democrat.

We may only dream that after the local elections in cities where the Party of Regions would win there will be plenty of garbage cans and cycling paths, public transport will finally start functioning, especially at night, while activists of the “Save Old Kyiv” movement will stop worrying that Peyzazhna Alley might be built up.

Or the declared “leftism” of Azarov’s team might promote democracy, and mass media will no longer be writing about the return of totalitarianism, that the Parliament and Constitutional Court will be independent entities instead of President’s puppets? The artists also will get some sound sleep now that the “democratic” government will set about solving the censure problem encapsulated in the National Expert Committee on the Protection of Social Morals.

And all this is thanks to another Ukrainian political force becoming member of the European party structure.

Europe was supposed to spread the democracy “virus” but, instead, it traded this mission for much pettier business. That’s why I fail to understand what was guiding the S&D Group, and its President Martin Schulz, when he said: “We discussed very intensively before we signed the agreement that we will cooperate on the basis of all European values: democracy, openness and freedom; and in the light of this mutual understanding, I’m looking forward with a lot of hope for our cooperation.” I fail to understand this because the Party of Regions has so far promoted no European or leftist political values.