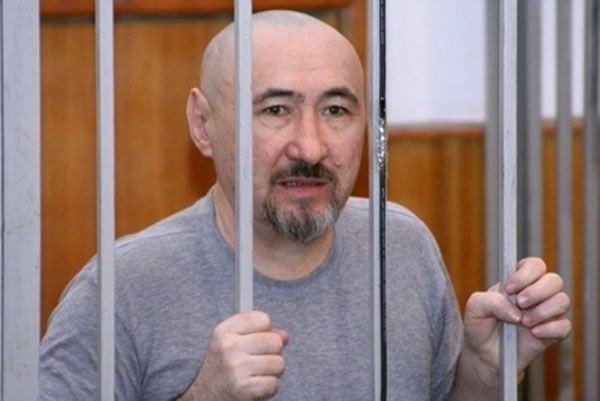 13 March 2014 | Editorial office
Table of contents:
Local populace clashes with authorities in the Shanyrak microregionLegal trial of the Shanyrak clashes participantsAron Atabek imprisoned in the Karazhal colonyTwice imprisoned in Arkalyk

The well-known Kazakhstan dissident and poet as well as political prisoner Aron Atabek has been behind bars for over six years now. For a number of years, he has been kept in a solitary confinement cell in oneof the most rigid regime prisons of the country; even though imprisoned, in his works he has continued to criticise the regime of Nursultan Nazarbayev, due to which he was subjected to various forms of pressure and harsh treatment from the administration. According to the court sentence, the 61-year-old dissident will only be allowed to walk free in 2024.

Aron Atabek (Edigeev) was already active as a dissident back in 1989-1992, being the publisher of the (delegalised in Kazakhstan) newspapers “Alash” and “HAK”. He was also the leader of the national independence party “Alash” and president of political council of the Kazakhstan National Front “Kazak Memleketi”. The latter was considered by him as the third (next to the ruling regime and the opposition) power capable of defending the interests of the Kazakh nation and the country’s other ethnicities, and, what is more, preserving the country’s integrity. The basis of his political views was formed by nationalism. In the years of independence, he went on to criticise the ruling authorities and Nursultan Nazarbayev’s regime, calling him “a usurper and a tyrant”, thwarting the natural development of the Kazakh nation.

Local populace clashes with authorities in the Shanyrak microregion

On 14.07.2006, thfiles,e microregion of Shanyrak near the city of Almaty saw clashes between law enforcement authorities and the local populace, as a result of which, dozens of people suffered injuries. One of the police officers, Aset Beysenov, was doused with petroleum and set alight. He died after several days in hospital due to the heavy burns he suffered.

The microregion was the construction and location site for 155 unauthorised houses, wherein approximately 4000 migrants resided, having arrived from other regions of the country. The majority of the residents moved into the region from their auls in search of employment, having no documents to attest to their land ownership (or were given counterfeit ones). Apart from that, in certain parts of the region, the construction of housing was forbidden due to the intersection of a gas pipeline. The land had been sold to third parties, and forced removals were conducted based on court verdicts. However, the officials who had given the migrants falsified documentation did not give a thought to the resolution of the residential issue. On 13.07.2006-14.07.2006, representatives of municipal structures arrived at the microregion at the head of heavy demolishing equipment squad, intent on demolishing the migrants’ settlement. The inhabitants of the microregion opposed the intended knocking down of the residences; in the clashes that ensued, the law enforcement officers used their batons and plastic stun bullets, and some protesters also resorted to violence. One of the police officers, Aset Beysenov, was dowsed with gasoline and set on fire; as a result, he died in hospital of the burns suffered.

Aron Atabek, having been the president of the community land and residential committee of Shanyrak, helped the protesters defend their homes. Moreover, there are numerous witnesses to the fact that Aron Atabek was attempting to prevent the violence. On 17.06.2006, Aron Atabek was summoned to an interrogation to the Municipal office of internal affairs as a witness; however, he was arrested the very same day.

On 18.10.2007, the Almaty municipal court pronounced a sentence on the case of 24 persons charged in relation with the Shanyrak disorders.  20 of them were given conditional sentences, 4 were sentenced to over 10 years’ imprisonment. One of them was Aron Atabek, who was sentenced to 18 years’ imprisonment in a strict regime penal colony; his charges were organisation of resistance against legal authority representatives, taking hostages and murder with extreme cruelty. The accused dissident denied all the charges, claiming that the  guilt for the events that transpired laid with the authorities.

Aron Atabek was convicted on the basis of testimonies by two of the prosecution’s witnesses – Aybatyr and Bauyrzhan Ibrahimov. Subsequently, both of them recanted their testimonies at a later date, having explained their actions by torture and threats from the authorities. And so, Aybatyr Ibrahimov in his interview stated: “I had been brought to the Auezovsk interior department. Was held in a basement and kicked for five days. In the evening they brought in Aron and said he was the organiser. Later on, they filled out the protocol and had me sign it. I have never seen the culprits”.

The defence of Aron Atabek appealed to the Court of Cassation for yet another hearing of the witness, but they were refused. The revised testimonies by witnesses were submitted to the Supreme Court and Prosecutor General’s office of the Republic of Kazakhstan. However, on 12.06.2008 the Supreme Court upheld the resolution without any changes.

Aron Atabek was relocated to the Karazhal municipal strict regime colony in the Karaganda district.

On 11.09.2012, a group of prisoners, Aron Atabek included, addressed the international and Kazakhstan agendas with a complaint on torture and inhuman conditions of confinement. Regardless of his ischemia, radiculitis and pneumonia, Aron Atabek is still being confined to his cell. In his later interview of December 2012 to the Azattyk Radio he said that during his confinement in the colony, he had suffered tuberculosis and an eye condition on his own without receiving any medication.

The Central Asia Monitor journalists, attempting to conduct an interview with Aron Atabek, point out that the colony officials of Karazhal did not even try to hide the fact that Aron Atabek’s contacts with the mass media were being particularly curbed.

Aron Atabek did not remain in Karazhal continuously: twice (in 2009 and 2013) he was transferred to the “closed” prison of Arkalyk as penitentiary measures for his insubordination.

In 2009, on charges of disobedience and insubordination to administration, Aron Atabek was relocated to the Arkalyk municipal prison of Kostanaysk district for a duration of two years. The dissident himself claims the decision was related to his poems “Nazarbayevdom and poetry” and the article “Nazarbayevdom and Revolution”, where he criticizes the acting Kazakhstan authorities.

In early 2012, Aron Atabek was relocated to Karazhal , where he was kept in an isolation ward for the duration of eight months.

On 15.11.2012, the court again issued a decision to incarcerate Aron Atabek in the Arkalyk prison for two years on charges of insubordination to administrative requests. He was charged with 30 various violations, included in the violations were such offences as having a beard, burning his prison uniform and demanding that he be given boiling water. On 04.12.2012, the dissident was relocated to solitary confinement in Arkalyk. Aron Atabek himself considers the chief reason for his Arkalyk imprisonment to be the publishing of his “Heart of Eurasia” book online, wherein he criticizes the regime of Nursultan Nazarbayev and calls the Zhanaozen events “a mass execution of peaceful populace”.

The Kazakhstan human rights activist, Evgeniy Zhovtis notes that Arkalyk is the only Kazakh prison (the remaining places of confinement being colonies of either general, strict or special regime). The prison of Arkalyk is condidered to be the harshest in terms of its conditions in the whole of Kazakhstan. It is there that recidivists and especially dangerous criminals are sent to serve their time. The law has it that the term served in the prison may not exceed 5 years. It is possible, however, for the convict to be redirected from the colony to a prison in case of his persistent violations of the regime. As the human rights activists claims, it was precisely this law that the authorities used in respect to Aron Atabek, placing him into Arkalyk prison several times.

Aron Atabek indicates that his sentence was served in the Arkalyk prison “strict regime’ ward, which is a “prison inside a prison”, where life-imprisonment sentences are served. The prison has 24-hour video surveillance, and convicts are allowed to go out for brief walks in the open air only wearing special handcuffs and masks in order to prevent communication. Connections to the outside world are also severely limited – telephone calls and visits are strictly forbidden. There is also information that sometimes masked men entered the confinement cell and conducted searches and confiscating everything Aron Atabek had managed to write. In his interview with Radio Azattyk, Aron Atabek said that during his first year in Arkalyk prison, he was not allowed to receive a single book, apart from a chess handbook, but was later given a TV set and a radio.

Zhayna Aydarhan, the wife of Aron Atabek, said that following her husband’s imprisonment: “We receive a letter or perhaps two from him a year. They are really, really brief, just a couple of sentences, as larger ones are not allowed by the [prison] administration. Visits are forbidden. Aron himself asks us not to apply for visits, as in such cases he is under even larger pressure… He basically never leaves the strict regime confinement, such as isolation detention cell or the like!”.

In November 2013, the Karaganda Court of Cassation district upheld a protest by the prosecutor and repudiated the 15th November 2012 court decision on Aron Atabek’s transfer to Arkalyk prison, after which he was transferred to the prison of Karazhal. On 04.12.2013 Aron Atabek was sent from the Karazhal colony to Karaganda solitary confinement (resolution AK 159/1-SI-16). From there, he was to be transferred to one of the colonies, located closer to the registered place of residence of his family.

Askar Aydarhan, son of Aron Atabek, expressed a supposition that such a significant relaxation in his father’s imprisonment regime may be evidence to the fact that before the EXPO-2017 exhibition in Astana, the authorities wish to look more favourably in the eyes of the international community.

While remaining in his confinement, Aron Atabek became the laureate of two prestigious prizes. In 2007, the Kazakhstan community awarded him the “Svoboda” prize, and in 2010, Egypt awarded him the “Freedom to Create” in the “Imprisoned artist” category.

Aron Atabek also found his defenders in the international organisation of Pen-International, fighting for freedom of speech. On 05.10.2012, a piquet and a concert were held in support of Aron Atabek in the vicinity of Kazakhstan embassy in London. Aron Atabek was included in the first published list of Kazakhstan political prisoners on May 31st 2013, created by human rights and civil activists, also featuring Zauresh Batalova, Evgeniy Zhovtis and Lukpan Akhmedyarov.

For many representatives of Kazakh civil society, the poet and dissident Aron Atabek is a moral authority and role model. There are grounds to presume that his participation in the Shanyrak clashes with the police was a pretext for the authorities to get rid of this active regime critic. Taking into account the poet’s age, he may indeed not live to see the time of his liberation.

We underline the necessity of a detailed investigation of Aron Atabek having been subjected to forms of pressure as well as him being kept in the harsh conditions of the Karazhal and Arkalyk corrective facilities. We demand that Aron Atabek be transferred to one of the colonies of Almaty district, closer to the permanent place of residence of his family. The administration of the colony is obliged to prevent any further pressure against the convict, provide him with all the legal prerogatives, including rights to correspond and visits from family and relatives, as well as give civil organisations unrestricted access to the colony for the purposes of monitoring the observance of Aron Atabek’s rights.

We call for Aron Atabek be included into the list of persons to be subjected to amnesty during the revision and passing of a subsequent amnesty legislation bill. We also call upon the President of Kazakhstan to consider the possibility of pardoning Aron Atabek, and the National human rights Ombudsman of Kazakhstan – to submit a respective application on request for pardon.

You may support our plea by writing to the following addresses: