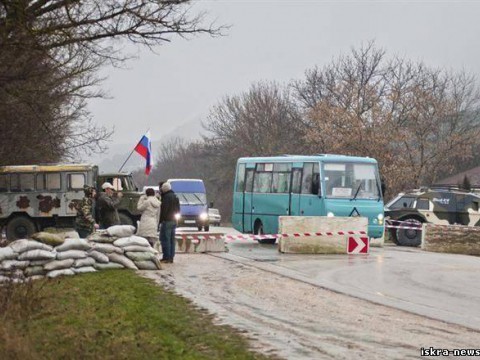 On 11.03.2014, at the Crimean border, an aggravated robbery was committed against the film crew of the “ТК SKY TG 24” Italian television channel. Similar cases have become common on the Crimean peninsula in parallel with the start of the occupation by Russian armed forces. Journalists are no longer allowed to enter Crimea, being robbed, beaten and even kidnapped – all in order to prevent their objective coverage of the true situation in the region.

The film crew of “ТК SKY TG 24”, consisting of 2 journalists – a fixer and a driver – were detained on Kherson-Armyansk checkpoint, right at the very border of Crimea. The very moment they attempted to start filming they were stopped, told not to film, asked to present a licence and/or accreditation for Crimea. Such requirements are not in line with Ukraine’s Law on Journalism, according to which, only the bodies of public authorities are empowered to demand the presentation of a licence by media representatives, and only in cases of gross violation of the journalists’ duties, as defined in Article 26 of Ukraine’s Law on Information.

After the incident, the film crew drove away and started taking landscape shots. Soon they were approached by armed men (Russian military and others wearing “Berkut” uniforms), who started to threaten them with physical violence.

In response, the journalists offered to erase the data recorded and leave, but the armed persons were not content with these conditions. The journalists were forced to give up all their equipment, such as camera batteries, USB drives containing data, an online-streamer and two notebooks. Only after that, were the film crew released.

As the Open Dialog Foundation was told by the film crew’s driver yesterday evening (i.e. 11.03.2014), the TV channel journalists were allowed to enter Crimea, but their materials and equipment were not returned to them – “Until the content on data storage devices is sorted out”. The journalists are now trying to retrieve their equipment by acting via the regional police departments at Armyansk city.

Such cases have not been anything out of the ordinary in Crimea in the recent times. On 06.03.2014, the centre of Simferopol saw the robbery of the “Associated Press Television News” media crew.  The robbery was conducted by armed individuals, their faces covered with black masks. According to the journalists, they were approached by unknown persons, who demanded that the lighting devices be switched off. Soon the initial assailants-to-be were joined by two more, who took photographs of the filming equipment and started claiming the journalists were, as a matter of fact: spies. Soon after, armed persons appeared on the scene, put the reporters against the wall, cut their connecting cables and carried their equipment away.

On 07.03.2014, near the №2355 military base (Sevastopol) an assault took place against a group of journalists from the “Inter”, “5 kanal” and “STB” TV channels. They were severely beaten, and subsequently robbed (their wallets and mobiles were taken). The act was performed by the so-called “Crimean self-defence forces”, including the former “Berkut” officers as well as the Russian Cossacks.

A similar modus operandi was also implemented by the militants on 08.03.2014, during their assault on “Hromadske.TV” and “Gazeta po-ukrainski” journalists. In the vicinity of the Simferopol enlistment office, the mass-media crews were beaten, their flash-cards were taken away and their equipment damaged. On the morning of 08.03.2014, the same enlistment office saw shots being fired at a car, belonging to Euromaydan activists from Kiyv. “We were going to drive off, we got in the car, I was filming with my mobile, after which they started running to us and shooting, we managed to drive some 700 metres towards the shopping mall and then called the police and the TV channel. Over 10 shots were fired at our car, damaging the tyres; you can also see the bullet marks on the car body” – a witness to the events, Aleksey Tamrazov, reported.

One more example of a very similar type is the 08.03.2014 attack on the Estonian “TV3” channel correspondent, Allan Mook and his operator, Vaiko Vares. People in masks ran up to the Estonian reporters, demanding that they ceased filming; next, they had their equipment seized by force before the assailants disappeared. The TV channel supposes the attackers may have been Russian military personnel.

Today, on 12.03.2014, at approximately 1 p.m., at the checkpoint of Armyansk, “Berkut” officers and self-defence fighters beat and detained a media crew (an operator and a journalist) of the French channel “France TV1”. In the words of the TV channel journalist, there was a local driver accompanying them whose whereabouts are at present, unknown.

The Ukrainian Ministry of Foreign Affairs stated that all the liability for violations of rights and freedoms of civil populace (including journalists) on the territory of the Crimean peninsula now lies with the Russian Federation. “Representatives of Ukrainian and foreign mass-media are facing constant threats to their fully lawful professional activity, limitations on their freedom of movement on the Autonomous Republic of Crimea territory, direct threats and even aggressive actions by force, assault and robbery, especially from armed groups, supported by the self-proclaimed Crimean authorities” – the official statement reads.

Such a position should not automatically relieve the Ukrainian government of their obligations pertaining to the implementation of subsequent steps in order to curb separatism and provocations in the Crimean peninsula. It is appropriate to consider the introduction of a visa regime with Russia, as well as declaring the status of persona non grata to politicians and activists who supported the initiative of troops being led into the Crimean territory.

Today, Crimea is witnessing the purposeful thwarting of journalistic activity that could provide an objective assessment of the situation and the actual processes on the peninsula. With the purpose of preventing such an objective assessment, the journalists are not allowed to enter Crimea, are beaten, or have their equipment taken away. The cases cited above are a testimony to the catastrophic character and scale of danger that the situation on the Crimean peninsula poses. Without objective coverage of the events by the mass-media, conditions are created for further atrocities against peace and humanity in the Crimea.

As was mentioned earlier, it is thanks to the journalists that numerous pieces of evidence were uncovered regarding the region’s actual occupation by the armed forces of the Russian Federation. The journalists send reports from all but the hottest spots of the Autonomy, including places where Ukrainian military bases are being blocked.

Open Dialog Foundation condemns these attacks against journalists and calls for an immediate end to this extraordinary level of censorship. We appeal to the international community to take action by all mechanisms possible in order to de-escalate the situation in Crimea and provide for the safe and secure activity of the journalists.

More on this topic:
freedom of media , kidnapping