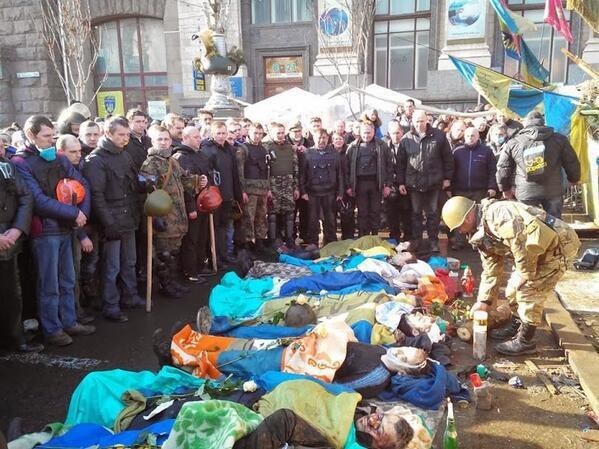 Ukraine: more than 100 people have been killed since the beginning of the conflict; approximately 300 are considered missing

The Ukrainian revolution that began as a peaceful rally in support of the country’s European integration (the EuroMaidan), and later transformed into massive anti-government protests, resulted in an armed clash between protesters and police officers. The police purposefully opened fire on participants of the protests. The exact number of casualties is still to be determined.

The mass rallies in support of Ukraine’s European integration began on 21 November 2013. After the violent dispersal of activists on Independence Square on the night of 31 November, 2013, the mass anti-government protests began. The fundamental unwillingness of the country’s leadership to accept the demands of protesters led to a gradual escalation of the conflict.

The height of the confrontations fell on 18-20 February 2014. At that time, dozens of people were killed in Kiev – both protesters and police officers. It is worth mentioning that the circumstances surrounding the death of the protesters differed significantly at various stages of the conflict. During the events of 18-19 February, 2014, most of the reported casualties resulted from beatings and multiple gunshot wounds. On the other hand, on 20 February, 2014, many activists were killed by single gunshot wounds to the head, neck or heart. This suggests that shots were fired with the sole purpose of killing. In addition, the law enforcement agencies also used snipers. Targeted shots were fired on unarmed protesters (and even medical workers). A demonstrative example is the case of a 21-year-old medical volunteer, Olesya Zhukovskaya. On 20 February, 2014, a sniper shot her in the neck. Thanks to timely medical assistance, activists managed to save the girl’s life.

Currently, investigators are striving to determine the identities of persons involved in the shooting of protesters in Kiev (including the events of 20 February 2014). Thus far, no official results of the investigation have been announced. Presently, there are at least three versions of what happened:

Chebotarev was also involved in the payment of ‘bonuses’ to the officers of ‘Berkut’ Special Forces and internal troops of Ukraine for their work performed. During the sanguinary events in Kiev (throughout all three months of the conflict) he had the power to coordinate the actions of ‘Berkut’ and ‘Titushky’ [the hired provocateurs]. Chebotarev also rewarded police management with bonuses for their activities. He also has direct and friendly relations with the former Minister of Internal Affairs of Ukraine, Vitaliy Zakharchenko. Earlier, the son of politician Anatoliy Gritsenko, one of the leaders of the Automaidan, Aleksey Gritsenko, wrote on his Facebook page that Chebotarev’s gang was involved in kidnappings of the Maidan activists and hiring of ‘Titushky’. Aleksey Chebotarev had his ‘cover’ in the Security Service of Ukraine – the head of the Department for the Protection of National Statehood, General Sergey Ganzha.

On 20 February 2014, on Institutskaya Street, where snipers killed most of the protesters, Sergey Pankov was detained by the Maidan activists. As it transpired, Pankov was involved in Aleksey Chebotarev’s OCG and, supposedly, he could have worked as a sniper during the shooting of protesters.

The names of 112 people (including the law enforcement officers) killed in Kiev and the regions of Ukraine as a result of the events associated with the EuroMaidan have been published so far. 101 of them participated in the anti-government protests (Annex 1). Civil society activists say that the death toll is far higher. For example, among the members of the anti-government protests, approximately 300 people are still considered missing. Thus, the number of fatalities among the protesters may still increase significantly. It should be also taken into account that during the conflict, the media reported on unidentified bodies, discovered in Kiev and near the city:

Also, the names of 11 deceased police officers and internal troops (Annex 2) were made public. However, this number may also increase significantly. On 21 February, 2014, the press service of the Ministry of Internal Affairs of Ukraine reported the death of 16 officers of military services. The Ministry also reported that 130 law enforcement officers had been shot. In total, 410 officers of the Ministry of Internal Affairs have been hospitalised since 18 February 2014.

In general, during the clashes in Kiev and the regions of Ukraine, at least 113 people were killed, 112 of which were identified. Among the victims are five citizens of other countries (Georgia – 3, Russia – 1, and Belarus – 1). The largest number of casualties were residents of Lvov Province (19 people) and Kiev Province (15 people).

The Open Dialog Foundation hereby calls on the Ukrainian authorities to carry out an objective and comprehensive investigation into the crimes committed by all parties to the conflict during the events associated with the EuroMaidan. In order to ensure the transparency and objectivity of the investigation, both Ukrainian civil society experts and international experts should be engaged in the proceedings.

List of victims
More on this topic:
EuroMaidan , Kyiv