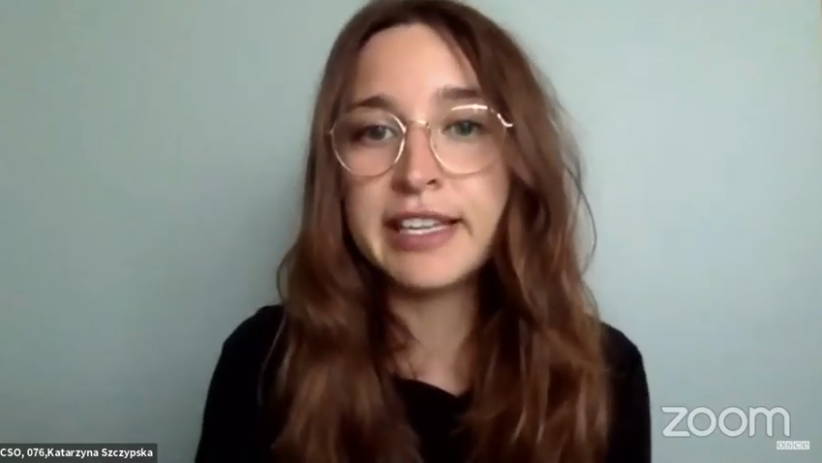 Polish citizens deprived of their “right to know”. Our intervention at OSCE

Since the Law and Justice party (PiS) came to power in 2015, the Polish authorities purposefully obstruct access to information – either by refusing to provide information, delays in responding or delivering incomplete information. This both unconstitutional and undemocratic practice is yet another example of Poland going rogue under the PiS leadership, stated our advocacy officer, Katarzyna Szczypska, at the Second Supplementary Human Dimension Meeting (SHDM), and urged the OSCE bodies to take a firm stance and discipline the Polish authorities to comply with the organisation’s principles.

The Foundation regularly raises the alarm on the democratic malaise in Poland under the PiS government, informing European decision-makers and stakeholders on the developments in the country. Our latest intervention took place at the second SHDM – an OSCE platform for exchanging views. During the discussion, which gathered OSCE and civil society representatives from across the “OSCE region”, Katarzyna Szczypska raised the issue of the deprival of the “right to know” of Polish citizens.

Under Article 61 of the Constitution every Polish citizen can turn to any institution or body for information on public matters. As Katarzyna pointed out, in practice, however, access to public information is today purposefully obstructed by authorities. Citizens frequently face either a refusal to provide information or a delay in responding (up to 2 months). Often the answers are also incomplete and serve only to discourage the citizen or to prolong the proceedings. In fact, cases are handled in such a way as to force the citizen to take the case to court – which for many citizens is simply not feasible due to time or other constraints.

An example of this mechanism was the request to publish the lists of signatures supporting candidates to the National Council of the Judiciary, initiated by Patryk Wachowiec and Kamila Gasiuk-Pihowicz MP, where administrative courts – first the Voivodeship Administrative Court and then the Supreme Administrative Court – ordered the Chancellery of the Sejm (the lower chamber of parliament) to disclose these lists, revealing the names of judges who gave their support to candidates to the Council. The obstruction of these court rulings was achieved by the Law and Justice party with the help of the Head of the Office of Competition and Consumer Protection, who blocked the publication of these letters citing concerns over GDPR – an obviously false premise.

Following a complaint by a citizen, Konrad Pogoda, there is now an ongoing proceeding in the District Prosecutor’s Office in Warsaw for exceeding the powers of the Head of the Office of Competition and Consumer Protection. So to recap: a citizen received a court order for a state authority to provide information and the authority did all it could not to disclose the information. The lists were finally only published after a leak of one of them, for judge Teresa Kurcyusz-Furmanik, was published by the Gazeta Wyborcza daily.

Another notable case is that of photographs from the swearing in of Constitutional Tribunal judges Stanisław Piotrowicz and Krystyna Pawłowicz by President Duda – these were never published despite numerous requests.

There are also numerous examples of protracted proceedings, like the request for access to the protocol from a sitting of Olsztyn District Court judges, which was first extended by 2 months, and finally a ridiculous reply was provided, saying that the protocol “does not exist”. Similarly, a request for information on voting ballots printed for the cancelled May election was extended immediately following submission. A request regarding the same issue directed to the Prime Minister’s Chancellery received only a short email reply not referring to the question at all.

More on this topic:
human rights , Poland , rule of law in Poland , PiS