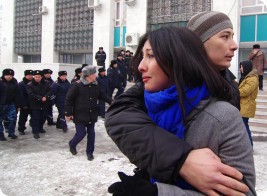 19 February 2014 | Editorial office
Table of contents:
Detention and trials of participants of the protest action on 15 frebruary, 2014Intimidating and exerting pressure on activists

In various cities across Kazakhstan, dozens of people took to the streets in protest against the collapse of the national currency. More than 40 protesters were forcibly taken to the police station. As a result of hastily conducted trials, to which relatives and observers were not admitted, the courts imposed fines on protesters, while one activist was sentenced to administrative arrest. The police interrogated a man who posted an entry critical of the authorities on Facebook, for 5 hours, and confiscated his computer.

On 11 February, 2014, the National Bank of Kazakhstan issued a decision to devalue the national currency of Kazakhstan, tenge. The government quoted the following reasons for the devaluation:

A new price of the dollar in the amount of 185 tenge, was set (previously, $1 cost 150 tenge). As a consequence, on the same day the exchange rate rose to 200 tenge in some places, and many banks stopped selling foreign currency. The next day, prices for some food products, imported household goods, electronic equipment, and building materials rose in most shops. Publicist Sergey Duvanov noted that the tenge devaluation by 20% means that all the people of Kazakhstan, who had savings in tenge, lost a fifth of their income. Chairman of the National Bank of the Republic of Kazakhstan, Kairat Kelimbetov, stated: “We will continue to mitigate sharp jumps in the exchange rate. The National Bank is well equipped to defend the new equilibrium rate – 185 tenge per dollar”.

Detention and trials of participants of the protest action on 15 frebruary, 2014

On 12 February, 2014, in Almaty, near the building of the National Bank, a protest rally against the devaluation of the national currency was held. Approximately 40 people, including civil society activists, representatives of NGOs and the civil society association ‘Let’s leave the housing to the people’, took part in the meeting. People came with the aim of discussing the subject with the representative of the National Bank, Kayrat Kelimbetov, and demanded his resignation.  Protesters were allowed into the building where they were met by deputy president of the National Bank, Kuat Kozhakhmetov. He assured those gathered that the authorities were monitoring the situation and striving not to allow price rises.

On 15 February, 2014, another rally against the devaluation of the tenge was organised in the centre of Almaty. According to various sources, the protest was attended by 100 to 200 people. Protesters gathered near the monument of Abai and demanded that the authorities resolved the social problems, which led to the devaluation. However, in addition to the social demands, anti-government slogans were also uttered during the rally. Around the monument, close to which the protest was held, the police installed iron fencing and did not allow pass. Also, at the time of the protest, bulldozers were being used to remove snow from the street where the protesters had gathered, thus blocking the protest action.

Civil society activists noted that the rally of 15 February, 2014 was spontaneous, and was carried out without the involvement of any organisers or political parties. In addition, a characteristic feature of the protest action was the presence of young people, prepared to actively defend their rights, although they had never taken part in such rallies before. At approx. 1 p.m., the protesters were joined by civil society activists, Kanagat Taketeva, Zhasaral Kuanyshalin and Dilnar Insenova, who had attended a meeting with the Akim [Mayor] of Almaty, Akhmedzhanov Yesimov shortly before the action. The meeting was devoted to social issues, including loans and problems with housing and the utility sector. The civil society activists were unhappy with the outcomes of the meeting, as the Akim of the city did not make any specific promises.

Following the action near the monument of Abai, protesters marched to the city akimat (local administration). When they approached the administration building on  Republic Square, the prosecutor Bauyrzhan Zhumakhanov announced to protesters that their rally was unauthorised, hence was illegal, and demanded that the crowd dispersed. Many protesters did not adhere to the calls of the prosecutor, and, as a result, the police dispersed the rally and began to violently force the protesters into the vans which had drawn up. A total of 29 people were detained near the akimat and were subsequently taken to the Directorate of Internal Affairs of the Bostandykskiy district. However, the protesters were not only detained near the akimat. For example, Dilnar Ensenova, who did not participate in the rally, was detained near the gate of the District Directorate of Internal Affairs. On 15 February, a total of 32 people were arrested.

The trial of all the detainees was took place a few hours after their arrest, on the evening of Saturday 15 February, 2014; untypical for Kazakh courts. Protesters faced charges under Article 373 of the Administrative Code (‘illegal organisation and holding of peaceful meetings, rallies, marches, pickets and demonstrations’). As a result, one participant of the rally, a young activist, Adilkhan Yermekov was placed into custody for 10 days, and the remaining defendants were sentenced to administrative penalties ranging from 1 to 20 MCI (monthly calculation index, i.e. from 7 to 146 euros). Previously, Adilkhan Ermekov hadn’t been engaged in vigorous activity in the public space. According to testimonies of eyewitnesses, no observers or relatives of the defendants were allowed into the courtrooms. The defendants were not represented by counsels, the decisions were issued in haste, and the severity of sentences depended on the degree to which the defendant admitted his or her guilt.

Intimidating and exerting pressure on activists

On 16 February, 2014, another rally against the devaluation of the tenge was held at Republic Square in Almaty. Under the guise of repair works, the area around the Independence Monument was fenced, and police were present. The action was called ‘Panties for Elbasy’. Journalists Zhanna Baytelova and Yevgeniya Plakhina, as well as an art critic Valeriya Ibrayeva intended to lay lace panties near the monument (recently, a ban was issued on the manufacture, import and sale of lace panties made ​​of synthetic materials in the territory of the Customs Union). Zhanna Baytelova explained this symbolic gesture as follows: “Our message was that by carrying out the devaluation, the state has left us exposed. The violation of rights is carried out across all spheres; they are now deciding what we are  to wear”. The police did not allow the activists to carry out their plan; they were arrested and taken to the Bastandykskiy District Department of Internal Affairs. A trial was held a few hours later, despite the fact that it was Sunday (usually Kazakh courts do not hold sessions on the weekends). The court ruled that each of the three activists were to pay an administrative fine in the amount of 18 500 tenge (approx. 73.15 euros) for disorderly conduct. Activists were not provided with legal representatives. No third parties were allowed to participate in the hearing. On 16 February, 2014, a further 8 people, who had been present during the rally at the Republic Square, were detained. They were released following their submission of explanatory notes.

On 17 December, 2014, a meagerly attended rally of people opposing the devaluation was held in Atyrau.Approximately 20 activists gathered in the central square, i.e. Makhambet and Isatai Square. They expressed their protest at higher prices for food and utilities. Deputy Akim, Gulmira Shakimova, came to the protesters, gathered at the square, and requested that the protesters with problematic issues contact the Akimat’s by phone using numbers designated for emergency assistance. The protesters agreed to establish a social group with Gulmira Shakimova for official communication with the akimat, and then dispersed.

Activists noted that the authorities had tried to intimidate residents of Almaty in order to prevent the holding of rallies in the city. In particular, on the eve of the protest actions, between 15 February, 2014 and16 February, 2014, information was disseminated through social networks that riots would take place in Almaty during the weekend, and Almaty residents were urged not to visit the areas where the rallies were scheduled to take place. Also, the day before the rally, some activists who had been distributing information about the planned action, including Galym Ageleuov and Dilnar Ensenovam received warnings from the Bostandykskiy District Department of internal Affairs, prohibiting violations of the law and informing about the liability prescribed for unauthorised mass actions.

A few days after the devaluation, on 13 February, 2014, Almaty resident, Tolesh Orazaliyev posted on his Facebook page an “Open letter of citizens of Kazakhstan to the President of the State, Nursultan Nazarbayev”, in which he, on behalf of the people of Kazakhstan, demanded the dissolution of the current government and parliament, introduction of amendments into the Constitution as well as introduction of Akims’ eligibility. On 15 February, 2014, law enforcement officials visited him at his home. After they became aware that Tolesh Orazaliyev had been present at the rally, they conducted a search, as a consequence of which, they seized his computers and disks. In the District Department of Internal Affairs, Tolesh Orazaliyev was interrogated for approximately 5 hours, as attempts were made to force him to give relay his password for his Facebook account and delete the statement made pertaining to Nursultan Nazarbayev, but he refused. Still, he wasn’t presented with formal charges. After questioning, Tolesh Orazaliyev was released, but he was obliged to appear in front of the police, prosecutor or court at first request.

Repressed citizens who expressed their protest against the government’s devaluation in the period from 12 to 16 February, 2014, were conducting a peaceful demonstration and did not pose any threat to public order. Along with assurances by the Kazakh authorities regarding the ‘progress in the sphere of reforms’ of the criminal law in Kazakhstan, there is systematic abuse of law enforcement and judicial bodies for people’s prosecution for political reasons. In particular, the rights to peaceful assembly and freedom of expression, as guaranteed by the International Covenant on Civil and Political Rights and the Universal Declaration of Human Rights, are being grossly violated.

The Open Dialog Foundation would hereby like to draw attention to the   abrupt deviation of Kazakhstan from the declared democratic course in the country’s development. Key European business partners in Kazakhstan should take note of these incidents, as they may also fall victim of unfair trial and lawlessness on the part of law enforcement bodies. This is especially true of the Spanish government, which is the only EU country to have signed an extradition treaty with Kazakhstan, and noted ‘a significant improvement in the sphere of human rights observance in Kazakhstan’. Spanish court and the government sanctioned Alexander Pavlov’s extradition to Kazakhstan, despite the lack of an independent judiciary in the country, the political nature of the case and the risk of torture.

We hereby urge all those willing to support our appeal to address the competent bodies of the Republic of Kazakhstan:

More on this topic:
economy , protest