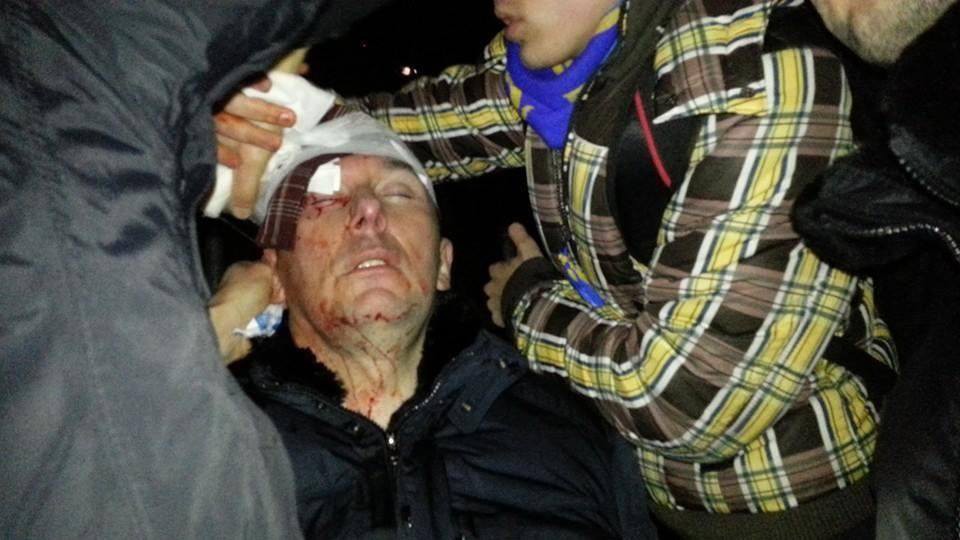 18.02.2014 clashes between the protesters and the police started again. Dozens of people have been killed, more than a thousand wounded. Hospitals are overcrowded with injured people. The authorities took advantage of the ceasefire: they mobilised their resources to solve the conflict by force. Without any legal grounds and de facto recognitions, state of emergency has been imposed in Kiev: entrances to the city are blocked, passability of streets is limited, public transport almost paralysed, unknown people with firearms are wreaking havoc in the streets, shooting at protesters and journalists.

Another stage of clashes between anti-government protesters and police forces started on February 18, 2014, in the morning. A column of protesters came to the building of Parliament, demanding the presidential party to make a compromise and accept new version of the Constitution that curbs the powers of the President considerably. Yet the ruling party refused to register the opposition’s bill. The protesters were stopped by police barriers. Soon several hotbeds of conflict emerged in the government quarter. By the evening the protest activists were pushed back to Maidan Nezalezhnosti, which was then assaulted by military forces.

The assault lasted the whole night between February 18 and 19. Officially, the attempt to clear up the square was conducted under the pretence of an anti-terrorist operation. As a result, the military forces managed to  take by storm and ruin most of the barricades erected by the protesters around the periphery of the square. Buildings of the October Palace and the Ukrainian House were taken by storm, too. During the militaries’ attempt to occupy the House of the Trade Unions, a fire broke out inside the building. People did not manage to put it out. All the three buildings had served as shelters and first-aid posts for the protesters. The House of the Trade Unions had also been the base of the National Resistance Headquarters – a coordinating body of the anti-government protests. Police officers beat the captured protesters ruthlessly.

Within a 2-km radius around the Maidan, traffic police checkpoints were put up. Many of them had 3 or more cars. Even in the small streets there are traffic police officers with machine guns, who inspect interiors and luggage boots of cars for arms and forbidden objects.

During the whole night the mass media reported news about groups of unknown people rampaging throughout the city, attacking Maidan activists, journalists and passers-by. The perpetrators used firearms; as a result, at least 2 people were killed.  According to some sources, they were shooting at the activists with Kalashnikov assault rifles, as evidenced by cartridges found on the scene of the accident. In Svyatoshinsky district of Kiev unknown people shot down a traffic police patrol unit: two police officers have been killed and one injured.

On February 19, 2014, in the morning, the Ministry of Public Health of Ukraine reported that 25 people had been killed between February 18, 10 a.m., and February 19, 6 a.m.: 8 people died after being hospitalised to the city healthcare institutions, 4 people died in the hospital of the Ministry of Internal Affairs, 13 bodies were brought to the City Forensic Office of Kiev. Most of the people killed had firearm wounds. Apart from this, the Ministry of Public Health reported that 241 injured people had been hospitalised. The identities of the victims are being verified. One of them is a journalist of Vesti paper, Vyacheslav Veremiy, shot by unknown people in the street in the city centre. Moreover, journalists report 4 bodies of activists within the territory of Mikhailovsky cathedral.

Taking into account the scale of clashes and the testimony of witnesses, the real number of victims may be much greater. As doctor Olga Bogomolets says, hospitals cannot cope with the flow of patients, new victims are being brought in constantly, hospitals let people with minor injuries  go home because of bed shortage. „There’s about hundred of them in every hospital, their total humber is measured by thousands”, says Olga Bogomolets.

In the evening of February 18 Kiev metro stopped functioning under the pretence of a terrorist threat. This brought about a traffic collapse, tens of thousands of people had to get home on foot from their working places. On February 19 the metro did not resume its work. Most of the offices and institutions in the city centre were closed as well.

On February 19, Pavel Lebedev, the Minister for Defence, confirmed that airborne forces from Dnepropetrovsk had been sent to Kiev. Officially, these measures were taken „to enhance the safety of bases with combat arms arsenals”.The situation in the regions of Ukraine started escalating. Starting from the evening of February 18, protesters began occupying administrative buildings in the western regions of Ukraine. The objects attacked were public administration buildings, police departments and prosecution offices. By the evening of February 19, in five regions of Ukraine (Volynskaya, Ivano-Frankovskaya, Lvovskaya, Rovnenskaya, Ternopolskaya regions) the offices of the security forces were occupied. In Khmelnytsk, as the protesters were storming the building of the Security Service of Ukraine, they were met by a burst of gunfire. One woman received a head injury. As journalists report, she died in the hospital.

The international community has already given its opinion on the events in Ukraine. In particular, Jose Manuel Barroso, the president of the European Commission, called upon the governments of the EC countries to immediately impose targeted sanctions against those responsible for the bloodshed in Ukraine. Geoffrey R. Pyatt, the United States Ambassador to Ukraine, considers that it is Viktor Yanukovich who is personally responsible for the course of events in Ukraine. Dmitri Peskov, the presidential spokesperson of Russia, said, in his turn, that the official Moscow understands the situation as a coup attempt. During the night between February 18 and February 19 ambassadors of European states and Angela Merkel, the Chancellor of Germany, were trying to reach Viktor Yanukovich on the phone but none of them succeeded. It is known, however, that the president of Ukraine had a phone talk with Vladimir Putin.

Taking into account the fact that the full power is concentrated in the hands of Viktor Yanukovich and his surroundings, the Open Dialog Foundation considers it is the authorities of Ukraine that are fully responsible for the development of the conflict. Violent actions are taken on both sides of the conflict but the responsibility for their escalation rests on the security forces. Many of the protesters killed have firearm injuries. The authorities are commiting crimes which can be regarded as crimes against humanity. The security forces have become a tool of repression of citizens for their political views.

The authorities of Ukraine have by their constant ignoring of the protesters’ demands and by their attempts to oppress the protest by force provoked numerous casualties and brought the country on the verge of political, economical and humanitarian collapse.  Yanukovich crossed the line when he ignored the calls of the EC and USA to compromise in order to solve the conflict peacefully. We call upon both sides to stop the escalation of violence in Kiev and the regions of Ukraine. We also call upon the international community to immediately apply all the international practice techniques to stop violence in Kiev.