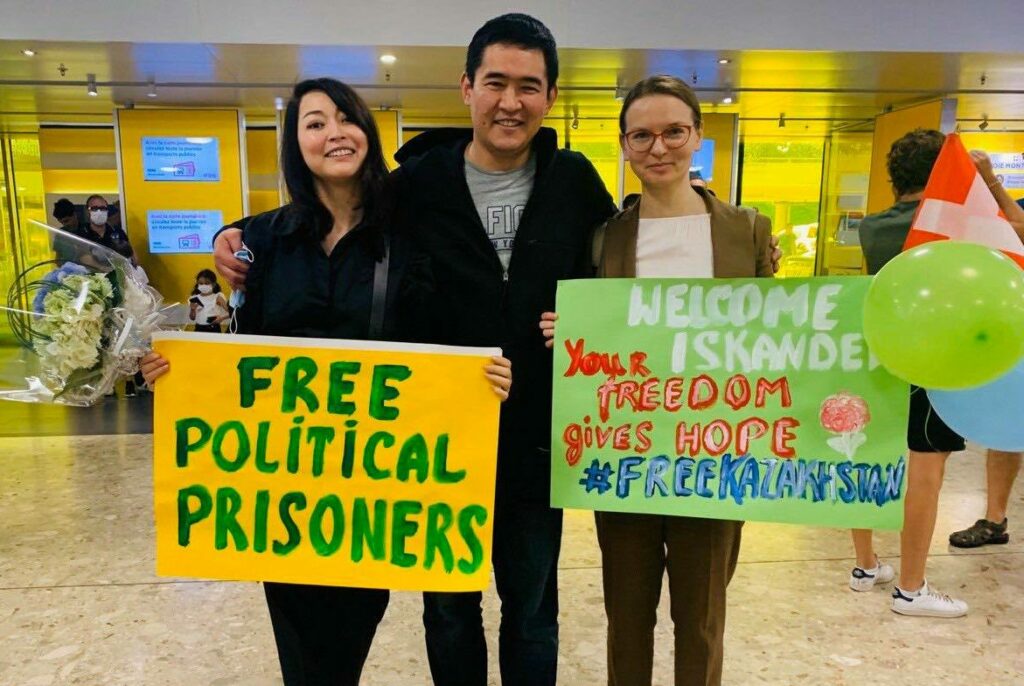 This morning, 4 July 2020, Iskander Yerimbetov, Kazakhstani political prisoner released on 30 December of last year, arrived at the Geneva Airport, Switzerland, after he was granted a humanitarian visa. ODF, the Italian Federation for Human Rights (FIDU) and his family warmly welcomed him at the airport, congratulating Iskander for this long-awaited day. This is a momentous event for his family and human rights advocates who tirelessly drew attention to Yerimbetov’s case during the three years he has been unlawfully imprisoned.

At the arrivals were present Lyudmyla Kozlovska and Paola Gaffurini of ODF, Antonio Stango of FIDU, who visited Yerimbetov in prison in 2018, and Bota Jardemalie, Yerimbetov’s sister and fierce advocate of her brother’s freedom.

Yerimbetov, who was arrested in November 2017 under politically motivated charges, thanked activists, politicians and human rights groups for their persevering efforts.

In a moment when Kazakhstan aspires to have an international agenda, egregious human rights violations and impunity continue unabated. His case confirms that mounting and constant international pressure on authoritarian governments can be life-saving for innocent people. Still, a dozen more Kazakhstani political prisoners remains in jail for expressing their dissent towards Nazarbayev’s authoritarianism. Political prisoners are now severely exposed to COVID-19 as no anti-pandemic measures were put in place in detention facilities.

Greeting his loved ones and human rights defenders, Yerimbetov said “I am happy to meet you all in person, I have heard about your brave work while in prison. It is important that every political prisoner is not forgotten”.

To briefly recall, Iskander Yerimbetov is a Kazakh businessman, brother of human rights lawyer and political refugee Bota Jardemalie. Yerimbetov was taken as a hostage in November 2017 and sentenced in 2018 to 7 years’ imprisonment under false charges of ‘fraud’ in retaliation for the human rights work of his sister. Along with Yerimbetov, two of his business colleagues Dmitriy Pestov and Vasilina Sokolenko were convicted to long-prison terms and released earlier this year.

In detention facility, Yerimbetov was severely tortured and ill-treated. For one year, Yerimbetov was placed in solitary confinement and, later, moved to the correctional colony LA 155/14 in Zarechny (near Almaty), Kazakhstan’s hellish torture prison.  At the end of 2019, he was released due to life-threatening illness, direct result of prolonged inhuman treatment and beatings in prison. In the event that his health would improve, the authorities established that he can be re-imprisoned.

Yerimbetov’s case triggered harsh reactions among the international community. Fellow human rights NGOs, in primis ODF, the Norwegian Helsinki Committee, the Italian Federation for Human Rights, Human Rights Watch, CCBE, Ar-Rukh-Hak, and Kazakhstan International Bureau for Human Rights and Rule of Law, immediately declared the political nature of the verdict and demanded the Kazakh authorities to stop Yerimbetov’s torture and urgently release him. Moreover, the subjectivity of his arrest and detention was highlighted by the UN Working Group on Arbitrary Detention in 2018, and the call for his release was supported by the European Parliament in its resolution on human rights situation in Kazakhstan dated 14 March 2019.

Additionally, 17 U.S. Senators called on President Tokayev to investigate the torture allegations and take appropriate measures towards the ones responsible.

Still, Kazahstan hasn’t implemented all the recommendations of the UN WGAD and the EP demanding to: conduct an independent investigation of the circumstances of Yerimbetov’s arbitrary deprivation of liberty; bring to justice Yerimbetov’s jailers and provide a compensation for his illegal imprisonment. At present, he still suffers from the detrimental consequences of torture.

His freedom is a sign of hope for all political prisoners in Kazakhstan! We will continue our work to make sure that every prisoner will be free soon.

Read our reports and statements: