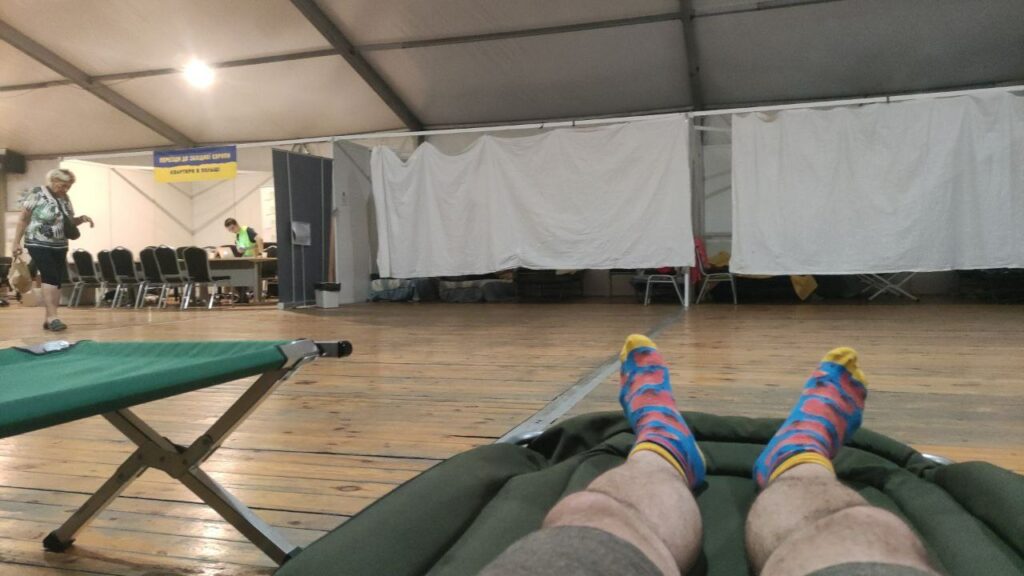 A day in the life of an ODF volunteer. “Five minutes of sleep, plenty of satisfaction and memories”

If you wonder what the work of an ODF volunteer supporting refugees looks like, you should read this post by our foundation colleague Dominik Berlinski, who, in addition to his duties as coordinator, selflessly helps others after his working hours:

“On Saturday, from 4:30 P.M., I helped with a transport around Warsaw. First, shopping for one of the wards at the Airbnb property, then transporting a family of three to an Airbnb flat on Lwowska Street for the night. Then picking up a parcel from Bemowo to Przemysl for later transport to Ukraine and collecting fuel vouchers donated by PAH from the ODF warehouse and a little rest at the train station.

At 11:55 P.M., I picked up two passengers (Valentyna with her daughter Olena) and their cat from Ząbkowska Street and we headed to Tesco in Przemysl. On the way, near Celestynow (around 00:30 A.M. on Sunday) we had a load of more donations for the military – shaving foams, washing powders, electric kettles, a big pot, dumpling boards, lots of crockery and cutlery, etc.

We are in Przemyśl at 4:45 A.M. Around 6:00 A.M., Valentyna with Olena and the kitten get on a bus to Norway, and I go to the crossing in Medyka to leave the package from Bemowo.
The next stage is a drive to HOSiR in Hrebenne, where I leave aid for the Ukrainian soldiers and then pick up:

Around noon I take a 30-minute break with a 5-minute nap in the car park. Two hours later, we are at the Warszawa Wschodnia train station to ask about the details of departure of some of the people, and we travel to Minsk, where the team going to Norway has been given accommodation as part of the ODF/Airbnb collaboration. Kateryna is getting a separate room on Marszalkowska Street.

The next stop is the Warszawa Zachodnia bus station, where the ladies going to Germany and Italy buy their tickets (it turns out that they will be going on the same bus 😊), and the ladies who are going to work in Poland take care of their formalities and exchange money.

Then I take all four of them to my home for dinner and an overnight stay. I finish my shift of more than twenty-four hours around 9:00 P.M. with the following achievements:

As you can see, volunteer work is not easy, but the efforts are rewarded by the satisfaction and pride in the tasks! The ODF already has dozens of volunteers in various divisions, including refugee-social, military-supply and communications. If you want to join our fantastic team – APPLY! We’ll take care of the rest 😊