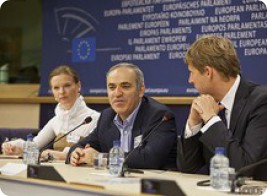 On the eve of the parliamentary elections in Russia, Garri Kasparov, the head of the United Civil Front and one of the leaders of anti-Kremlin opposition, is going to pay a visit to the European Parliament on November 8 at the invitation of the parliamentary group – European Conservatists and Reformists (ECR). He will take part in a press conference and in a number of meetings with the members of the EP.

The election commission refused to register major opposition parties for the parliamentary elections which are to be held in Russia on 4 December 2011. By this decision, these parties were excluded from standing for the elections to the Duma as well as from running a joint candidate for the presidential elections scheduled for 4 March 2012.

Garri Kasparov’s pessimistic words turned out to be prophetic: “It’s an illusion and pretence that Russia is going to hold any elections (..) one cannot fight against Putin through free elections – it is because he is never going to allow any free elections”.

The agenda starts at 12.00 o’clock with a press conference and a simultaneous chess game: G.Kasparow versus the members of the EP. From 4.00 p.m. to 5.00 p.m., the guests are going to take part in the meeting of The European Conservatists and Reformists Group (ASP Room A5E2). Then, from 5.00 p.m. there will be an open meeting with the members of the European Parliament (Room A1H1).

More on this topic:
Garry Kasparov