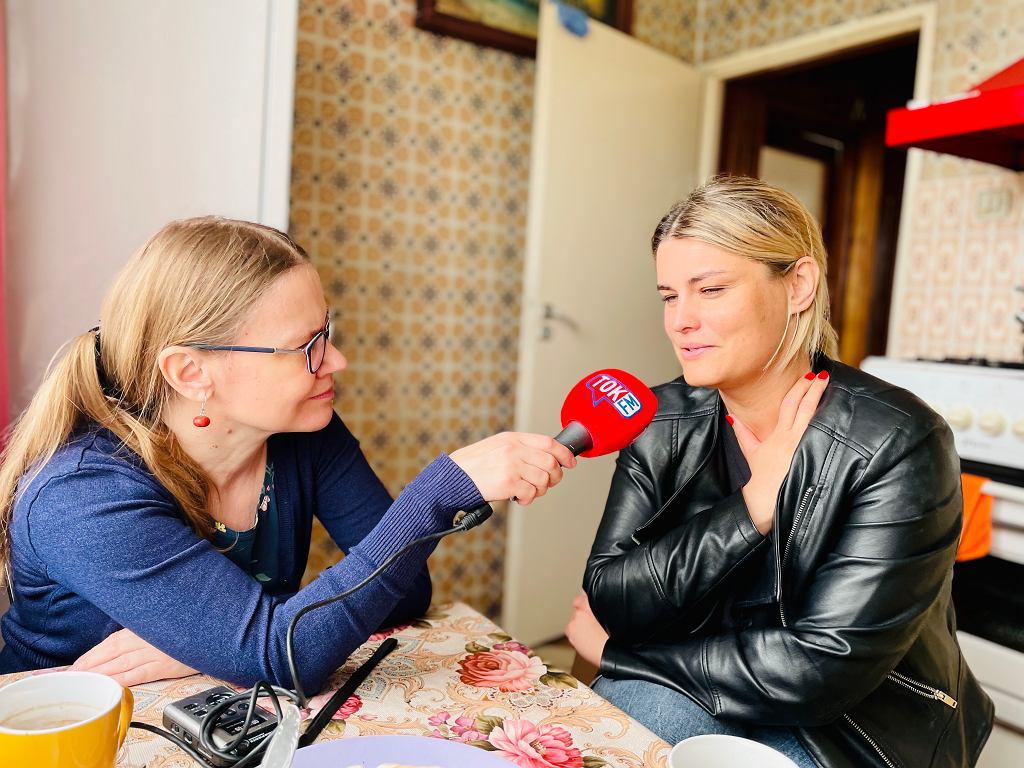 In a house near Warsaw the refugee women found the peace they craved. “We have everything here”

The Open Dialogue Foundation has created the House for Independent Mothers near Warsaw. This is the first place of its kind in Poland. It was created by, among others, Agata Dziopa, a volunteer helping refugees at the Warsaw train station. A single-family house in the countryside is inhabited by Ukrainian women with children. More than 20 people in total.

The House for Independent Mothers was built in a rented single-family house in the small village of Jakubowizna – an hour’s drive from Warsaw. Lots of greenery, peace and quiet all around. According to the house’s co-owner Piotr Kuśmider, the grandparents’ house was being prepared for employees of local companies. “But war broke out and everything changed. We decided to help women who, together with their children, found themselves in a dramatic situation,” he states.

The house has three floors, with a bathroom, kitchen and rooms on each floor. Two floors are already occupied by mothers with children, the third floor is currently being renovated, as more families are already queuing to move in.

Ms Natalia moved into the House two months ago, together with her 13-year-old daughter Nastka. Her grandmother – Ms Natalia’s mother – also came to Poland with them, but after a short stay she decided to return home. “She could not be persuaded to stay. She missed a lot,” we hear.

Women left Kharkiv in the dark – they did not know where they would end up. Initially volunteers placed them in the Expo Hall in Warsaw. In a crowd of other people, they waited to see what would happen next. There they met Agata Dziopa, the originator of the Houses for Independent Mothers. She was the one who helped them.

The idea is that the House for Independent Mothers is intended to be a permanent place to stay – not for a month or two, but for longer. For as much as will be needed. The project is implemented by the Open Dialogue Foundation. “The ladies who live here do not pay for anything. We pay the rent, the utilities. We also pay for purchases,” says Agata Dziopa.

Ukrainian women do their shopping themselves, so that they become independent, have contact with the Polish language and decide for themselves. More than 20 people live at the House, including a young girl who gave birth to a baby girl three weeks ago, already in Poland.

Natalia says the place allows mothers to get back on their feet. “Really, we have everything here,” he stresses. “We help each other, we can rely on each other,” she adds. Asked if she will return to Kharkiv, she says she does not know. “My daughter goes to school, speaks increasingly good Polish and has friends here. She is already looking forward to 1 September to return to school after the summer holidays. The most important thing is that we are safe here,” enthuses Nastka’s mother.

The teenager is a cheerful, smiling girl who, as she says, feels very comfortable in Poland. She is also in contact with her classmates in Kharkiv. “As far as we know, they say things have calmed down in Kharkiv now. But I don’t know if I want to go back, my mother doesn’t know either. There is war there and here we have peace. Although we miss home, of course,” the girl admits.

Natalia stresses that the most important thing for her now is to find a job. For two weeks she commuted to Warsaw, to one of the renowned hotels. She worked as a maid. “It was hard, working 8-9 hours a day,” she says. The pay was low – PLN 400 per week of work. She resigned. Today she works in the village – helping out at a local bistro. But she is also looking for other activities all the time.

The House for Independent Mothers is a place where women with children can count on support, including psychological help. Vecheslav Konotopchyk, a psychologist from Kyiv, works with the children. In his own words, he provides therapy through play. We have the opportunity to participate in one activity to defuse emotions. First, there is the shouting into the pillow. The children shout as loud as they can. “Why so quiet?” the psychologist laughs. We can see that they understand each other very well.

In a large bowl the starch is dissolved, the flour added, and a dough is formed. Each child can knead, mould figures or dumplings. At the same time, discussions are going on all the time, about everything. The same goes for hand-painting classes. “Recently they have been painting their family, their home. One of the boys drew blood, a lot of blood,” says Slava. It is a signal for him that the topic needs to be worked through further with this particular child. “The most important thing is that the children feel a foothold in me, a help. They need to feel that they are in a safe place, among good people, that nothing is threatening them. The most important thing is the here and now. Safety and peace of mind,” says the psychologist.

He is at the House regularly, once or twice a week, commuting here from Warsaw. Importantly, he himself is Ukrainian, coming from Kyiv, where he worked as a psychologist and therapist. The fact that he speaks to the children in their language is also extremely important to them.

Alina, 29, arrived in Poland on 6 March, together with her 6-year-old daughter Polina. They had travelled by train for more than 24 hours and did not even have water with them. “We didn’t know what awaited us here. We arrived at Warszawa Zachodnia Station and from there volunteers directed us to the Expo Hall. There was a crowd of people there, there was nothing to breathe. The daughter cried, wanted to eat, to sleep. It was hard,” says Alina.

They spent five days at the Expo Hall. “One of my friends read about Agata on Facebook and contacted her. Agata called me and we arranged for her to take me to this House for Independent Mothers. In the meantime, thieves appeared in the hall, we started to get scared,” recalls the Ukrainian.

Ms Alina put her trust in Agata. “I didn’t know where we were going, but I felt it would be a good place. And so it is,” she says. She emphasises that her daughter has revived, goes to kindergarten and is happy. “We planted a lot of plants here by the house: tomatoes, cucumbers, parsley, onions. But, most importantly, I feel safe here. Very safe,” the Ukrainian woman tells us. By her own admission, the war found her at a very difficult time in her life, just after she had separated from her husband.

“In Ukraine, my parents stayed behind. I am helpless that I have no way to help them. The only thing I could do was send a food parcel. Almost 20 kilograms,” she says. “The package was arriving three weeks. But it arrived, the parents were very happy. Because there is a shortage of everything locally, on top of which everything has become up to five times more expensive,” adds our interviewee.

Alina cooks a lot, she enjoys doing it. We were greeted by a heap of pancakes. “The children like pancakes, plus our Ukrainian syrniki, pierogi. I cook, I get up every day at 6am and I’m in the kitchen,” she says. In Ukraine, she worked in a kindergarten, including work with children on the autism spectrum. In Poland, she is working in a local bistro and in a pizzeria for the time being, but she is also still looking for other work.

Svetlana from the Dnipropetrovsk region

Svetlana, a bank employee, decided to leave Ukraine late, on 6 April. As she says, she had been gathering for this for several weeks. She had her suitcase ready, but every day she would say to herself “one more day, two more days”. “I saw my 14-year-old daughter take it very hard. She couldn’t sleep, she was restless. She started asking me to leave. She said she was scared, that it was scary,” says Svetlana.

They have seen a lot, she says. Rockets flew over their heads and hit one of the nearby houses. The family spent several hours at a time in the basement almost every day, taking shelter from explosions. “We were in contact with friends in Poland. We knew where to go, although of course nothing was 100 percent certain. We weren’t sure if anyone would accept us or not,” she says.

As she says, she now feels calm and safe. “I also see peace in my daughter, although for the moment she does not want to go to a Polish school, she is only learning online. For me, the most important thing is her wellbeing,” adds Svetlana. She admits that she would like to stay in Poland permanently. She wants to become independent, find a good job, a place to live. “I think there will be some prospects here,” she says.

As Katarzyna Szczypska of the Open Dialogue Foundation tells us, the foundation wants to raise one million zlotys to create more Houses like the one near Warsaw. Every penny counts, anyone can join the collection.

The campaign is entitled “It could have been me” – participants include Magdalena Boczarska, Anna Dereszowska, Natalia Przybysz or Barbara Kurdej-Szatan.