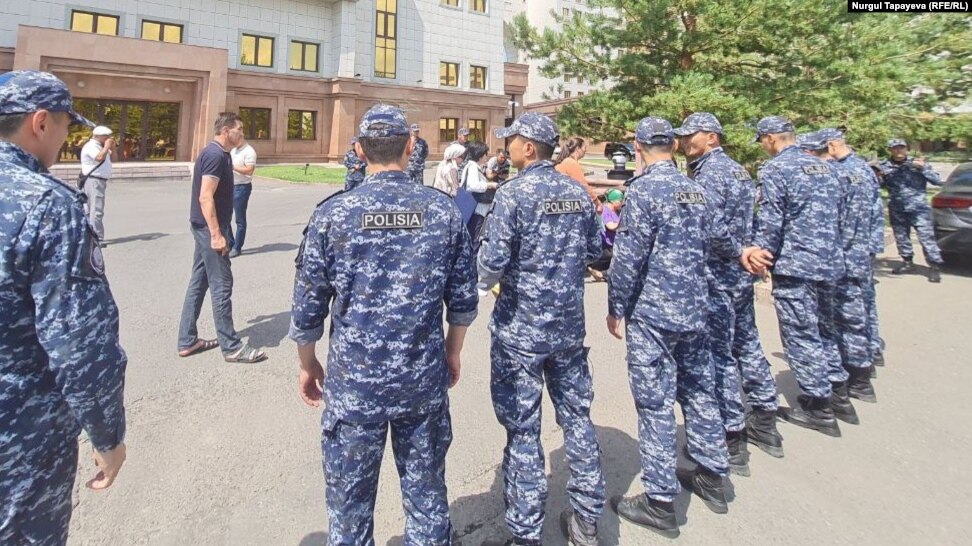 Kazakhstan: Persecution of relatives of victims of mass shootings and torture for demanding a fair investigation

After the tragic January events, the Kazakhstani authorities publicly refused to ensure an international investigation into the matter and said they would conduct an objective and full investigation themselves.

However, further events have shown that the investigation by Kazakhstan’s law enforcement agencies amounts to shifting the blame onto peaceful protesters and civilians who were on the streets during the protests. Those killed during the January events are posthumously accused of serious crimes, while those who, under torture, admitted their guilt and perjured themselves are sentenced to actual prison terms. At the same time, crimes committed by law enforcement officers and the army are not properly investigated.

Having lost hope for an objective investigation, relatives of torture victims and those killed have tried to draw attention to their problems and have staged protests. In response, the authorities have started pressuring and persecuting them.

On 11 July 2022 relatives of victims of the January events came to Nur-Sultan from various cities in Kazakhstan (Almaty, Semey, Ust-Kamenogorsk, Kyzylorda, Taraz) to hold a protest in front of the Presidential residence building. They demanded the acquittal of their dead loved ones who had been posthumously accused of various crimes. They also demanded an objective investigation into the January events. Police officers approached the protesters and suggested that they go to the General Prosecutor’s Office to express their complaints about the investigation. They had allegedly been appointed a meeting with representatives of the Presidential residence and the General Prosecutor’s Office, but the meeting did not take place that day. In fact, the protesters were simply ignored.

The protest took place against the backdrop of an official visit to Kazakhstan by the EU Special Representative for Central Asia, Terhi Hakala. It is known from public information that Terhi Hakala took part in several meetings with representatives of Kazakhstani business and authorities. According to information from the Kazakhstani human rights defenders, who are working to gather information on mass shootings and torture, as well as relatives of victims of mass shootings, Ambassador Hakala has not demonstrated any willingness to meet with them as well.  We believe that this discriminatory approach by Representative Terhi Hakala exacerbates the already dire human rights situation in Kazakhstan.

Demanding a meeting with the president, relatives of the victims of the January events spent several nights outside the Presidential residence building. Among the protesters was a woman, Aigerim Niyazbayeva, with her four-month-old baby. Her husband, Kairat Niyazbayev, was killed during the January events after President Tokayev gave the order “to shoot to kill without warning”. According to his wife, on 5 January 2022 Kairat Niyazbayev went outside to see what was happening and was shot dead. The authorities for no reason listed Kairat, as well as many other peaceful protesters, as those allegedly involved in “mass disorder”. In this way, the authorities fabricate “justification” for their rhetoric about alleged “looters” and “20,000 terrorists” during mass peaceful protests in January 2022. The family of the deceased, with 3 underage children, received no explanation as to why the shooting took place, no assistance or compensation from the state. Now Aigerim Niyazbayeva is trying to get her husband’s killers found and brought to justice. However, investigations into cases similar to this one are stalled. One more participant of the rally, Shapagat Kadyrova, whose husband was also killed in the January events and who is now raising three children by herself, was threatened by Almaty Akimat (local executive body) representatives that she would not receive any help if she went to Nur-Sultan to protest.

According to the General Prosecutor’s Office of Kazakhstan, as of the end of June 2022, more than a thousand people have the status of suspects in cases related to the January events. 514 of them are in detention. A total of 392 criminal cases were sent to court, in which 445 people have already been convicted.

It is noteworthy that the efforts of the investigative authorities are directed against peaceful protesters, while criminal actions by law enforcement agencies and the army are not properly investigated.

During the January events, officers of the Ministry of Internal Affairs, the Prosecutor’s Office and the National Security Committee used mass torture against peaceful protesters and civilians in police stations and pre-trial detention facilities. The victims of torture were thus forced to incriminate themselves and “confess” to being guilty of “terrorism” or “participation in mass disorder”. The authorities initially reported that at least 8 of the 238 people killed during the January events died as a result of torture after being detained. However, later the reports of six victims of torture began to emerge, which may indicate an attempt to deliberately underreport the number of deaths.

The Kazakhstani authorities deny sabotaging the investigation into mass torture. The head of the Anti-Corruption Agency, Olzhas Bektenov, during a meeting with EU representatives, said that the investigation into allegations of torture had allegedly already been completed in 171 cases. Another 177 cases are still under investigation. However, as of 18 July 2022, not a single member of the law enforcement agencies had been effectively prosecuted in connection with torture complaints.

On the contrary, the authorities impose real prison sentences on those who have been forced under torture to confess to their alleged “crimes”. On 11 July 2022 the Almaly District Court in Almaty sentenced Alibek Imanbekov to six years in prison. Imanbekov picked up weapons in the street during mass peaceful protests in January 2022 in order to hand them over to the police. However, as the police were not taking calls on those days, he decided to hand over the weapons to the police at the first opportunity, but was detained. According to eyewitnesses, in particular the director of the gun shop, the weapon Imanbekov found was not suitable for use. In court, Imanbekov stated that he did not admit his guilt and that he had been forced to confess under torture. However, the judge refused to consider the allegation of torture because Imanbekov “did not show a video/photo of exactly how he was tortured”. Employees at the pre-trial detention facility where Imanbekov was being held refused to provide a video for the period of his arrest. Alibek Imanbekov’s wife has a disability and they are raising two minor children together.

The Kazakhstani authorities have committed themselves to an objective and full investigation into the January events. However, in reality, they have launched a large-scale crackdown on peaceful protesters, civilians arrested during the protests, and human rights defenders and journalists who have documented human rights violations and violations of the right to peaceful assembly. The authorities have been speeding up trials, which have resulted in the sentencing of peaceful protesters to restriction of liberty or imprisonment for years on trumped-up charges within a month without ensuring the right to a fair trial. As of 18 July 2022, there were at least 140 political prisoners in Kazakhstan. 128 of them joined the list of political prisoners after the January events. The number of politically motivated criminal cases has increased from at least 48 to 232 since the start of the January protests.

The coalition of Kazakhstani human rights organisations #ActivistsNotExtremists considers the silencing of mass repression in Kazakhstan during the official visit to the country by the EU Special Representative for Central Asia, Terhi Hakala, extremely unacceptable. We call on the European External Action Service to follow up on the recommendations contained in the European Parliament Resolution on the situation in Kazakhstan dated 20 January 2022, in order to bring an end to the widespread political repression and crimes against human rights in Kazakhstan. In particular, we consider it necessary to impose personal sanctions against high-ranking Kazakh officials who have failed to allow an international investigation into the mass shootings and torture of civilians in Kazakhstan.