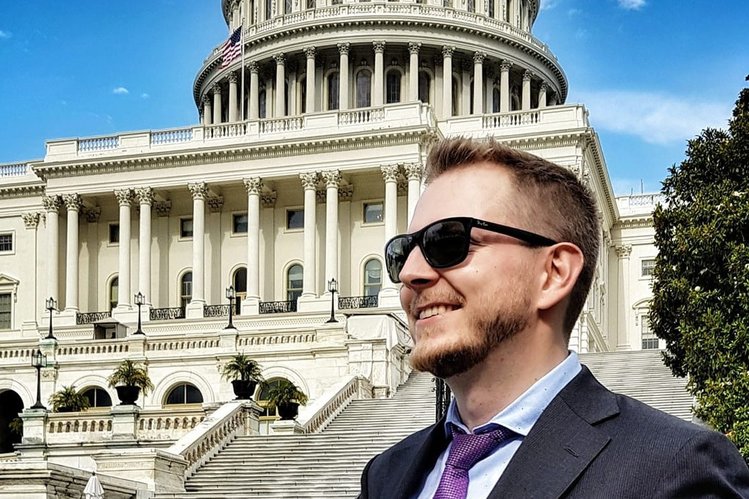 Why do I “snitch” abroad and the right cannot stand it? Let’s remember, Law and Justice does not equal Poland

Last week – not for the first time, and probably not the last – I have been met by a wave of hatred from the right-wing community. All because we decided, together with the delegation of the Open Dialogue Foundation, to hold a series of meetings in Washington, which, by accident, overlapped with the visit of President Duda.

The purpose of the meetings was to inform American decision-makers about the current state of the rule of law (especially of respecting civil liberties) in Poland. Judging by the perception of Internet users, the action was met with approval – in an online poll by Polityczek, our actions were supported by 800 people and only 15 were against them.

Surprisingly, one of my tweets has been widely shared, especially on the pro-regime side.

Pro-government media eagerly picked up the subject, and right-wing commentators such as Dawid Wildstein and Jacek Piekara explicitly alleged that my visit proved my connections with intelligence services of Russia and Germany (very curious to see what this common interest would look like). “Targowica Confederation lives and prospers” – commented Rafał Ziemkiewicz.

However, Aleksandra Jakubowska was the one who took the lead, both in social media and in the press. The deceitful accusations by a former member of the Polish United Workers’ Party Central Committee (PZPR), who was convicted of corruption, and Democratic Left Alliance (SLD) politician, who now rebranded herself as a right-wing star, made me believe even more that I am doing the right thing. If such a disgraced and mercurial person, as of recently Law and Justice’s propagandist, takes me – someone without much impact – in her crosshairs, it means that I did something right.

In fact, I was just doing my job which I’ve been doing for many years quite effectively (specifically, since Committee for the Defence of Democracy was founded), i. e. I was using my position in Brussels (as well as other foreign contacts) in order to inform the world about the actions of the Polish ruling party and to warn everyone against a similar scenario. My spontaneous, controversially titled “Survival Guide to Authoritarianism” has received 3 million views in the first month, was translated into several languages such as Turkish and Filipino and served as inspiration for a web series.

Ms. Jakubowska started her tirade with a commentary which perfectly illustrates her misunderstanding of the situation (or deliberate manipulation – after all, we are talking about a representative of the communist “Dziennik Telewizyjny”). She described my visit to the States as “snitching on our nation“, alluding to connections with foreign intelligence services.

It’s hard to say if she meant Moscow, Berlin or Soros and it’s probably not important anyway. More important is that if someone talks negatively about Poland it has to mean that some secret, external force had paid him/her for doing it. I guess the same secret force “sponsored me” to become a part of the Committee for the Defence of Democracy (for which I left my previous job), later while working at “Wyborcza”, and now – obviously – at the Open Dialogue Foundation.

I have outlined Jakubowska’s ignorance and manipulation (like that of hundreds of trolls who spit unrepeatable insults at me as massively as they’re being removed by Twitter administrators) in just four words “Law and Justice is not the nation”.

Here’s the rub! Right-wing propagandists are trying to equate the ruling party with the nation in our minds at all costs. It’s hardly surprising when done by a communist journalist, but one could be amazed how popular this communist narrative is among the entire right-wing community – the same one that defends football hooligans chanting “once with a sickle, once with a hammer”.

Well, ladies and gentlemen, I may surprise you, but the Law and Justice party is not the country, nor the nation, nor Poland,nor the sovereign. It is a party which, although democratically elected, will pass away just like that previous one (translator’s note: Polish United Workers’ Party), that had been limiting our freedom and democracy for years. Therefore, I ended my little “Guide” with the following words: “Remember that every authoritarian, totalitarian and fascist regime in history eventually failed, thanks to the people”, emphasizing that one stands in opposition to another and they are not equal.

When I came to the US, I had a great pleasure to meet representatives of the State Department, several congress offices and senators, the Helsinki Commission as well as leading think tanks, sharing with them a set of the latest reports by Polish and foreign NGOs such as Amnesty, Human Rights Watch and Stefan Batory Foundation. I did not “snitch on the state” but defended it against a harmful force.

In conditions to which, of course, I have no right to even compare myself, but such role models like Jan Nowak-Jeziorański, journalists from Radio Free Europe and Union of Polish Journalists did it with similar motivation and determination years ago. They knew that if our Western neighbours (today’s allies) are more aware of the situation in the country Polish authorities will think twice before directing the party apparatus against civil society. And just as then our patriotic duty was to defend “Solidarity” dissidents, today it is to defend persecuted judges, Elżbieta Podleśna or Lyudmyla Kozlovska.

However you view the activities of the latter, Law and Justice made sure they deserved to be treated as persons persecuted by Polish authorities. “She can speak abroad as a victim of Polish government’s repression. And she has every right to do so”, – wrote Bartosz Wieliński about Kozlovska in “Wyborcza”.

Therefore, instead of duplicating the propaganda methods of the Polish People’s Republic, it is worth asking what could be a person’s motivation to “snitch on the state”, represent a “modern Targowica “, with the extreme right-wing wanting to lynch you or hang on the gallows – as was done symbolically to opposition MEPs (I’ve received dozens of threats like that myself too). Ask yourself also who gains and who loses as a result.

Without any doubts, those who shout loudest (the supporters of the ruling party), who still believe that in the Internet era the world will never know about the actions of their leaders,, are the ones with the most to lose. Think for example of the case of the “rainbow Madonna” (translator’s note: a 51-year-old woman had been arrested over images of the Virgin Mary with a rainbow-coloured halo) or the deportation of Kozlovska – both reported on by the world’s largest publications from Great Britain to the USA.

The repressions against the judiciary in Poland are reported – probably on a regular basis these days – by the world’s leading organisations defending democracy and the rule of law. My role is practically to paste a link on Twitter or print a document available on the Internet and hand it to the right person in the Capitol, saving him/her several minutes of “googling”.

Those who gain are citizens, it’s Poland itself, gaining freedom and democracy, which unfortunately must be guarded by our western friends (as was recently done e.g. by the Court of Justice of the European Union). The benefactor is my 18-year-old brother who is just starting his studies in Poland and wishes to graduate them in a free country. He is my “secret puppet master”, not Putin, Merkel or Soros.

So, Ms. Jakubowska and your comrades, you can yourself answer the question if my motivation to “snitch” really qualifies for the gallows.