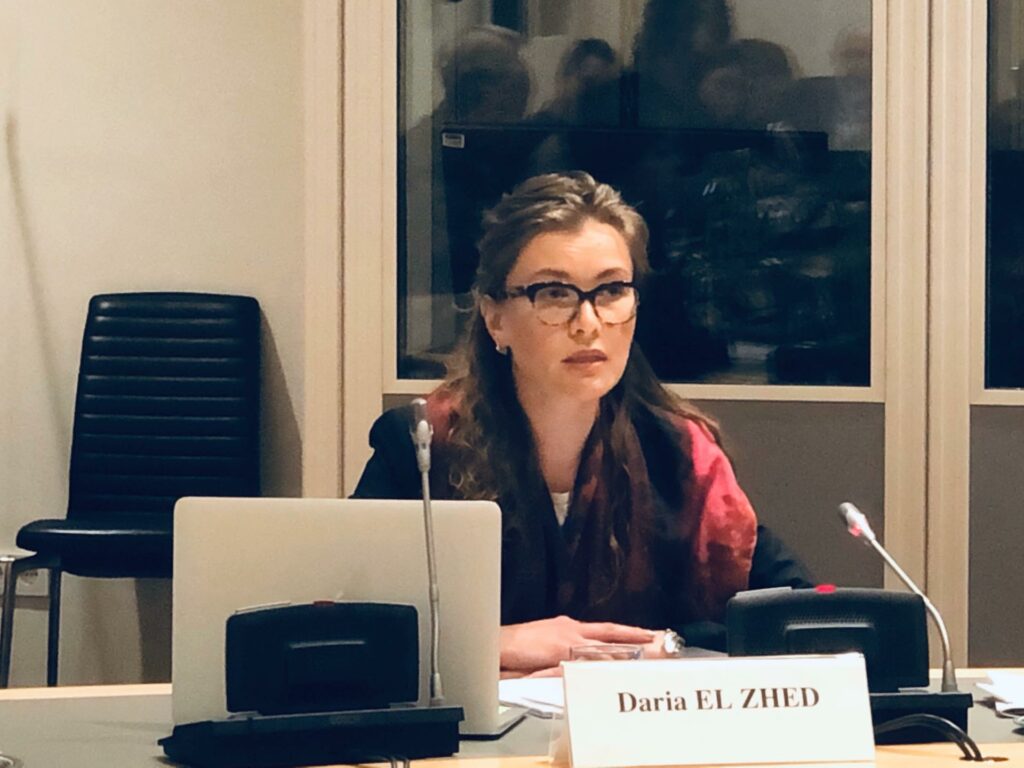 Pressure on the “Open Russia” activist

Daria El Zhed is a citizen of Russia, a lawyer and a psychologist. She was an active member of the Open Russia opposition movement established in December 2001.

From January to August 2017, Daria El Zhed was a consultant and a trainer in educational projects of Open Russia, a Russian public organization. In particular, within the framework of the Open Elections project, she conducted trainings for candidates in municipal elections (the Moscow School of Candidates) under the “Debates” program. Later Daria El Zhed, as a politically persecuted Open Russia activist, participated in several meetings of the OSCE PA in Vienna.

In May 2015, President Vladimir Putin signed the law on “undesirable organizations”. On 26.04.2017, the Prosecutor General’s office of Russia added three foreign legal entities to the register of “undesirable organizations”: Otkrytaya Rossia, Open Russia Civic Movement (both UK-based) and the Institute of Modern Russia, Inc. (USA), headed by Khodorkovsky’s son Pavel. The Prosecutor’s office stated that the activities of these organizations are aimed at “discrediting the elections taking place in Russia”, “inspiring protest actions” and “destabilizing the domestic political situation”. The law on “undesirable foreign organizations” was signed by President Vladimir Putin in May 2015.

The Prosecutor General’s office stressed that its decision concerns exclusively foreign legal entities, and this “will not affect” the work of Open Russia, a Russian public network movement. However, in December 2017, Roskomnadzor (The Federal Service for Supervision of Communications, Information Technology, and Mass Media) actually added the website of the Open Russia movement to the register of prohibited websites. Other websites that it made inaccessible included the Open Elections and Open University projects, and khodorkovsky.ru. Thus, another wave of persecution started against activists and members of Open Russia.

According to Daria El Zhed, in 2018 she began to receive threats from representatives of authorities, who demanded that she abandon her activities in Open Russia. In June 2018, Daria El Zhed left Russia. According to her, later, in France and the UAE, she was illegally followed by Russian special services. In August 2018, Russian law enforcement agencies, before any charges were brought against Daria El Zhed, abused the legal aid mechanisms and requested information about her location, property, and accounts.

This violated her right to privacy, freedom of movement and right to protection. In addition, on 20.08.2018, the General Directorate of the Ministry of Internal Affairs of Russia reported that Daria El Zhed was included in the list of citizens whose entry to the territory of France is prohibited. Law enforcement agencies put pressure on her mother, who lives in Russia, demanding her to insist that her daughter returns to the country.

On 13.03.2019 a determination was made in respect of Daria El Zhed, charging her under Article 159 of the Criminal Code (“Fraud”). The criminal case was initiated on 27.10.2017. The Russian investigation stated that in 2011, some “unidentified persons” from Progress LLC company provided false information to officials and illegally received a subsidy for an innovative project.

The criminal prosecution of Daria El Zhed is clearly of a political nature:

On 22.04.2019 Russia declared Daria El Zhed in the Interpol’s wanted list. Since 28.04.2019, Daria El Zhed has stayed in Austria, where she asked for political asylum. In October 2019, she was arrested in Austria based on Russia’s request to Interpol. She was soon released on bail.

Russia, like China, Turkey, and Kazakhstan, holds the record for abuse of the Interpol system and extradition procedures. Authoritarian states use those to prey on refugees and political opponents. Human rights defenders, as well as EU and PACE bodies, have been working on this issue for more than six years.

Russia sent several Interpol notifications (diffusions) to Austria concerning the case of Daria El Zhed, an Open Russia activist. Russia also used diffusion to pursue the founder of Open Russia, Mikhail Khodorkovsky, a former head of the YUKOS oil company. Russia accused him of a contract murder and sent out a diffusion against him on 11.02.2016. The next day, Interpol rejected the Russian request, recognizing it as politically motivated.

Over the past three years, several individuals that Russia has declared wanted in the Khodorkovsky case have been removed from the Interpol list, in particular, Pavel Zabelin, Leonid Nevzlin, Pavel Ivlev, and Ivan Kolesnikov. Russia was denied their extradition. A striking example of how Russia uses international search mechanisms is that it was seven times that Interpol rejected Russia’s request to search for William Browder, a British citizen and the leader of the campaign for justice in Sergei Magnitsky case. However, Russia sent a repeated request every time.

Daria El Zhed ‘s case is another example of the abuse of Interpol and extradition mechanisms by an authoritarian state. This, in particular, was discussed on 20.02.2020 at a hearing organized by the Open Dialogue Foundation in the framework of the OSCE PA in Vienna.

Inadmissibility of extradition due to the political nature of the prosecution, the serious threat of torture and unfair trial in Russia

The facts indicate that Daria El Zhed is being persecuted for her political beliefs and activities in the Open Russia opposition movement. The founder of this movement, Mikhail Khodorkovsky, is a personal opponent of President Vladimir Putin. Putin publicly accused Khodorkovsky of “having blood on his hands.” Daria El Zhed conducted trainings in an Open Russia project aimed at the preparation of independent candidates for elections. By persecuting Daria El Zhed and other Open Russia activists, the authorities are trying to intimidate anyone who supports this movement or participated in its projects.

In Russia, Daria El Zhed is at risk of torture and cruel treatment. The use of torture and violence in Russian pre-trial detention centers and colonies remains of a systemic nature. Russian law enforcement agencies and courts turn a blind eye to cases of beatings, torture and murder of prisoners. Open Dialogue Foundation covered the case of Vitaly Buntov, a Russian prisoner.  Having failed to achieve justice in Russia, Vitaly Buntov had to appeal to the European Court of Human Rights, which recognized the fact that Vitaly experienced cruel torture. After the ECHR decision, Buntov was subject to even more frequent beatings and inhuman treatment.