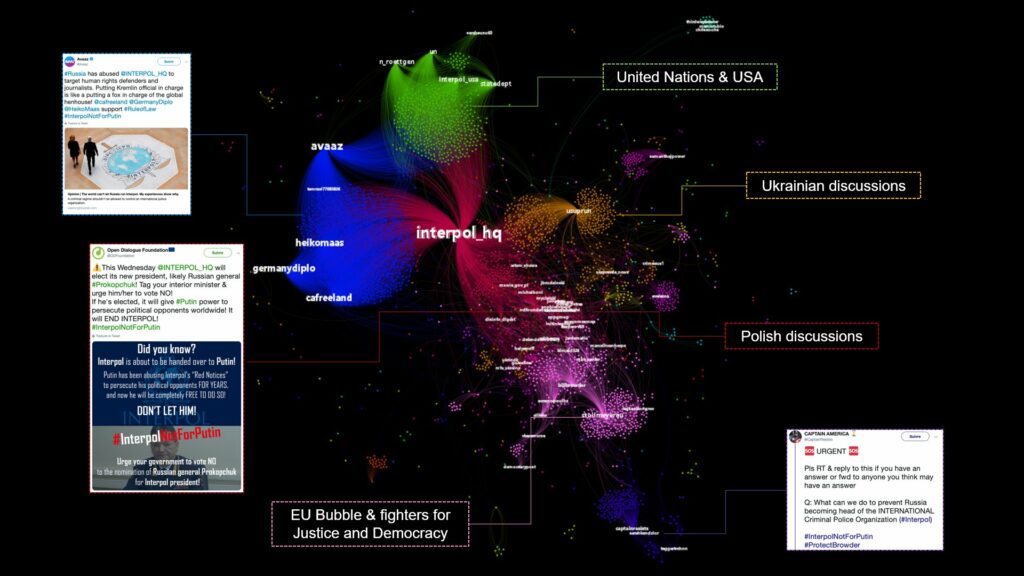 On 21 November 2018, at the 87th session of the General Assembly of INTERPOL, a new INTERPOL president was to be elected. According to the report of reputable mass media, the representative of the Russian Federation, Major General of Police, Vice-President of INTERPOL Oleksandr Prokopchuk had the greatest chances to be elected for this post.

In reply to the threat of a Russian representative taking charge of INTERPOL, ODF joined an open letter against the candidacy and ran an advocacy campaign with the help of MEPs and influencers, focused around the #InterpolNotForPutin hashtag. The hashtag quickly became viral, being used by numerous organisations supporting the cause, e.g. Avaaz and Disinfo Digest or influencers like Alice Stollmeyer (No 1 female EU influencer in the 2019 EUinfluencer ranking).

In just 4 days our hashtag was used by over 3 thousand users in over 4 thousand tweets, reaching a 19-million worldwide audience. At the end, due to international pressure, Russian Aleksandr Prokopchuk was not elected the new Interpol president.

ODF is among the initiators of the INTERPOL reform. For 5 years now it has been running a campaign for this cause as well as providing expertise for the institution. In its report “The reform of Interpol: Don’t let it be stopped halfway” it reviewed amendments to its legal basis as well as proposed a new mechanism aiding further reform. Our research was also a leading source for a recent report on INTERPOL by the European Parliament’s Human Rights Subcommittee.