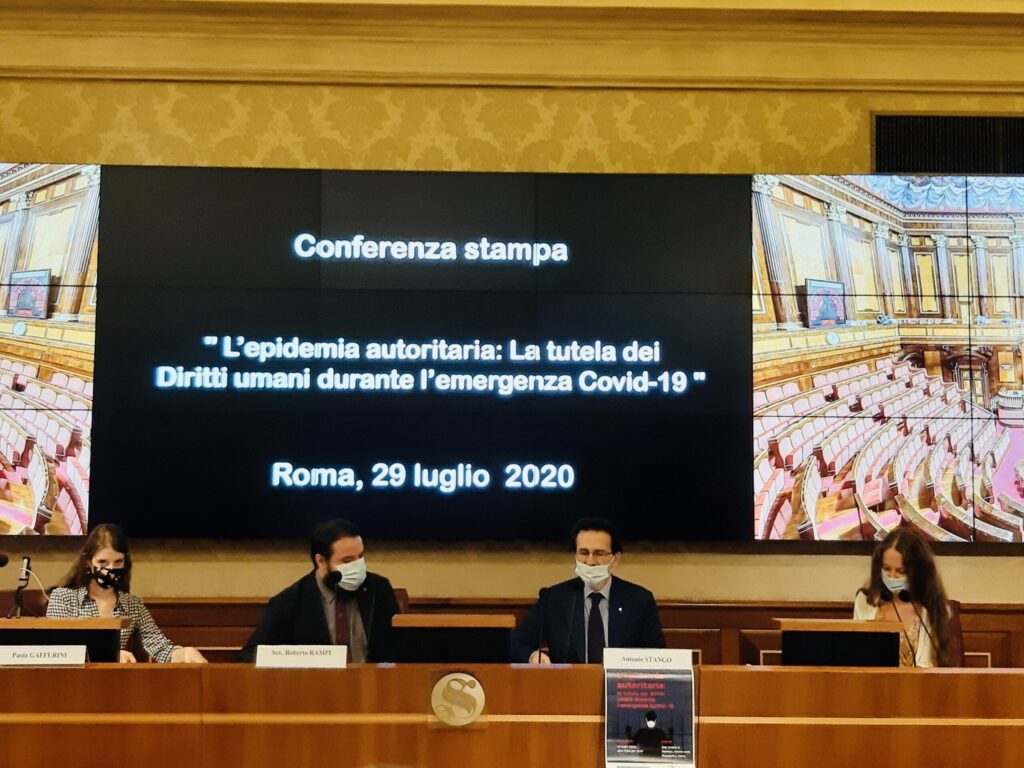 The Open Dialogue Foundation (ODF) and Federazione Italiana Diritti Umani (FIDU) are back on track after the lockdown with a real-life press conference “The Authoritarian Epidemic: Safeguarding Human Rights in Times of COVID-19”. The conference was held on 29 July 2020, at Sala Caduti di Nassirya of the Italian Senate, in Rome, Italy.

The event – an initiative of Italian Senator Roberto Rampi – was co-hosted by ODF and the Italian Federation for Human Rights and aimed at presenting the worrying findings and key recommendations contained in our joint report “The Toll of COVID-19 on Human Rights: Selected Countries and Territories”.

The panel was moderated by Antonio Stango, President of FIDU and one of the authors of the report. During his introductory remarks, he briefly outlined the scope of the report based on the contribution of activists and human rights defenders from Turkey, Ukraine, the Russian Federation, Moldova and Kazakhstan.

Speaking of the situation in Iran, Antonio reiterated the importance of keeping up the pressure on a country which has been severely hit by the pandemic but whose regime has been manipulating statistics and repressing dissenting voices since the very beginning of the outbreak. Moreover, he explained that the Iranian authorities partnered up with the Russian Federation and other “like-minded” states to lift sanctions at the UN General Assembly – a move which was harshly criticised by Ukrainian civil society organisations that pointed out the unlawful actions of Putin’s government in Crimea and Donbas.

Italian journalist Alessandra Fabbretti of Agenzia DIRE underlined the importance of gathering uncensored testimonies about the pandemic and the human rights violations related to it. Alessandra also gave an overview of the main challenges posed by COVID-19 in Turkey, highlighting the critical situation of overcrowded prisons and the arbitrary application of Erdogan’s new amnesty law towards journalists, lawyers and the regime’s critics.

During the panel discussion, Vice-President of FIDU, Eleonora Mongelli, presented a video message by 21 year-old Australian student and activist, Drew Pavlou. In a compelling statement, Drew directed the audience’s attention towards the heavy interference of the Chinese government in Australian academic institutions, including his university (Queensland University). The Brisbane-based university is indeed home to one of Australia’s many Confucius Institutes, funded by the Chinese government and known for being a Beijing propaganda vehicle. Drew was accused of misconduct and suspended from his university after he organised a peaceful sit-in in support of Hong Kong protesters and repressed ethnic minorities in China; specifically, he criticised the university’s dependence on Chinese funds, highlighting the complicit role of its Vice-Rector, Peter Høj, in promoting the Chinese communist party’s interests within the institution.

Paola Gaffurini, Advocacy Officer at ODF, explained how authoritarian states have abused the state of emergency to repress fundamental freedoms, including the freedom of expression. She referred to  the striking example of Kazakhstan, a country severely hit by the COVID-19 crisis which has blatantly manipulated the pandemic statistics, mismanaged international and national economic funds devoted to mitigate COVID-19 and arbitrarily detained 16,000 citizens for simply violating the quarantine regime. Paola also illustrated the dramatic repression of human rights defenders such Dana Zhanay, Altynay Tuksikova, Elena Semenova and Anna Shukeyeva, who have been punished for denouncing the poor sanitary conditions and incidents of torture in places of detention. Attempts to restrict media freedom in Moldova were also presented, as well as Vladimir Plahotniuc’s corrupt legacy in times of COVID-19.

Senator Roberto Rampi closed the panel by reiterating the urgent need to support and give greater space to civil society in international forums. He shared the recommendations of ODF and FIDU in regards to the importance of human rights conditionalities in bilateral agreements with authoritarian states and of international monitoring missions aimed at evaluating the countries’ compliance with their international obligations. Last but not least, he reiterated that the adoption of an Italian Magnitsky-like law remains an absolute priority in his agenda and urged the Senate to push a debate within the shortest possible time.

Among the attendants of the  event were policymakers, journalists, lawyers and organisations active in the field of human rights.

Watch the recording of the press conference by Radio Radicale: