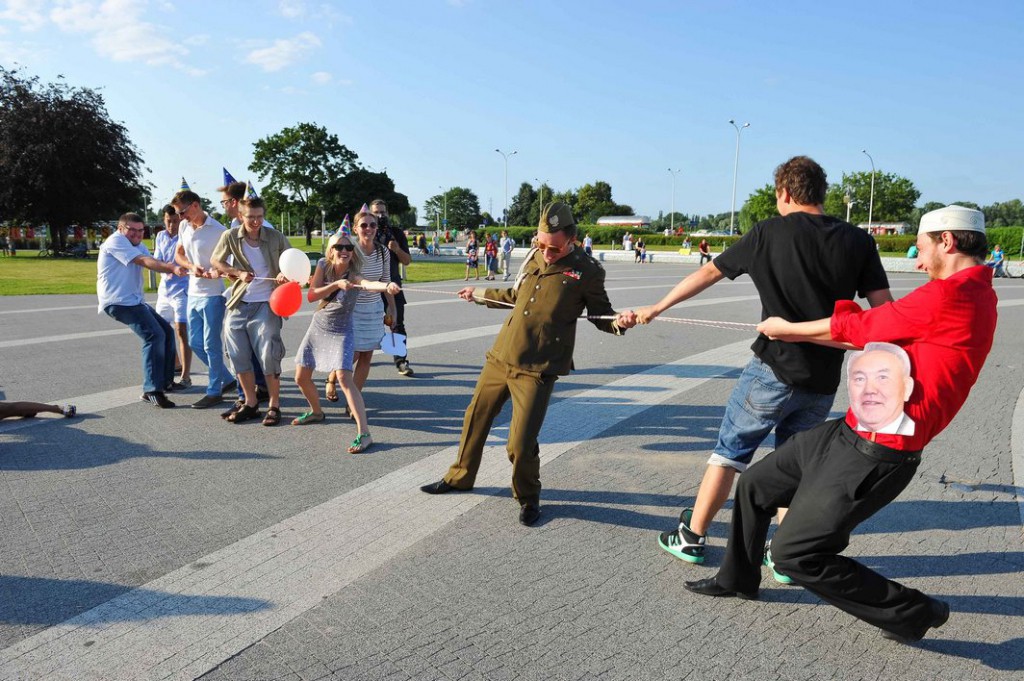 On 6 July, 2013, on the initiative of the Open Dialog Foundation, an unusual event associated with the defence of human rights and freedom of speech in Kazakhstan was held.

The event was took place on Saturday afternoon in the Multimedia Fountain Park in Warsaw under the title ‘The Feast of Dictators’. As 6 July is the birthday of both Nursultan Nazarbayev and Wojciech Jaruzelski, the Open Dialog Foundation decided to organise a birthday party for the dictators.

Thanks to an informative campaign, the public had a chance to obtain information about the internal situation in Kazakhstan and learn from the Kazakh journalist Zhanar Kassymbekova about the issues related to human rights violations, persecution of the opposition and hunting of political refugees. Volunteers encouraged passers-by to treat themselves to apples and to write their wishes on a huge birthday card which was later delivered to the Embassy of Kazakhstan in Warsaw. Warsaw residents wished for Nazarbayev to return to the path of democracy or to step down from power.

These developments were accompanied by street theatre performances. An actor, playing the role of General Jaruzelski, supported by passers-by, was striving to persuade Nazarbayev to step on the side of democracy through the symbolic gesture of a tug of war. ‘Jaruzelski’ wished for Nazarbayev to choose a peaceful path of transformation.

The demonstration was met with positive feedback and great interest from people eager to join the ‘celebration’ of the dictator’s birthday. This resulted in handing out more than 80 kg of apples, 500 leaflets and covering a 10-metre birthday card with greetings.

It was the second annual event, designed to draw the attention of Warsaw citizens to the problem of human rights violations in Kazakhstan. Just like the previous year, the birthday of President Nazarbayev, who has been governing the country for more than 20 years, took the opportunity to tell the public about the difficult situation of people in Kazakhstan.

More on this topic:
Nursultan Nazarbayev