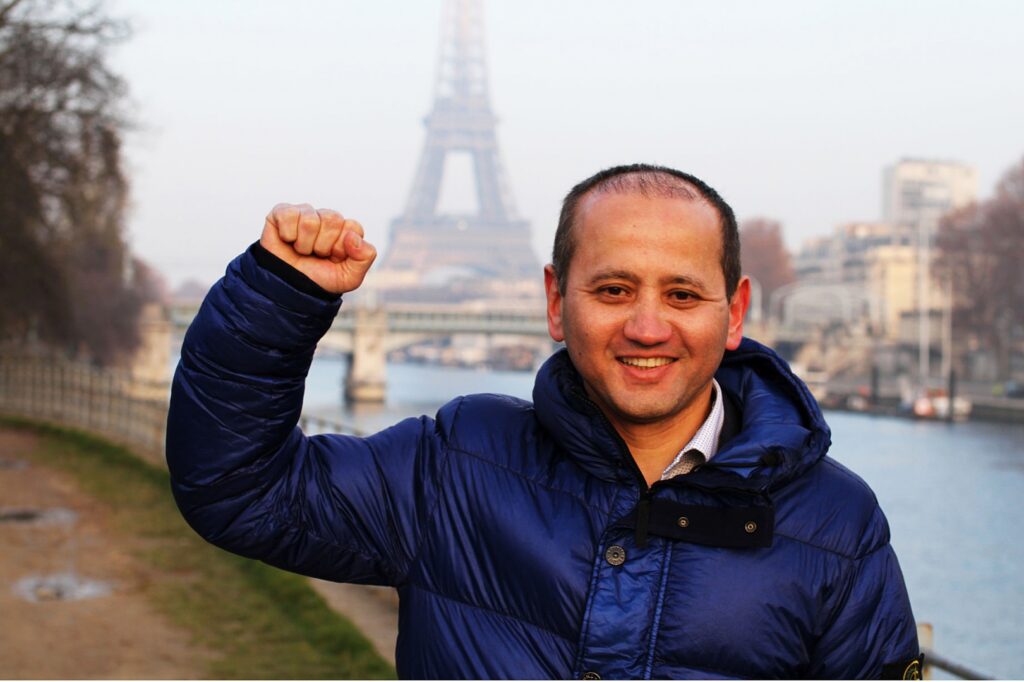 We are pleased to inform you that on 29 September 2020, the National Asylum Court of France delivered a historical decision granting refugee status to Kazakhstani opposition leader Mukhtar Ablyazov.

In its ruling, the Court recognised the existence of well-founded threats of persecution for political reasons and annulled the decision of the Director-General of the French Office for the Protection of Refugees and Stateless Persons (OFPRA) of May 31, 2018, which rejected his request for asylum.

ODF warmly welcomes this landmark decision and shares the findings of the jury, which carefully assessed the abusive and arbitrary modus operandi of the Kazakhstani regime towards Ablyazov and its political opponents in general: “(…) there are serious reasons to believe that the civil and criminal proceedings brought against Mr. ABLYAZOV under cover of the action of the BTA in Kazakhstan or in other foreign jurisdictions are in fact motivated by political aim.”

The ruling also made reference to Ablyazov’s business career and long history of political prosecution by the hands of Nazarbayev – the de facto ruler of the country – as well as INTERPOL’s 2017 decision to remove him from the Red Notice list and the Council of State’s 2016 refusal to extradite Ablyazov to the Russian Federation and Ukraine from France (upon the request of the Kazakhstani authorities): “The [Kazakhstani] ruling elites are guided by rent seeking through the ownership, control and distribution of enterprises and economic resources. In such post-Soviet economies, hostile takeovers (reiderstvo) of a business by non-commercial means are common, including forced bankruptcy, tax investigations, actual threats or criminal prosecutions, or the use of violence, especially when this company provides financial support to opposition political parties or activities.”

“Finally, there are very worrying indications of the risk of persecution, the unsuccessful attempts to extradite the person concerned to Ukraine and the Russian Federation presented to the French authorities, as well as the dissemination of an international arrest warrant and red notices to Interpol. These procedures, which were based on prosecutions brought on charges of financial embezzlement in the management of the BTA bank, have in fact turned out to be indirect maneuvers by the Kazakh authorities whose real political goal has finally been established in two parallel, reliable and independent procedures: On the one hand, by the Council of State in its decision of December 9, 2016 and, on the other hand, by Interpol in its decision of July 13, 2017. In this latter decision, Interpol found that it was established that, despite the common law character of the prosecutions founding the red notices relating to the applicant in the BTA affair, the motive of the Kazakh authorities presented a predominant political dimension”.

“Thus, according to Interpol, the criminal proceedings initiated in Kazakhstan in 2009 in the context of the BTA affair are based on a political motive. Consequently, all of the facts and accusations imputed to Mr. ABLYAZOV concerning alleged massive fraud committed to the prejudice of the BTA bank come from or are based on criminal proceedings opened in Kazakhstan or in the Russian Federation, the political motive of which was established in France by the Council of State and by Interpol and therefore emanate from the agent of persecution”.

The Democratic Choice of Kazakhstan movement

Mukhtar Ablyazov has been one of the most critical voices of Nazarbayev’s regime and is the founder of the “Democratic Choice of Kazakhstan” (DCK) peaceful opposition movement. The movement was first founded in 2001 and reestablished by Ablyazov in 2017: “(…) the political engagement of Mr. ABLYAZOV is still relevant and that his movement is prohibited in Kazakhstan”

“Mr. ABLYAZOV is a political opponent to the Kazakhstani regime currently in power. (…) he has already been the subject of persecution and threats of persecution for the same political reason by the authorities in power in his country and that he may well fear being persecuted again in the even of his return to Kazakhstan.”

“(…) his sentence in 2002 to six years in prison for “abuse of power, embezzlement and tax evasion” followed by his pardon decided by President N. Nazarbayev, after one year of imprisonment and ill-treatment, present all the characteristics of a common law conviction for political motive, a very widespread and practical mode of persecution against political opponents in the republics of the former Soviet Union.”

The prosecution and justice system in Kazakhstan

The court has also noted the systemic pathologies related to the functioning of the justice system in Kazakhstan: “The available public documentation makes it possible to establish that the Kazakhstani judicial and repressive apparatus is an instrument in the hands of power. Thus, the report of the American State Department on the situation of human rights in Kazakhstan in 2013, not denied by more recent sources, notes that prosecutors almost play a role of judge and that corruption is manifest at all stages of legal proceedings”. (…) Judges are subject to political pressure there and the entire judiciary is affected by corruption.”

“Arbitrary arrests, extrajudicial detentions and the torture of opponents in prison are in fact methods commonly practised by the Kazakh authorities.”

In March 2018, a Kazakhstani court banned the DCK and declared it “an extremist organisation”. Since then, thousands of supporters of the DCK have faced persecution and imprisonment; in the worst case the authorities’ fight against “extremism” resulted in the tragic death of a DCK activist, Dulat Agadil, murdered in police custody in February 2020.

In the last decade, we have documented at least 7,500 cases of politically motivated imprisonment and persecution in the Republic of Kazakhstan. Among these were opposition leaders, independent journalists, civil society activists and social media users who simply expressed support to the DCK manifesto, as well as Ablyazov’s associates and relatives who fell victim to Nazarbayev’s personal enmity against him.

Moreover, the court mentioned other high-profile cases of political prosecution that we had advocated for, all linked to Ablyazov’s legitimate opposition work. These included, amongst others:

In the context of the BTA lawsuit and Ablyazov’s alleged murder of a former BTA associate, the court also highlighted the political aim behind the civil and criminal proceedings brought against Ablyazov in Kazakhstan as well as in the UK, finding no credibility to both the fraud and the homicide allegations: “(…) neither the elements presented to the asylum judge nor the investigation do not, at the date of this decision, establish that there are serious reasons to believe that Mr. ABLYAZOV has committed in Kazakhstan financial crimes, massive fraud, breach of trust or embezzlement.”

“(…) in the light of these fundamental principles, the documents in the extradition file available to the Court do not make it possible to establish the credibility of the conditions under which a person definitively convicted on September 3, 2007 for the manslaughter of a third party could then ten years later to self-incriminate the murder of this same third party and to designate accomplices. It also emerges from the investigation that this self-incriminating testimony from Mr. Tokmadi was obtained when the person concerned had been arrested for other criminal acts unrelated to the case of the homicide of Mr. Tatishev.”

Kazakhstan’s interference in Britain and France

“(…) there are also precise, serious and consistent elements which highlight the clear attempts by external agents to exert influence on the asylum authorities and to get them to make decisions unfavorable to Mr. ABLYAZOV”

“This Court of Law also deplores overt attempts by third parties to influence the meaning of its decision”.

Kazakhstani civil society has won one more victory against Nazarbayev’s inhumane dictatorship. However, as stressed by the court, Kazakhstan’s “misuse of the criminal law and of the fundamental instruments of international criminal cooperation for a mainly political purpose constitutes a serious attack on the principle of mutual trust which is at the very heart of cooperation between States to fight against impunity and constitutes a form of persecution against the person who is a victim of such manoeuvres. This serious attack establishes that Kazakhstan is ready to divert powerful legal means, including in its international relations, in order to suppress a political opponent.”

“(…) The fact that the European Union has concluded a partnership and enhanced cooperation agreement with Kazakhstan enters into force on March 1, 2020, which contains in particular a section devoted to judicial cooperation, does not in itself call into question the foregoing observations on the proof of the political motive of the proceedings instituted against the applicant by Kazakhstan in the BTA case.”

Therefore, we believe that democratic states should immediately adopt and impose personal sanctions against those Kazakhstani officials responsible for gross human rights violations at home as well as abuse of international cooperation mechanisms. Still, within the country, the authorities keep prosecuting civil activists peacefully supporting the DCK and enjoying complete impunity.

“This use of the law as a weapon against opposition leaders has long been (…) the preferred mode of operation of the Kazakhstani regime, in order to maintain a semblance of legality and lessen criticism from the international community.” indicates the court quoting Professor David Lewis, an internationally recognized expert on civil society and Asian countries.