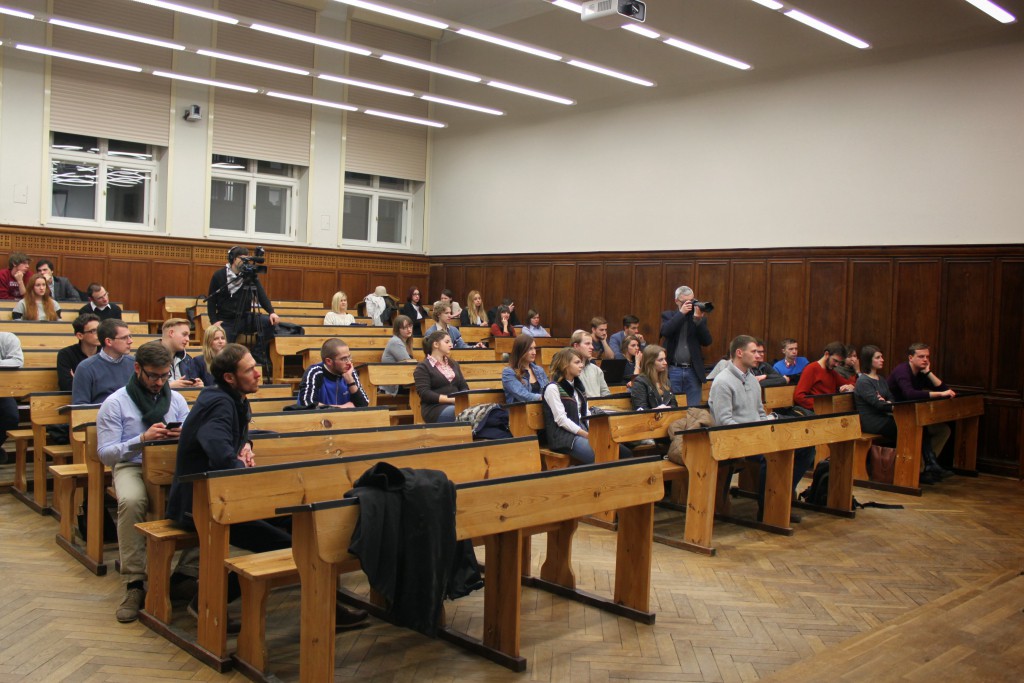 ‘Tales from the Maidan’ at the University of Warsaw

Who are the protesters on Ukraine’s Maidan? Do they believe in victory? By what means are the authorities striving to prevent an escalation of the protests? Participants of the ‘Tales from the Maidan’, organised by the students research circle ‘Ars Politica’ from the University of Warsaw on 23 January, 2014, sought to answer these along with many other questions.

The guests of the meeting were: MEP Paweł Kowal, Member of the Polish Sejm Marcin Święcicki, President of the Management Board of the Open Dialog Foundation Bartosz Kramek, as well as journalists of the Eastbook.eu portal: Tomasz Piechal and Konstanty Chodkowski. All the speakers have personally witnessed, at various stages, developments of the situation in Ukraine. They presented their observations chronologically, trying to reconstruct the development of the protests in Kiev.

– I was on the Maidan back in November, almost immediately after the dissemination of the first reports on developments in Ukraine. That initial Maidan had a completely different nature than what we are observing now. It was a grassroots initiative, joyful, almost festival-like, everything was done peacefully. At that time, we saw only the beginning of what was yet to come – stated Konstanty Chodkowski from the Eastbook.eu portal.

– I went to Kiev at the time when it was still a peaceful revolution of university students. People perceived the Maidan as the will of the people. Initially, the scale of expectations of young people and university students was relatively small; they only wanted the signing of an agreement with the European Union, while at the same time, the opposition were already demanding the resignation of Yanukovych. Later, these groups literally exchanged views – Paweł Kowal spoke at the University of Warsaw.

MEP stressed that it was too early to summarise or analyse the situation. Also, he had no doubt that one of the main actors in the Ukrainian issue is Russia, and that a decisive response of political leaders of the European Union countries is necessary. – Now is the time for every politician to answer the questions: “What can be done in this situation?”, “What have you done so far?” – Paweł Kowal summed up.

‘In a tight corner’

Marcin Święcicki observed the events in Kiev at the time when the Vilnius summit was still in progress. – Back then, there was still hope that Yanukovych would sign the association agreement. When the pen was not put to paper, the sentiment changed dramatically. The atmosphere deteriorated significantly, and attempts were undertaken to seize government buildings, despite calls by the opposition to cease such activities – Święcicki reported.
In his speech, he pointed out that the European Union had not recognised the fact that Ukraine was in a tight corner in terms of its financial situation, and the signing of an agreement with Russia has further deepened Moscow’s influence on Kiev. – As long as Ukraine is dependent on energy from Russia to the extent it is currently, each political team will be in a very difficult situation. If we want to help Ukraine, we must carry out activities aimed at reducing this dependence – Święcicki ended.

Tomasz Piechal stressed, in turn, that the revolution must be perceived in a holistic manner. – From the beginning, the Maidan was driven by very different forces: students, politicians, but also radicals and nationalists. This is the real problem of this revolution, which is terribly inconvenient for politicians. Another problem is the lack of a leader of the Maidan, particularly, I was amused by what was reported in the media regarding Klitschko supposedly being the leader of the protests – Piechal stated. He underlined that people are angry. – They said outright that they will not allow anyone to spit in their faces.

No concept for a solution

Speeches chronologically describing the situation in Ukraine were finalised by Bartosz Kramek, who stressed that the Maidan used to be a pro-European cheerful movement, and now it is full of frustration, fights are taking place, and the sentiment is radical. – Let’s remember, however, that a large part of the protesters are people who want change and do not want violent solutions. I also have a feeling that neither party has a vision or concept for a way out of the situation, to break free from the status quo, and the balance of victims is getting worse, there are more and more fatalities and casualties. There is a need for the world to do something to compel the European Union to react. The question arises: what else still needs to happen to prompt such a reaction? – he added.

He noted that the Maidan is expanding at an amazing rate, and the situation is dynamic altering quite literally, from minute to minute. He considered the behaviour of Special Forces shameful, and a contravention of all existing standards; people are afraid to go to hospitals, where kidnappings organised by officers of the security apparatus take place.

– I do not know whether it is possible to find a solution to this crisis in Kiev without involvement from the outside, and the longer it lasts, the more victims we will see – Bartosz Kramek added at the end of his speech.