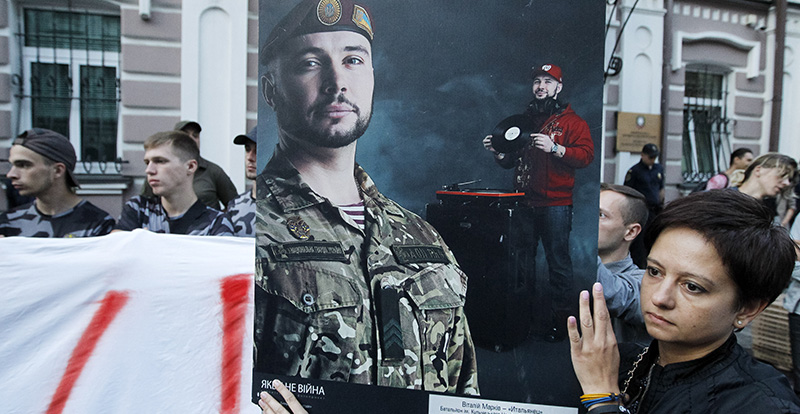 The Milan Court of Appeal acquits the Ukrainian National Guard’s Vitaly Markiv of all charges!

Yesterday, 3 November 2020, Vitaly Markiv, a Ukrainian former National Guard and holder of an Italian passport, was found “not guilty” of the charge of murder of Italian journalist Andrea Rocchelli. The reporter and his translator, Andrei Mironov, tragically died as a result of a mortar shelling in Sloviansk on 24 May 2014. At that time, the conflict zone was controlled by Russia-backed separatists.

With this decision, the Milan Court of Appeal reversed the previous sentence of the Court of Pavia which sentenced Markiv to 24 years in prison for his alleged involvement in the murder. The Ukrainian soldier was arrested in Italy in the summer of 2017 on charges of “complicity” in the murder of Andrea Rocchelli. Ukrainian investigators found the accusations brought against the 31-year-old Italian-Ukrainian citizen inconsistent and provided evidence that, on the day of the incident, shots had been fired from the Russian militant side. Unfortunately, such arguments were not considered by the court of first instance, with the Italian prosecutor refusing to carry out a thorough investigation in the field.

Since the very beginning, several international and Italian NGOs, including ODF, claimed his innocence and firmly denounced the presence of factual mistakes during the judicial proceeding and the inconsistency of the accusations. We also demanded the appeal court to provide an unbiased report of the events.

Similar accusations were brought against Nadia Savchenko, a Ukrainian military pilot and a volunteer who fought Moscow-backed separatists in Donbas during the first months of the conflict. Back in 2014, Savchenko was wrongfully accused of killing two Russian journalists in an artillery strike by the Russian side, despite evidence pointing to the contrary. President Zelenskyy also personally intervened in Markiv’s case, highlighting the political nature of the trial. As stated by Ukraine’s ambassador to Italy, Yevhen Perelygin, Markiv’s conviction was part of “Russia’s special operation set up in Italy to discredit Ukraine’s resistance to Russian aggression”.

For all these reasons, we warmly welcome the announcement of Markiv’s acquittal and consider this as an important blow against Russian propaganda’s interference in the Italian justice system.

The Open Dialogue Foundation together with its partner NGO, the Italian Federation for Human Rights, have supported the making of the investigative documentary “The Wrong Place”, which aims to find the truth surrounding the circumstances of the deaths of Rocchelli and Mironov. The documentary – an initiative of Italian military reporter Cristiano Tinazzi – is an important source of information which may have been considered by the appeal court. Another impartial analysis of the facts – which may have also contributed to Markiv’s acquittal – was released in early October this year. The findings were compiled by a working group composed of members of Memorial Human Rights Centre (Russia), the Centre for Civil Liberties (Ukraine) and international lawyers from the Centre de la protection internationale (France).

We are relieved by the news of Markiv’s release and we reiterate the importance of the integrity of the judiciary against Russian interference; however, we reaffirm the need to continue searching for the truth and finally provide justice to the family of Andrea Rocchelli.

Read also our reports and statements: