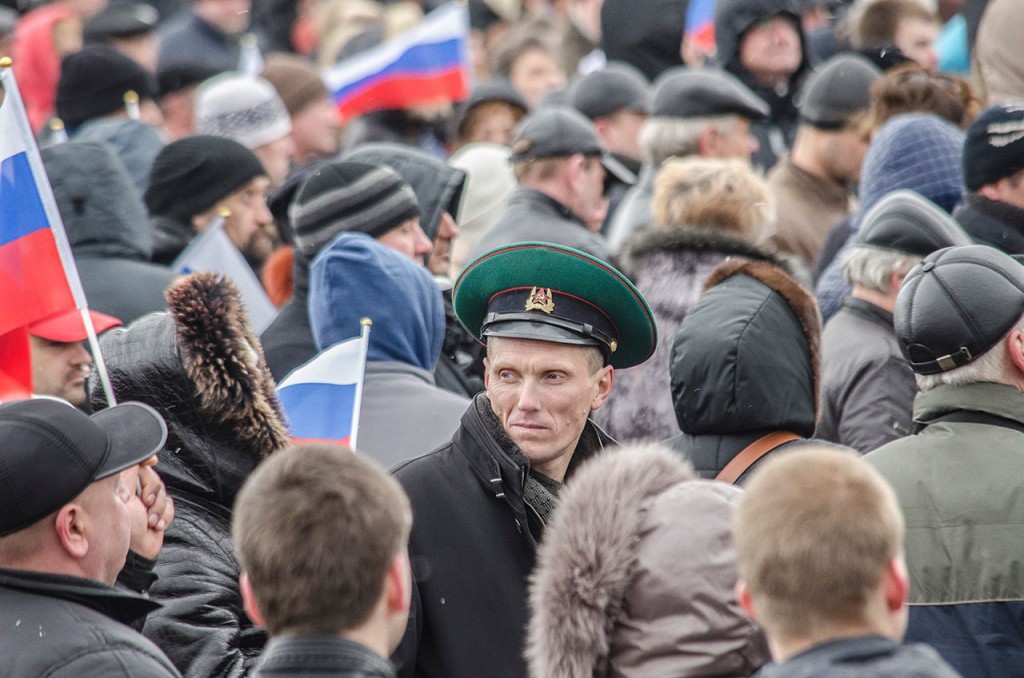 Flags of the Russian Federation are hoisted in all military facilities in the Crimea. Ukrainian servicemen are leaving the territory of the peninsula. Negotiations are also being carried out regarding an unimpeded withdrawal of logistics (including weapons and ships). As a result, the Russian military intervention of Ukraine has almost completely consumed the Ukrainian navy.

On 26 March, 2014, Chief of the General Staff of the Russian Armed Forces, Gen. Valeriy Gerasimov stated that Russian flags are hoisted in all 193 military units and institutions of the Ukrainian armed forces situated in the Crimean peninsula.

According to Gerasimov, all soldiers who have declared a desire to continue service in the Ukrainian armed forces, having surrendered their weapons under secure conditions, are preparing  an organised departure from the Crimean peninsula.

Previously, on 24 March, 2014, the head of the Verkhovna Rada of Ukraine, the acting president of Ukraine, Aleksandr Turchynov, signed a decree on the redeployment of military units and other units from the temporarily occupied territory of the Autonomous Republic of Crimea (ARC) and the city of Sevastopol to other regions of Ukraine. The National Security Council of Ukraine has also issued a decision to conduct the evacuation of families of the soldiers wishing to temporarily leave the occupied territory from the Crimean peninsula.A specific deadline for the withdrawal of the Ukrainian soldiers and their families is yet to be announced.

The military intervention in the territory of the Autonomous Republic of Crimea began on 27 February, 2014, when Russian soldiers captured the buildings of the Verkhovna Rada of Crimea and the Council of Ministers of Crimea in Simferopol. Thereafter, for several weeks, Ukrainian military units in the Crimea were subjected to blocking and capture. It was during one of the stormings, on 18 March, 2014, that a soldier of the photogrammetric information centre of the Ministry of Defence of Ukraine in Simferopol was killed.

Representatives of the rubber stamp government of the Crimea, as well as the heads of the Black Sea Fleet of Russia have constantly exerted pressure on Ukrainian soldiers, persuading them to cross over to the command of the Ministry of Defence of the Russian Federation. Soldiers of the Ukrainian units were given an ultimatum – to cross over to the military forces of the self-proclaimed authorities of the Crimea (in fact, Russia) or to voluntarily surrender weapons and leave the territory of the units. At the same time, families of the soldiers suffered, they were forcibly evicted from official residences. For example, on 8 March, 2014, Russian soldiers stormed the department of the Border Service ‘Shelkino’ (Kerch Peninsula). They broke into a shared apartment where families of Ukrainian soldiers lived and, pointing their guns at the residents, ordered them to pack up and leave the territory of the department within 10 minutes.

During the seizure of the Ukrainian units, their commanders were taken captive. And so, on 22 March, 2014, the airbase in Belbek was captured. The commander of the military unit, Yuliy Mamchur was taken captive by Russian soldiers. On 24 March, 2014, during the storming of the Theodosia Marine battalion, the battalion commander Dmitriy Delyatitskiy and his deputy, Rostislav Lomtev. Presently, they are free and remain outside the Crimea.Some details regarding the stay in Russian captivity were revealed by Yuliy Mamchur: “For three and a half days I was kept in solitary confinement. On the first, unknown Russian soldiers were talking with me constantly – they were trying to convince me to betray the military oath to the people of Ukraine and to join the service in the Russian army. Then, psychological pressure followed – I was not allowed to sleep, they were banging on my door with clubs”.

Not only military units, but also ships of the Naval Forces of Ukraine were captured. In order to prevent the redeployment of ships from the Crimea, all sorts of physical obstacles were created. For example, in order to block the exit of ships from the Southern Base of the Naval Forces of Ukraine on Donuzlav Lake (north-west of the Crimea), Russian soldiers sank two old ships. Thus, the route was blocked and Ukrainian ships became trapped.In Sevastopol, Ukrainian ships were also prevented from going out into open waters by the ships of the Black Sea Fleet of the Russian Federation. The team members of Ukrainian ships refused to cross over voluntarily to the side of the self-proclaimed Crimean authorities, and so the ships were stormed. On 25 March, 2014, the last ship of the Naval Forces of Ukraine in the Crimea – the trawler ‘Cherkasy’ was captured. The ship was stormed with the use of 2 helicopters and 3 high speed powerboats.

In general, the occupation of the Crimea by Russian armed forces has turned into a real disaster for the fleet of the Naval Forces of Ukraine. Thus, as of 26 March, 2014, it has only 10 ships (of which only 2 are fighting vessels, 3 are auxiliary ships , another 5 are powerboats). Russian soldiers have captured 51 ships.

For safety reasons and to prevent escalation of the conflict, Ukrainian troops are being withdrawn from the territory of Crimea. Numerous soldiers (mostly, residents of the Crimean peninsula) have crossed over to the side of the self-proclaimed authorities of Crimea. Of a total of 18,000 troops stationed in the Crimea before the Russian occupation, approx. 5000 soldiers remained faithful to Ukraine. This was announced by Deputy Defence Minister, Leonid Polyakov. Negotiations on the withdrawal of weapons continue. According to preliminary calculations, Ukraine’s losses due to the Russian occupation of Crimea are estimated at 18 billion dollars.

‘Inaction’ of Ukrainian authorities during the occupation of the Crimea

From the early days of the Russian occupation of the Crimean peninsula, Ukraine authorities have taken the position that it is necessary to prevent escalation of the conflict and its development into an armed conflict.

Despite the blocking and frequent attempts to enter the territory of the Ukrainian military units by the so-called ‘self-defence forces of the Crimea’, Russian Cossacks and soldiers, Ukrainian soldiers were banned from using firearms. Martial law was not officially introduced, which means that only soldiers on guard had the right to use firearms. As a result, military facilities had to be defended practically by hand-to-hand combat. “We had no right to shoot. Some time ago, Tenyukh (former Minister of Defence of Ukraine – Ed.) stated that we were ordered to use weapons, but people who are far from military service, do not understand what it means. In military units, not guard duty, but routine duty is undertaken. Guard duty protects only armory. In the case of someone’s penetration into the military unit, a soldier can only call the police. If he starts shooting, he will be held criminally responsible”, – officer of the Naval Forces of Ukraine, Sergey Pidkopaylo, explained.

The only lawful way to permit the use of weapons would be to announce martial law;  however, the government of Ukraine did not find this appropriate. Former Minister of Defence of Ukraine (who was in tenure before 25 March, 2014 ) explained this position with the fact that there was no open military aggression by the Russian troops in the Crimea, as the Russian leadership did not officially recognise the presence of its troops on the peninsula (except for the Black Sea Fleet of the Russian Federation). Sergey Pidkopaylo believes that the grounds for imposition of martial law were still present: “Martial law is introduced not only during wars, but also in instances of appearance of illegal armed groups, terrorist threats, capturing of the authorities and local self-government – all the above occurred in the Crimea. The leadership did not take responsibility for inaction, and now we can be declared traitors. I defended my military unit the only way that I could – with an ordinary stick”.

Many soldiers complained that the central leadership of the Ukrainian Armed Forces left military units in the Crimea without support, and no specific orders (except for the order not to provoke conflict) were issued. “We waited for an order from Kiev until the last moment, but it did not come. How long would the crew be able to resist the attack? We’re not on land, sooner or later, we would run out of food. We were completely isolated from the outside world”,- Artem Shurabenko, senior gunner of the strike assault ship ‘Konstantin Olshanskiy’ stated (the ship was captured by Russian soldiers on 24 March, 2014). It is due to the very ‘inaction’ of the central leadership of the Armed Forces of Ukraine that many soldiers have decided to cross over to the side of the self-proclaimed authorities of the Crimea.

The decision on the withdrawal of Ukrainian troops from the Crimea is the only option in the current situation. Ukrainian soldiers must not be endangered in terms of quantitative and technical superiority of the enemy, and in the face of constant provocation by pro-Russian individuals and Russian intelligence agencies.

The Open Dialog Foundation hereby urges the Ukrainian authorities to withdraw from the Crimean peninsula, within the shortest possible time, those Ukrainian soldiers who expressed a desire to continue to serve in the Armed Forces of Ukraine, as well as their families. We also call for providing them with a full package of social protection, including housing and employment and education opportunities for their families.

The occupation of the Crimea by troops of the Russian Federation, as well as further Russian annexation of the region was a result of the insolvency of the signatories of the Budapest Memorandum, which failed to fulfill their obligations to guarantee the territorial integrity and security of Ukraine. The Crimean crisis undermines the whole system of regional security in Europe, established after the ‘cold war’, and has set a dangerous precedent in the redrawing state borders in the 21st century through military aggression.

Officially, the Kremlin continues to refuse to recognise the legitimacy of the new Ukrainian authorities and refuses bilateral dialogue. International conflict resolution mechanisms are also completely ineffective – Russia as a permanent member of the UN Security Council blocks every initiative aimed at resolving the crisis in Ukraine. While doing so, the Kremlin continues its attempts to destabilise the situation in Ukraine by exacerbating separatist sentiment in the south-eastern regions of the country. At the same time, a large number of offensive weapons are being brought to the borders of Ukraine. All this testifies to Russia’s intentions to continue their occupation of Ukraine.

In parallel to these actions, tightening of the regime in Russia itself is ongoing – any public disagreement with the actions of the authorities result in criminal liability and possible reprisals. Independent Russian media outlets are on the verge of extinction.

In fact, we see the formation of a totalitarian state – an aggressor threatening the security of the world with its operations. The world community must respond to Russia’s actions in the most by the most assertive and decisive means. Targeted sanctions, introduced earlier by the United States, Canada and the EU states against individual Russian officials did not affect the position of the Russian authorities in any way, and, moreover, gave them confidence in their impunity. In order to stop the aggressor, democratic states should act in the most decisive possible manner. All possible leverages of pressure, up to economic isolation, should be applied to Russia.

More on this topic:
Crimea