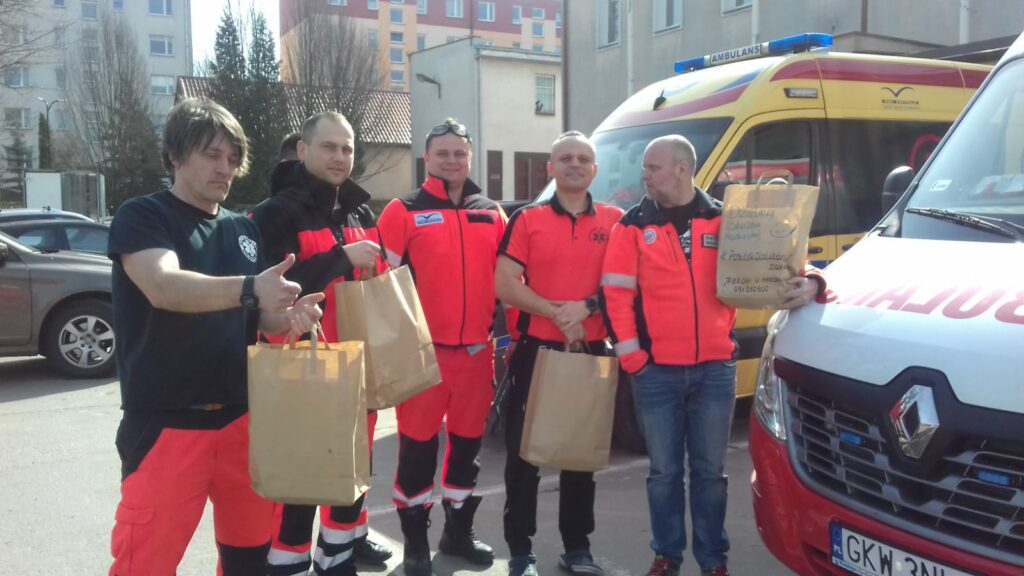 The action “Meal for a Doctor” (#MealForADoctor) was organised on the initiative of Patryk Wachowiec, legal analyst of the FOR (Civil Development Forum) Foundation and Marcin Mycielski, Member of the Board of Directors of the Open Dialogue Foundation (ODF) on 15 March 2020, in the face of the global COVID-19 pandemic that put, among others, the Polish health service in an unprecedented situation. The so-called lockdown introduced in Poland on the night of 13/14 March 2020 forced the immediate closure of restaurants, which from then on could only operate by delivering ordered meals. In these circumstances, the idea of supporting doctors, nurses, paramedics and all other healthcare professionals by providing them with free meals at the workplace was born. A secondary, yet important intention of the originators was the desire to help the small catering industry survive the crisis.

The financial basis of the action was a fundraising campaign conducted on the Zrzutka.pl portal (https://zrzutka.pl/posilekdlalekarza; http://posilekdlalekarza.pl/), launched by our colleague Marcin Mycielski. The activities were undertaken jointly by three NGOs: FOR, ODF and the Niskie Składki (Low Contributions) and Spontaniczny Sztab Obywatelski (Spontaneous Civic Staff) associations. We also received the support of several individual volunteers. Due to previous experience in organising crowdfunding campaigns and handling public fundraisers (from the period of support for Ukraine in the years 2013–2015 during the Maidan and resistance to Russian aggression), the ODF became the financial operator of the action. The Foundation has thus become actually and formally responsible for the accounting and settlement of the funds raised, which were transferred to its account.

However, the biggest organisational challenge was communication with almost thousands of interested restaurants and health care professionals. Over time, this has forced us to, among other things, close the temporary hotline and restrict the project to e-mail communication. The dynamic and often dramatic situation in the health care and catering sectors had its impact both on the scale of needs and the circumstances in which we had to implement the action. A considerable effort was made, among other things, to verify the correctness of settlement documents sent by the restaurants and to cooperate with them in this regard. We acted spontaneously, adopting and adjusting our procedures overnight.

In the first stage (from 15 March to 13 April), the action was based on lump-sum settlements with restaurants that — after social media announcements and media coverage — approached the organisers and took part in the action. In response to the announcement posted on the Internet, more than 800 restaurants registered immediately, 257 of which effectively took part in the action and provided meals to health care professionals.

The initial rules provided for spending a maximum of PLN 800 gross per restaurant (or a catering establishment — sometimes a single company had for example 2–3 restaurants) every week. This figure was estimated on the basis of the amount and dynamics of the increase in funds that flowed into the campaign account. Catering establishments declared that they would provide the doctors with meals for 7 days. In practice, restaurants were often sending documents for higher amounts — there was no doubt that they provided higher value deliveries, although we did not refund any excess expenses. Most often, the limits of PLN 800 were depleted much faster, in many cases within 1–2 days, although there were also cases of settlements for only several dozen zlotys.

The first stage of the action covered two to three (in the case of a few restaurants) weeks of meal delivery to hospitals and other medical facilities. Settlements with the participating restaurants were made on the basis of issued invoices or special declarations (together with attached photographs of fiscal receipts) in several rounds. This process depended on how quickly we received the necessary documents (we also required photographs of the meals being handed over to the medical staff).

At this stage, we managed to reach medics in about 200 facilities: hospitals as well as hospital wards, clinics and ambulance stations. These data are only estimates, as the initial assumptions did not require restaurants to provide us with accurate data about the places where meals were delivered. A detailed list of all participating restaurants is presented on the following pages.

During the first few days, the action became one of the largest crowdfunding campaigns to fight the pandemic on the Polish Internet and was one of the largest fundraisers conducted on the Zrzutka.pl portal (which promoted #MealForADoctor on its main page). Ultimately, the amount of PLN 681,012 was raised with the help of 11,915 sponsors. According to the portal, the action was shared 28,844 times.

In the first stage, we spent PLN 194,287.82 on settlements with restaurants. Statistically, this means an average expense of PLN 755.98 per restaurant. In terms of the number of medical facilities (approx. 200), the average value of the support was PLN 971.44 per facility.

The second stage of the campaign started on 14 April in connection with the establishment of cooperation with the national initiative #CallingForMeals (Pol. #WzywamyPosiłki — www.wzywamyposilki.pl) and a change in the operating model. 114 catering companies and other institutions took part in it, including, among others, a kindergarten with a large kitchen. Until 15 May, these institutions provided meals to 66 hospitals and other medical facilities.

#CallingForMeals and their volunteers in all voivodeships became a new organisational structure that took over the coordination and communication with restaurants and hospitals, i.e., in practice, the responsibility for ensuring the delivery of meals. The ODF remained the financial and accounting operator of the action, and the ongoing #MealForADoctor fundraiser provided funds for the restaurateurs involved at this stage (the so-called meal partners), who were to receive them after its completion. The previous experience and commitment of the new partner allowed for the professionalisation and consolidation of the previously very spontaneous and dispersed activities.

Deliveries were received each time with a confirmation signed by the recipient associated with the health service. They were verified and passed on to us by regional #CallingForMeals coordinators who have done a tremendous job. Settlements with restaurants who took part in the action in its second stage have been carried out after it was finished and all documents were completed. The last settlement with a restaurant was made on 15 June 2020.

A separate aspect of the action were in-kind donations from corporate partners — companies donating certain goods (food, but also e.g. hygiene products) to hospitals formally through the ODF. Their total value amounted to PLN 112,820.86 — a detailed list is presented in this summary.

PLN 13,000 from the funds raised was allocated to cover part of the costs related to the broadly defined administrative support of the action. This allowed for the financing of two contracts for mandate and two invoices issued by our associates who, in the period from 15 March to 15 June 2020, dealt with the administration and settlement of the fundraiser and coordinated the work of the volunteer team. It accounted for 1.9% of all funds obtained during the action.

On 23 July 2020, we donated PLN 58,104.19 to support the City Hospital No. 4 in Gliwice in the form of a targeted donation to cover urgent expenses related to the COVID-19 epidemic, in particular for the purchase of protective equipment and dialysis unit equipment. These funds remained after the settlement of both the first and the second stage of the action. By spending them, we finished the action and settled all the funds raised. Together with the value of in-kind donations, the total value of the aid provided was therefore nearly PLN 800,000 — exactly PLN 793,932.86.

In addition to the “core” activity of the action consisting in direct cooperation with the catering sector, #MealForADoctor and the ODF have also established cooperation with the DzialajmyRazem.pl (Let’s Act Together) initiative supported by the Rzeszów-based company G2A, which has become a platform connecting those in need of help due to the pandemic with entrepreneurs who were able to offer their support. At the beginning of the campaign, a secondary (yet intensive) activity was the direct association of companies (food producers and wholesalers) with hospitals, as both of them started reaching us at that time. Over time, we started directing them to the G2A platform, and, after establishing cooperation with #CallingForMeals, the Foundation became an intermediary who — as a non-governmental organisation — signed in-kind donation agreements with corporations and then transferred the received aid to medical facilities.

The results of the activities carried out, including the information on the value of funds raised and the settlements with restaurants, were published on an ongoing basis in the social media of the #MealForADoctor campaign (Facebook, Twitter) and on the website of the fundraiser, as well as on the pages and social profiles of the Open Dialogue Foundation and other organisers.

The coordinator of administration and settlement of the action was Rafał Matouszek.

Bartosz Kramek
Head of the Foundation Board, Proxy of the Open Dialogue Foundation