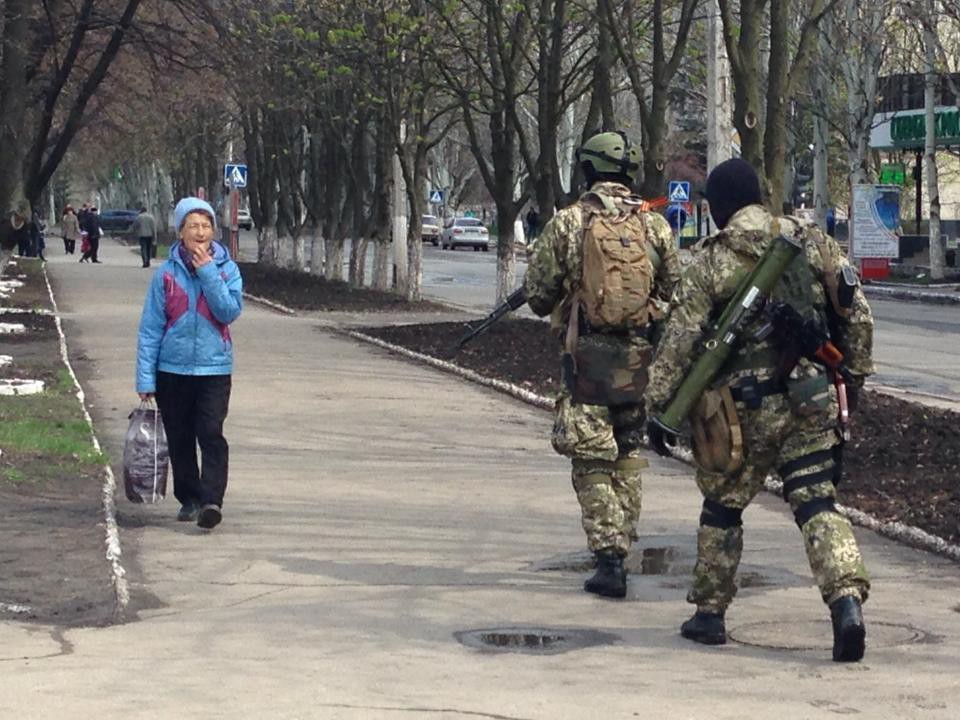 15 April 2014 | Editorial office
Table of contents:
The anti-terrorist operation in SlavyanskSubversive actions with the use of firearms in eastern Ukraine are held with the support and coordination of Russia’s special servicesThe apparel of militants who took part in the capture of administrative buildings in the East of Ukraine

Small groups of separatists, supported by Russian Special Forces have taken control of several cities in eastern Ukraine. One person was officially reported dead and approx. ten wounded by gunfire. The Ukrainian authorities have decided to launch a large-scale anti-terrorist operation involving the Armed Forces of Ukraine.

At the moment, the situation is aggravated in three provinces in the east of Ukraine, bordering with the Russian Federation – Donetsk, Lugansk and Kharkov. Over a week ago, on 6 April, 2014, small groups of a few-hundred people seized government buildings in Donetsk (the buildings of the Regional State Administration (RSA) and the Security Service of Ukraine (SSU), Lugansk (the SSU building) and Kharkov (the RSA building). During the seizure of the SSU buildings, arsenals were looted. Following this, separatists declared the independence of the ‘captured’ regions of Ukraine, as well as the need for a local referendum regarding the status of the regions.

On 8 April, 2014, as a result of the special operation, Ukrainian security services managed to seize back control of the building of the Kharkov Regional State Administration. During the recapturing of the building, approx. 70 separatists were detained. Throughout the week, negotiations between separatists of the Donetsk and Lugansk province and the Ukrainian authorities have been held, however, they have proven to be unsuccessful.

On 12 April, 2014, the situation began to exacerbate – groups of militants, effectively shielded by a small number of civilians, began to seize government buildings in other cities of the Donetsk Province, namely: Artemovsk, Gorlovka, Druzhkovka, Yenakievo, Kramatorsk, Krasnoarmeyske, Krasnyi Liman, Makeyevka, Mariupol, Slavyansk and Khartsyzk. Events in all cities developed more or less identically – police stations or SBU buildings were captured (with subsequent looting of arsenals). Before the capture of the city council buildings, checkpoints at the entrances/exits of the towns and on the driveways to strategic facilities were set up (airports, railway junctions). This indicates that the developments were in fact a planned special operation.
Clashes between supporters of Ukraine’s unity and pro-Russian activists took place in Mariupol and Kharkov. The pro-Russian activists attacked and severely beat activists advocating the integrity of Ukraine. In Mariupol, approx. 20 people sustained severe injuries. In Kharkov, clashes resulted in about 50 people being injured, 10 of which were hospitalised.

The anti-terrorist operation in Slavyansk

On 12 April, 2014, in Slavyansk (Donetsk Province), several dozen armed men seized a district police station. As during the Crimean events, they were wearing identical, unmarked camouflage uniforms, and were well armed. The invaders didn’t put forward any demands, but stated that they are supporters of the self-proclaimed ‘People’s Republic of Donetsk’. During the capture, smoke pellets were used and bullets were fired into the air. According to eyewitness reports, the occupants, pointing their guns at people, scared off bystanders from the police building and forbade them from filming or taking photographs.

Military checkpoints were set up at the entrances to the city. In the morning of 13 April, 2014, Interior Minister Arsen Avakov stated that an anti-terrorist operation (ATO) had been launched in Slavyansk under the leadership of the Security Service of Ukraine. During the ATO, an exchange of fire took place at the checkpoints at the entrance to the city. In the shootout, one SBU worker was killed (captain Gennadiy Bilychenko), and five other law enforcement officers were injured. An exchange of fire also took place in the city centre. Due to the losses, the ATO has been suspended. Now the city is under the control of separatists. On 14 April, 2014, in Slavyansk, gunmen arrived from the Crimea. They stated that they had arrived in the city in order to bring about a ‘bright future’ for the city residents.

The pattern, according to which the developments take place in the cities and towns of eastern Ukraine, is very similar to that of the Crimean events. The seizure of administrative buildings is carried out by well-armed militants, whose behaviour clearly indicates that they have undergone special military training. Civilians who serve as ‘human shields’, are acting in collusion with them. Video footage showing the capture of the district police station in Kramatorsk clearly shows the gunmen operating with coverage provided by several dozen civilians.

It should be noted that the militants have state-of-the-art weapons which are not part of the arsenal of the Ukrainian army, yet the army of the Russian Federation is equipped with them. They are also dressed in types of clothing, which is widespread in the armed forces of the Russian Federation. The fact that militants have ‘professional’ equipment was also confirmed by UN observers.

On 14 April, 2014 the transcript of an intercepted telephone conversation of the ‘Slavyansk militants with the leadership of Russia was published in the media. The record shows that eastern Ukraine is experiencing a large-scale military operation, which is to be implemented by the reconnaissance and sabotage forces of the Main Intelligence Directorate of the General Staff of the Russian Armed Forces. On 14 April, 2014, an operation aimed at seizing the police station in Gorlovka was headed by the Russian army lieutenant colonel. The evidence which proves that the seizure of administrative buildings in the Donetsk Province was carried out with the participation of the military forces of the Russian Federation, are the repeated detentions of Russian intelligence officers in Ukraine. Also, eyewitnesses report that the invaders have typical Russian accents and use words, unusual for the region.

Separatists have a low percentage of support among the local population A characteristic feature of the pro-Russian and separatist actions and in the cities and towns of Eastern Ukraine is the limited number of their participants. So, in Kharkov and Donetsk, with the population of each of the cities exceeding 1 million inhabitants, the pro-Russian rallies are attended by 5,000 persons. In district towns, similar rallies are attended by several hundred people. According to the latest opinion polls (conducted in February 2014), in South-Eastern provinces of Ukraine, only 12.5% support the idea of joining Russia. 74.5% of the population strongly oppose the idea, while 13% – have not yet determined their attitude. Sabotage and inaction of local law enforcement bodies During the armed seizures of administrative buildings in the cities and towns of eastern Ukraine, local police offered no resistance. The buildings of the local police department and the SBU, as well as weapons arsenals were captured with the utmost ease. All this may indicate that the separatist actions are supported by the regional elites, which have an impact on the police. For example, according to journalist, Anatoly Mogilev, a member of the Party of Regions and former Prime Minister of the Autonomous Republic of Crimea was involved in the organisation of the seizure of the police station in Slavyansk.

According to the Ukrainian military expert, the head of the ‘Information resistance’ centre, Dmitriy Tymchuk, approx. 70% of the police officers in Donetsk Province are on the side of extremists or are openly engaged in sabotage. “Today we received information that some of the leaders of separatist groups gave orders to their subordinates not to shoot at the local police – saying, that there are on ‘one the same side’. According to our data, the policemen are tempted by agents of the Russian special services and extremists by the high salary which is reportedly paid to police officers in Russia; Ukrainian policemen are paid $300 a month, whereas in the neighbouring Rostov Province, an ordinary employee of the Russian police receives $1,200. This instills a desire to become ‘part of Russia in the traitors”, – the expert stated. Ukrainian authorities announced the involvement of the Armed Forces of Ukraine in the anti-terrorist operation

On 13 April, 2014, the Speaker of the Ukrainian Parliament and concurrently acting president, Aleksandr Turchynov enunciated that the Council of National Security and Defence of Ukraine issued a decision to involve members of the Armed Forces of Ukraine in the anti-terrorist operation in eastern Ukraine.
The involvement of the Armed Forces of Ukraine is explained by the fact that Ukraine considers the developments in the eastern regions as a continuation of military aggression by the Russian Federation. In turn, the Party of Regions, which has become the opposition and is considered a pro-Russian force, called on Ukrainian soldiers not to obey orders from Kiev.
On the evening of 13 April, 2014, in Rostov-on-Don, former Ukrainian leaders: ex-president Viktor Yanukovich, former General Prosecutor Viktor Pshonka and former Interior Minister Vitaliy Zakharchenko held a press conference. Viktor Yanukovych once again stated that the power in Ukraine had been captured by extremists; he also remarked that in fact, a civil war had broken out in the country. On 13 April, 2014, an emergency meeting of the UN Security Council was held. Representatives of the U.S., the UK, France and Australia expressed their sharp condemnation of Russia’s role in the developments in Ukraine. They noted that the events currently taking place in eastern Ukraine are similar to those in the Crimea. “We can see that the explosion of violence in eastern Ukraine is not spontaneous. We can see that the Crimean events are being mirrored – first, aggressive pro-Russian people are acting, and they are followed by disciplined armed men in masks and camouflage uniforms. All this is spread through the Internet. Despite the objections of Russia, its assurances must not be believed. Russia does not understand that the Internet exists, and it denies the obvious”, – the representative of France, Gerard Aro, stated.

The nature of the developments in Donetsk, Lugansk and Kharkov provinces clearly indicates the beginning of implementation of the Russian ‘Crimean plan’ in these regions. Small, but still well-trained groups of armed militants took control of several cities and towns in eastern Ukraine. Acting under the coverage of minor groups of civilians, the militants hinder the possibility of carrying out anti-terrorist operations, as there is a risk of civilian fatalities. The vast majority of local residents do not support separatists, but are afraid to stand up against them, for fear of reprisals (which was the case in Mariupol and Kharkov).
The main issue which prevents the Ukrainian authorities from a military solution of the conflict, is the accumulation of a large number of Russian armed forces on the border with Ukraine. Any use of force could provoke the invasion of Ukraine by Russian troops. To prevent this, the global community must respond to the Russian aggression with the most stringent possible measures.
The Open Dialog Foundation welcomes the recent decision of the Parliamentary Assembly of the Council of Europe, depriving Russia of voting rights until the end of 2014. We believe that Russia abuses its membership of international organisations by blocking important decisions in Ukraine and lobbying its own interests. By hiding on its territory Viktor Yanukovych and Vitaliy Zakharchenko who are wanted by Interpol, Russia is violating its commitments to the organisation. In this connection, suspension of Russia’s membership in the OSCE and the UN remains a crucial issue, also, the need to raise the issue of excluding Russia from the Interpol system. Unless urgent necessary measures are taken, the situation in eastern Ukraine may escalate into a large-scale military conflict. Peaceful negotiations with the extremists have been unsuccessful, which may suggest that extremists are deliberately ‘fomenting’ the conflict. In order to resolve the situation, the international community should provide assistance to Ukraine (both material and theoretical) in organising and conducting anti-terrorist operations.